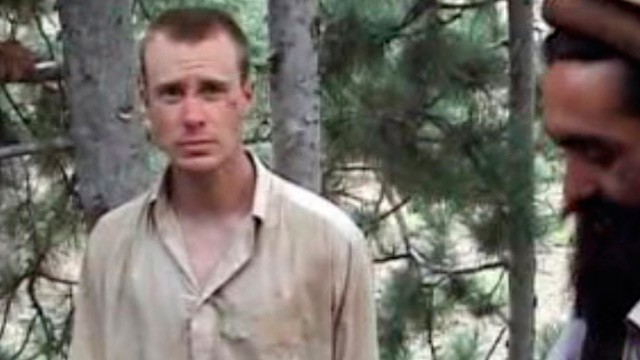 A Patsy For 5 Vicious Killers

Barack Obama and the coterie of Communists that surround him is nothing less than a dagger thrust into the heart of America by a cabal of satanists paid for by banksters and billionaires and covered by the Central Intelligence Agency. Everything he does has an overt or covert agenda to destroy America.

Enter the story of Bowe Bergdahl.

In 2009 he was a disaffected Private First Class pining away in Afghanistan. Originally, reports of the soldier’s disposition implied desertion, not capture:

Two U.S. officials told The Associated Press Bergdahl had “just walked off” his base with three Afghans after his shift. ~ Timeline of Bowe Bergdahl’s Ordeal, Twin Falls Times-News

Other sources claimed to have inside information that Bergdahl was “an e[m]barrassment to everyone who has worn the uniform. He made it to two towns and was asking for water when the locals turned him over to the Taliban.”

…in the weeks before his capture, Bergdahl had made murky statements that suggested he was gravitating away from the soldiers in his unit and toward ­desertion, a member of his platoon told Rolling Stone.

“He spent more time with the Afghans than he did with his platoon,” former Spc. Jason Fry told the magazine in 2012.

As a teen, the home-schooled son of Calvinists took up ballet — recruited to be a “lifter” by “a beautiful local girl,” Rolling Stone reported — “the guy who holds the girl aloft in a ballet sequence.” The strategy worked — Bergdahl, who also began dabbling in Budd­hism and tarot card reading — soon moved in with the woman. ~ The Bizarre Tale of America’s Last Known POW, Michael Gartland, New York Post

But amidst the euphoria of the media over this diplomatic coup, Bergdahl’s father had the impropriety to “tweet” something indiscrete: 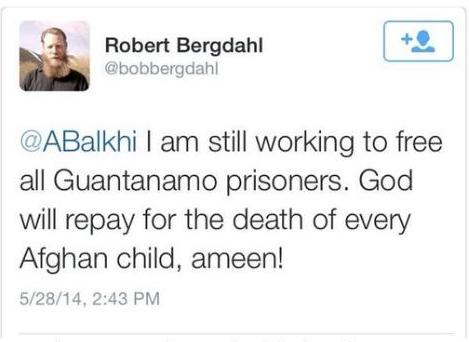 He also had this to say about “democracy”: 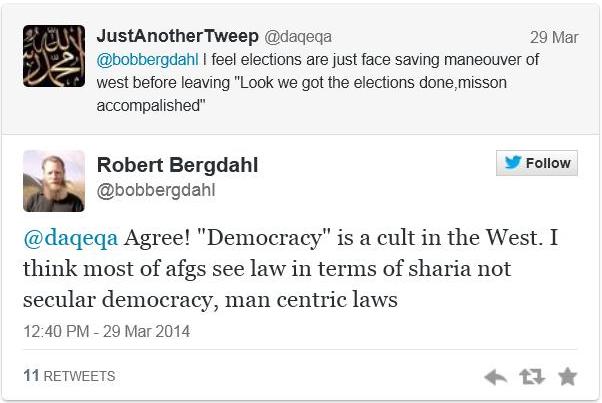 He was quick to delete the sentiments but that darn “screen capture” is damned inconvenient.

By appearance, Bob Bergdahl has come a long way from “Calvanism”. 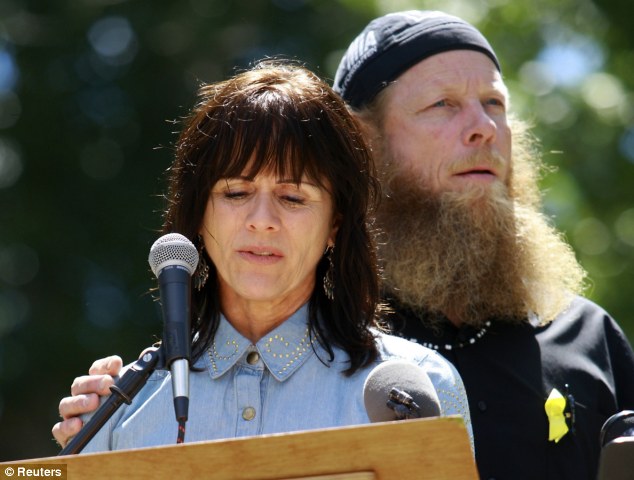 Like everything else he’s done, the puppet insurgent president sauntered out to the cameras and crowed about the wonderful accomplishment he’s delivered America.

However, when he gave the microphone over to Bob Bergdahl and his lovely wife, the two did not strike a picture of American Gothic. What was Bergdahl saying?

Immediately, good people with some language skill wondered what was going on.

I don’t know about you, but POW’s I’m familiar with didn’t “forget” their native tongue and quickly learn the language of their captors.

Another inside source had this to say about good ole’ Bowe when he first got to Afghanistan: 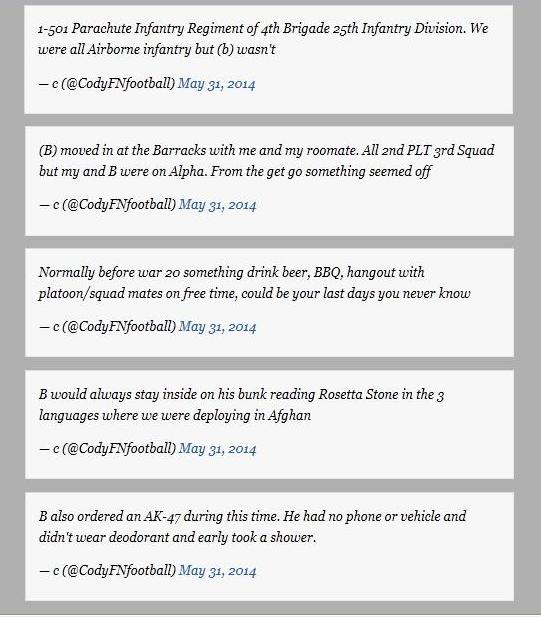 In return for the boy Taliban, jihadists got quite a brood of vipers. The UK Telegraph called them the five pillars of old Taliban regime, including Khairullah Khairkhwa who knew Osama bin Laden personally. Conveniently, he was also a chief opium smuggler:

…he was “directly associated” with both Osama bin Laden and Mullah Mohammed Omar, the “supreme commander” of the Taliban. Khairkhwa was also “one of the major opium drug lords in western Afghanistan”. ~ Five Pillars Of Old Taliban Regime, Telegraph

It had been known for years that, should they be released, they would immediately start working new plots to kill Americans.

All five terror suspects the Obama administration exchanged for the release of Sgt. Bowe Berghdahl on Saturday were deemed in a 2008 Pentagon dossier to be “high risk” for launching attacks on American interests if released. ~ Terror Suspects Freed by Obama Admin. Were Labeled “High Risk” In 2008, Kellan Howell, Washington Times

Apparently, this was such a great deal, Barack the Most Merciful had to bend a few rules to make it happen and whisked away his prizes before telling Congress what was going on.

Top Republicans on the Senate and House armed services committees went so far as to accuse President Obama of having broken the law, which requires the administration to notify Congress before any transfers from Guantanamo are carried out.

“Trading five senior Taliban leaders from detention in Guantanamo Bay for Bergdahl’s release may have consequences for the rest of our forces and all Americans. Our terrorist adversaries now have a strong incentive to capture Americans. That incentive will put our forces in Afghanistan and around the world at even greater risk,” House Armed Services Committee Chairman Howard P. McKeon (R-Calif.) and the ranking Republican on the Senate Armed Services Committee, James M. Inhofe (Okla.), said in a joint statement.

Lawmakers were not notified of the Guantanamo detainees’ transfer until after it occurred. ~ Bergdahl Release Arrangement Could Threaten The Safety Of Americans, Republicans Say, Karen Tumulty, Washington Post

Feeling the heat, messiah’s Secretary of War rushed to the podium to proclaim that boy Taliban’s ”life was in danger”—they had to move fast!

Personally, I don’t know what all the fuss is about. They’ve done far worse than this with the smiling approval of the “Opposition Party”.

Remember how I said Bergdahl was a Private First Class when he deserted his post? Notice how all of messiah’s propagandists are proudly proclaiming him SERGEANT Bergdahl now.

A U.S. soldier captured in Afghanistan in 2009 has received his second promotion while in captivity, U.S. Central Command announced Friday.

Brig. Gen. Rick Mustion, the adjutant general of the Army, traveled to Bergdahl’s hometown of Hailey, Idaho, on Thursday to deliver the promotion certificate to his parents.

The Army has been giving Bergdahl promotions that would have come to him had his Army career gone as planned. If he returns home safely, the Army will give him all the back pay that he has earned while in captivity. ~ Captured U.S. Soldier Receives Second Promotion In Two Years, CNN

If you’ve ever served time in the military (especially in a real unit) you’d know that no one slides into a promotion unless they rate it. Sometimes their chain of command is asleep at the wheel and on rare occasions, the skids get greased for someone … “special”.

Well if only he had stayed with his friends a few more years, he might’ve left Afghanistan as a Sergeant Major!

At least one foreign media source is slamming the boy Taliban hard:

Daily Mail: “Bowe Bergdahl deserted and these Americans lost their lives searching for him”: The bitter backlash from soldiers who served with Taliban POW as the SIX men who were killed looking for him are revealed.

* The Facebook group “Bowe Bergdahl is NOT hero!” has 5,400 members
* Men who served in his unit in Afghanistan are now emerging to say they believe Bergdahl deserted before he was captured
* Bergdahl e-mailed his parents saying he “was ashamed to be an American”
* Military seems to acknowledge Bergdahl, 28, could have committed some kind of violation
* However, officials say he likely won’t be punished: “five years is enough”
* Former squad leader said Bergdahl always talked about seeing what was on the other side of the mountains

Innocent Afghans know they will pay when these cut-throats come home.

The release of five Taliban prisoners in exchange for a U.S. soldier has drawn criticism from some Afghans, who say the detainees are dangerous and will rekindle ties with terrorist networks to resume fighting, just as most foreign troops leave. ~ Afghans Say Taliban Prisoners Freed By U.S. Will Rejoin Battle, Jessica Donati and Hamid Shalizi, Reuters

Just one more confirmation, folks: you ‘been had:

And the Army’s about to promote him again:

…the prisoner exchange to bring home American POW Bowe Bergdahl, in exchange for five terror suspects is coming under fire. Despite complaints from fellow soldiers, a senior defense official tells us that Bergdahl has not been classified as a deserter and is still scheduled to be promoted to staff sergeant. ~ Deal to Free Soldier Facing Criticism, CNN (transcript)