Photographs that appear to have been broken either by CBS or press from Europe are being aired which show Iraqi prisoners who were forced by their American captors to make geometric shapes with their bodies while in the nude. 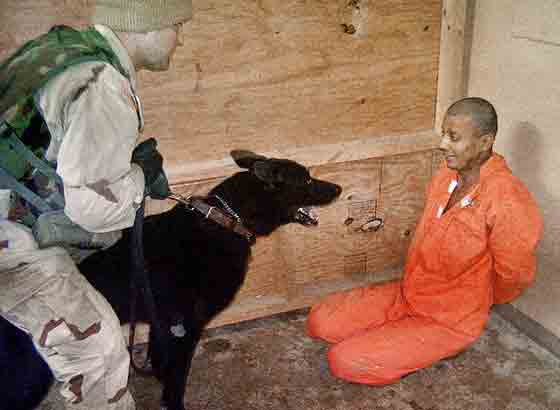 A muslim terrorist is about to regret his cultural degradation of dogs.

An “outrage” that must be immediately addressed with the strictest possible measures?

Were I in command of the individuals that perpetrated what they did I would discipline them immediately and transfer them away from care of prisoners.

But humiliation, in comparison with the torture our soldiers (and civilian Iraqis) have received at the hands of our enemy, is not even a close comparison!

It is next to impossible to wage and win a war (which, by its very nature, is barbaric and despicable) in a culture such as that which exists in America and especially western Europe today. No where else in the world do nations allow those who are openly hostile to them to preach sedition in their towns and cities the way we do.

In England, Muslim “imam” Abu Hamza al-Masri has made statements like—

Bin Laden is a good guy. Everyone likes him in the Muslim world, there is nothing wrong with the man and his beliefs…

If you [Britain] were on the agenda, you would see suicide bombings everywhere like in Israel. It is simple—stay away [from Iraq] and preserve your people…

He is originally from Yemen but he now has citizenship in England—and England has stuck itself with him.

Mohammed Mustafa Kamel was sentenced to three years in prison in Yemen for his involvement in a terrorist bombing campaign, when aged 17. ~ Militant Islam Monitor

He also now lives in England.

Western law sees fit to allow them to continue in their quest, unabated. They should come to the United States where we have turned our First Amendment right to free speech into a monstrosity that includes pornography and treason.

Right up until we self-destruct.

UPDATE: In the days that have passed since this story originally broke, the western media (lead by the American media—including “right-wing” Fox) have run non-stop, mind-numbing coverage. If you haven’t been paying attention, you’d never know that the subjects of this “abuse” were the same barbaric individuals who have maimed and murdered American servicemen, or that they held information that would be key to stopping the next loss of a soldier’s arm, leg or life. That is, in fact, what was going on. Intelligence (apparently lead by the CIA) were trying to interrogate the prisoners using methods that stopped well short of what they could’ve expected at the hands of Saddam Hussein and his ilk—lopping off of hands, connecting car batteries to privates…

If you haven’t been paying attention you would’ve missed the diametrically opposed differences between the western reaction to terrorists being humiliated and the eastern reaction to innocent peoples’ corpses being picked apart, dragged through the streets and hung on a bridge near Fallujah. In fact, there was no eastern reaction.

The truth of the matter is that this latest “outrage” is nothing more than a vehicle for all those who hate the United States—outside or inside this country—by which they can do as much damage as they can. They scream and rant out of their double-tongued mouths for everything from an apology by the president to the resignation of the Secretary of Defense.

Those of us who see clearly know this for what it is. Sadly, we are the tiniest minority. The president of the United States has already apologized to the king of Jordan.

The families of the American contractors who have been murdered and mutilated are still waiting for theirs.