It’s probably a little late to be weighing in on the tsunami that killed some 160,000 people in Asia late last year but I have an opinion I haven’t heard too many pundits express—”What role did the Will of G-d play?”

We Christians know that a lot of important things go on beyond our senses. Daniel recounts a great vision that he prayed and fasted to understand. Eventually, 3 weeks later, an angel came to give Daniel his answer. The angel explained that he was dispatched the first moment Daniel began to pray but something happened—

…he said to me, “Do not be afraid, Daniel, for from the first day that you set your heart on understanding this and on humbling yourself before your G-d, your words were heard, and I have come in response to your words. But the prince of the kingdom of Persia was withstanding me for twenty-one days; then behold, Michael, one of the chief princes, came to help me, for I had been left there with the kings of Persia.” ~ Daniel 10:12-13, NASU

The “prince of Persia” is a demon who has authority over the country of Persia…modern Iran. He held up Daniel’s answer for 3 weeks until G-d called out reinforcements.

The Book of Job begins with a meeting of angels before G-d that satan insinuates himself into in order to accuse Job. This prompts the physical events that turn Job’s life upside down.

Why? Job loved G-d! In some churches there is a teaching known as “Prosperity Doctrine” which states that, with enough faith and enough financial contributions, the Believer will never be sick and always be wealthy. Was Job lacking in faith and giving?

Job was lacking in spiritual maturity—something all Christians lack until it is taught to them. Scripture tells us that those who love Jesus are His “Bride”—His companion (Revelation 19:7)—and that He is the Bridegroom (John 3:29). What would any good father (Father) want for his son? A deserving bride! The best bride Jesus could have is one who has as many of His Traits as possible. No one wants a total opposite as their companion for all Eternity (despite the moronic idiom “opposites attract”).

For those whom He foreknew, He also predestined to become conformed to the Image of His Son… ~ Romans 8:29, NASU

And what does Jesus embody? Selfless, sacrificial love, patience, kindness, generosity, joy, happiness, sympathy and empathy, peace, self-control, gentleness—qualities that do not come natural to mankind. These are traits that take development, almost always through pain and trial—

SO…G-d is sovereign and, although He is not the Author of evil or pain, He does allow it for the sake of teaching.

“I will cut off your carved images
And your sacred pillars from among you,
So that you will no longer bow down
To the work of your hands.
I will root out your Asherim from among you
And destroy your cities.
And I will execute vengeance in anger and wrath
On the nations which have not obeyed.” ~ Micah 5:13-15, NASU

Then the two men (angels) said to Lot, “Whom else have you here (in Sodom)? A son-in-law, and your sons, and your daughters, and whomever you have in the city, bring them out of the place; for we are about to destroy this place, because their outcry has become so great before the L-RD that the L-RD has sent us to destroy it.” ~ Genesis 19:12-13, NASU

This brings us to the tsunami. What were the spiritual factors behind such a terrible occurrence? It doesn’t take long to uncover that the area hardest hit was known for a terrible sex slave trade.

“…child rape, an epidemic in South Africa, is spreading like a wildfire into Southeast Asia. Cambodia’s child sex slave industry is globally famous. In communist Vietnam, over 3,500 child rape cases have appeared in courts since 1998. The Vietnamese government has released figures showing that in some regions of the nation, between half and 90 percent of sexual crimes and abuse occur against minors. Throughout Southeast Asia, it is estimated that some 300,000 women and children are involved in the sex trade.” ~ Sex-Slave Trade Flourishes In Thailand, Anthony C. LoBaido, WorldNetDaily.com 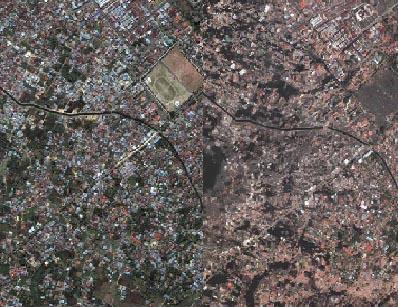 This was the result (left “before”, right “after”)—

Does it take rocket science to imagine the possible factors behind September 11, 2001?

It is with sad disgust that I look upon both instances. The Asians have not learned their lesson. Children are being kidnapped right from the hospitals that are giving them aid from the tsunami.

And perversity continues to reign in the United States of America.