The sign in the window warned burglars that the homeowner owned a handgun and would use it in self-defense. The state agents knocking on the door were there to confiscate the weapon.

The agents are part of the California Department of Justice’s Armed Prohibited Persons System (APPS), a program that takes firearms from people barred from owning them.  The law says that group can include ex-felons and people deemed to be mentally unstable.

Often arriving in SUVs and dressed in black tactical uniforms, the teams regularly sweep through California cities with a list of names and addresses.

It was Fresno’s turn last week.

Thursday night, the agents went to the home near Roeding Park to collect a Smith & Wesson semi-automatic pistol from a woman who had been evaluated under California Welfare and Institutions Code 5150 as a danger to herself and others.  As such, she had been ordered to surrender any firearms in her possession and had not. 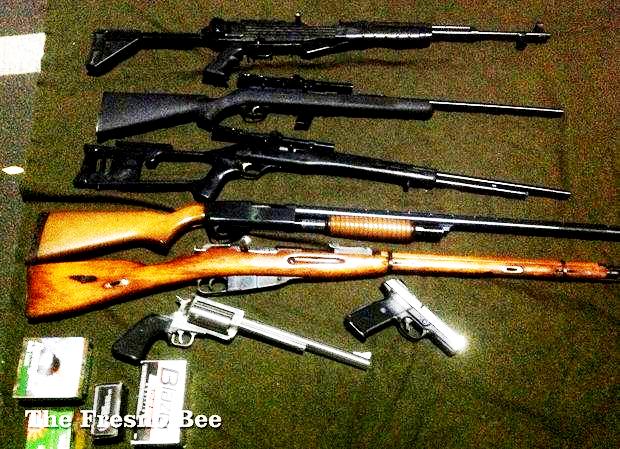 As is often the case, the agents were told that the weapon was not there and the woman’s father-in-law had it in Bakersfield.

But that won’t be the end of the search, according to Kisu Yo, a special agent who was part of the team making the sweep.

“There’s no such thing as safe-keeping (by another family member),” Yo said.

Team members say they are dogged: They will press a prohibited person to allow them to search a home to look for the gun and ask to see the paperwork if they are told a weapon has been sold.

If agents are denied the search but have reason to believe they are being lied to, they will seek a warrant and lock down the house until they get results.

“That can make for a long night,” said Michelle Gregory, a spokeswoman for the Department of Justice.

Long nights are part of the job for the 33 agents who make up the APPS teams. They work evenings and nights because they are more likely to find people at home during those hours. They work in teams because they often have to approach darkened homes where there is likely to be an armed person inside.

“It really is a dangerous job,” said Yo, a Marine Corps veteran of the first Gulf War. “Every time we make a contact, it’s a very dangerous situation.”

Agents also say they are understaffed, but they are likely to get some help soon.

Gov. Jerry Brown recently signed legislation to use a $24 million surplus from funds paid during firearms purchases to hire as many as 36 more agents. (Fresno gun dealer Barry Bauer and several Second Amendment groups are suing because they say the diversion of funds is unconstitutional.)

California is the only state to use a program like APPS, which cross references five databases to find people who legally purchased handguns and registered assault weapons since 1996 with people banned from owning or possessing firearms.

The Attorney General’s Office said that more than 2,000 firearms were seized last year under the program. The Department of Justice says there are about 21,000 prohibited persons who possess about 43,000 firearms in the state.

Gun rights groups such as the National Rifle Association argue that making surprise visits to homes of prohibited persons is a step too far, but agents argue that people who have lost the firearms rights are clearly notified in court paperwork and other documents that they are to turn in their weapons. When they don’t, the agents can make an arrest as well as take the gun.

That was the case for a Clovis man who is prohibited from firearms possession after being convicted of felony DUI and evading officers. When agents went to his home near Swift and Fowler avenues Thursday, they found a Taurus .45 caliber pistol and he was booked as a felon in possession of a firearm.

Arrests don’t always follow the discovery of a gun. Agents visited a nearby home in Clovis in search of a firearm owned by a man who had been evaluated as mentally unstable. They found that he had access to a gun safe with several long guns as well as a long-barreled .50-caliber Smith & Wesson revolver valued at several thousand dollars.

The man told agents that he and his entire family were hunters and that the revolver was used as a weapon of last-resort when facing an attack by a charging wild pig. He said he was devastated to lose his firearm rights. The agents left with the weapons but did not arrest him.

Left behind was a hunting bow.

“You’re not taking my bow and arrows, are you?” the man asked.