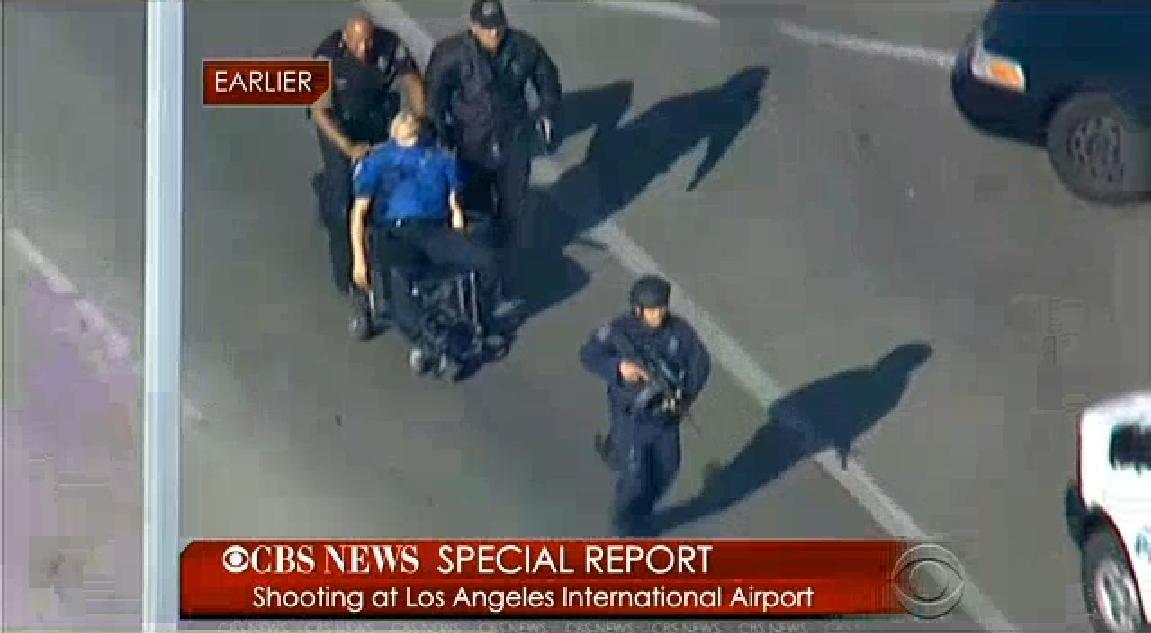 That is the sound of your Bill of Rights (what’s left of it) sliding down the drain of One World Order tyrannical fascism with each new shooting conspicuously timed to show up regularly.

Yes, your own government plotting to act out crimes or even commit them against innocent citizens for political gain is an exotic and sensational accusation.

Sadly, with the people in power from the local level all the way up to Washington, Demonically Controlled, it has become the norm.

There are disturbing indicators that the shooting at LAX was contrived as another wedge to be used to part you from the firearms you would use to defend yourself during martial law and civil war.

When the story first broke, the Daily Caller reported that they had intercepted a memo which stated the shooter was an off-duty TSA agent.

This was later changed to one Paul Ciancia, a supposed anti-government crusader from the freedom-spawning haven of New Jersey. ABC News reported that a note at the scene of the crime gave us this revelation.

As law enforcement officials work to uncover Ciancia’s motivations, a note found at the scene that indicated Ciancia’s anti-government sentiments and suggested that he expected to die in the airport shootout.

The note found at the scene ended with the letters “NWO,” according to law enforcement sources, which is believed to stand for “New World Order.” The note also specifically mentioned anger and frustration targeted toward the TSA.

As I chronicled for you in May after the Boston Bombing, the original intent was to blame a Red Neck Patriot but that fell through.

From the looks of this guy, we clearly have another Jared Lee Loughner, James Holmes or Adam Lanza.

I’ll bet you can’t guess what the weapon was that did the killing. 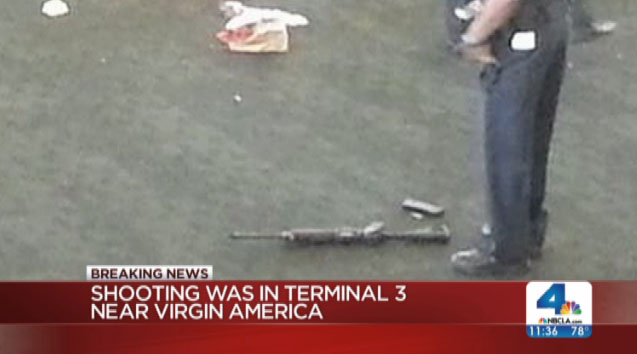 Yep, somehow this crazed Tea Partier, paranoid that the New World Order was coming for him, found a deadly “assault rifle” somewhere in his gun-free paradise of New Jersey, took it to another gun-free paradise—California—and somehow managed to get it inside the tight airport security (where no guns are allowed).

I mean, seriously. Did Barack Obama write this or NBC News? I guess it’s the same thing:

A gunman was armed with “hundreds of rounds” of ammunition when he opened fire at Los Angeles International Airport Friday, killing a security worker and spraying a terminal with bullets as travelers sought cover, authorities said.

“There were more than 100 more rounds that could’ve literally killed everybody in that terminal today,” Mayor Garcetti said at an afternoon news conference, lauding law enforcement’s response that he said saved many lives. …

The “lone gunman” entered the screening area in Terminal 3 and pulled a rifle out of his bag, opening fire before he was taken into custody after an officer-involved shooting, said Patrick Gannon, the chief of police at LAX. …

“He walked to Terminal 3, pulled an assault rifle out of a bag and opened fire in the terminal,” Gannon said. “He went into the screening area, past screeners and continued shooting into the airport itself.”

FBI officials said the agency will “investigate the shooting and the motivation behind it.” A bag used by the gunman to carry his weapon into the terminal was found to contain notes with anti-government sentiments written on them, law enforcement told NBC4. …

The deadly shooting raised questions about security at the nation’s third-busiest airport.

Airport police thought they had improved checkpoint security by moving officers into the lobby ahead of the screening areas, but a troubled 23-year-old allegedly found a weakness, opening fire inside the terminal.

Yeah. You thought you and your beloved family were getting raped before. Just wait until the new and improved security measures show up.

And if you think it’s going to go easy on you, just check out the AP picture of these two TSA agents consoling each other after the shooting. (special thanks to the Huffington Post for displaying that for their target audience)

There is some fascinating video coming out on this.

What’s the first thing you do before getting ready for the big game? Why practice, of course. Running a drill similar to the event is a tell-tale sign that it has been staged. Often drills are used during the event to confuse first responders who aren’t in-the-know so that the government-trained killers can make their escape.

Pay special attention starting at 13 minutes to the “Man in Black” looking dude behind “LAX Police Chief” (the frigging airport has its own Police Chief?!) Patrick Gannon. Watch how he has to take a second to wipe his eyes as if saying, “Dude. Shut your ____ mouth already.”

Did you also notice at 12 minutes in how the reports of “multiple shooters” and someone seen in handcuffs was addressed?

But perhaps the best so far is this from CBS News. Jump to 3 minutes in and tell me if that doesn’t look like a crash test dummy.

On closer examination I could go either way but that is not the tactical procedure for evacuating a casualty.

Looks real good for the cameras, though—especially when they cut off before you can see what happens to the subject and/or get a closer look.

One thing is for sure… we’re all expendable dummies now.

Some of my brethren on Before It’s News are remarking that there are some abnormalities with the names involved. A witness questioned by the FBI is one “Joshua Pagan” and a breakdown of the suspect’s last name can spell out “CIA‘n’CIA”.

I never make light of the possible satanic motivations, machinations and perverse humors of the Luciferians running this country so I thought I’d share it with you.

Another indicator has come to my attention.

In January of this year, the Washington Times ran this report:

Homeland Security Training TSA Workers To Save Themselves In Shooting

Transportation Security Administration (TSA) checkpoint screeners are receiving training to prepare them for the possibility of a mass shooting at one of the agency’s airport checkpoints, and those TSA personnel are being instructed to “save themselves” should a shooting occur. …

The TSA screener, who claims to have recently undergone agency training during which TSA personnel were confronted with a chilling checkpoint shooting scenario, now tries to remain aware of how to get out alive were such a shooting to unfold.

“Every day when I arrive for work, I look for an escape route in case someone opens fire,” said the TSA worker. “We have been told to save ourselves.”

Does the TSA already have intelligence about a possible future checkpoint shooting?

This can be likened to the visit Attorney General Eric Holder had with Connecticut governor Dan Malloy to discuss “gun control”…just two weeks before Sandy Hook.

—Or the Homeland Security emergency response drill that took place in 2010 in sleepy little Sandy Hook, itself.

Talk show host, author and pastor Carl Gallups announced on his radio program that he has an insider source who confirmed that the shooting at LAX was a “false flag” whose purpose was to attack the 2nd Amendment.

When I first saw this pic unattached to the original story I thought for sure it was somebody being stupid, maybe even intentional disinformation.

And then I found the original NY Post link and realized, it’s us whom they think are stupid.

This is supposedly Paul Ciancia after being shot by police. It’s highly questionable if the subject is even a real person, judging by the contorted position, anorexic build and blank stare of a perpetrator who was supposedly taken into custody.

What is on the floor next to the subject is anybody’s guess.

One thing it isn’t, is human blood. 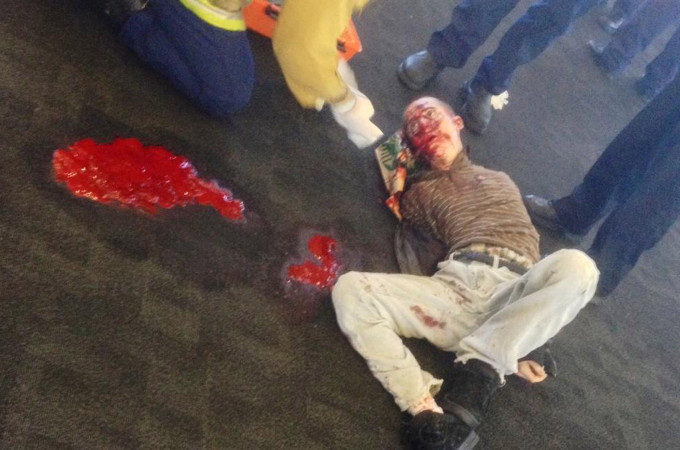 This is interesting. The supposed victim of the supposed shooter is related to the land of Make Believe.

This, too, can be connected to the queer goings on in Connecticut where the prop master for Dark Knight Rises and other big budget movies, Scott Getzinger, died in a car accident.

The Dark Knight Rises, you may recall, was the film playing at the theater in Aurora, Colorado during the mass shooting supposedly enacted by James Holmes.

One of the props from Dark Knight Rises were maps of Gotham City where a southern peninsula noted from previous maps was renamed “Sandy Hook”.

If a terror event has been engineered, you need the patsy to be dead as a result (or soon after, like Lee Harvey Oswald), incapacitated or unable to speak. At the Boston Marathon bombing we saw both; Tamerlan Tsarnaev was gunned down and run over and his brother Dzhokhar was given a horrible wound to the throat when captured alive after the amazing marksmanship of his pursuers failed to kill him despite riddling his hiding place with rounds.

Ciancia, 23, was hauled away moments later on a stretcher and later heavily sedated for medical reasons, but not before he told investigators he had acted alone when he opened fire in the terminal, a law enforcement official who has been briefed on the investigation told The Associated Press on Sunday. …

Ciancia was under 24-hour armed guard at the hospital Sunday after being shot four times, the official said. He was sedated for medical reasons, the official said, adding that one gunshot to the mouth blew a molar out of his jaw.

Interesting how someone could be so filled with hate as to murder an innocent person yet so helpful to authorities right after the murder.