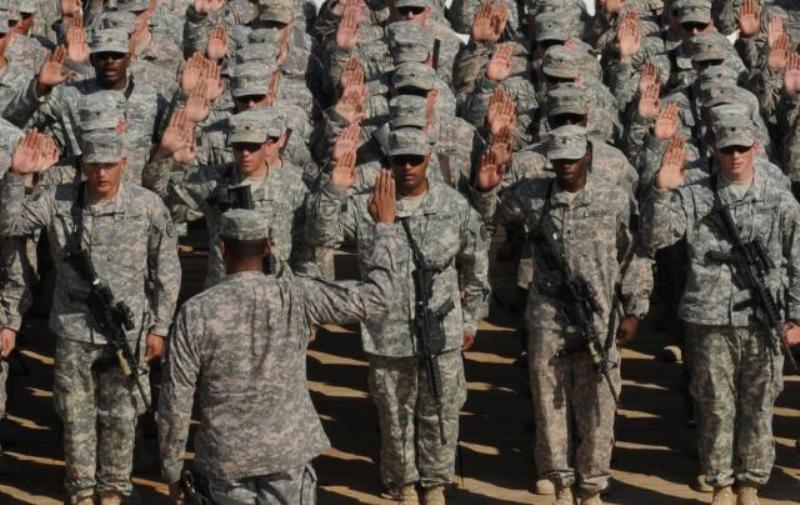 “I, _____, do solemnly swear (or affirm) that I will support and defend the Constitution of the United States against all enemies, foreign and domestic…”

Several times I have been given the honor of re-enlisting a great young soldier and leading them in the Oath of Enlistment. If only we had men of honor and courage who would “declare war” on those who so obviously hate this country.

Case in point: the stalwart guardians of freedom at Newsweek who wrote an article about interrogators at Guantanamo Bay who supposedly defiled a “Qu’ran” and may have flushed one down the toilet. It sparked rioting all throughout the muslim enclaves around the world. The worst seemed to be in Afghanistan where 14 died over 3 days of rioting. It would seem that not enough American blood had been spilled or American money had been spent freeing the good people of Afghanistan from the likes of the Taliban and other nice people. It’s totally understandable that they would immediately spew out such winners as “Death to America” while they ran amuck through the streets.

An even greater winner is Michael Isikoff and Newsweek—those hound-dogs of righteousness hunted down what could be the Pulitzer Prize-winning story of the year: while interrogating Muslim thugs and cockroaches at Gitmo, a Qu’ran may have got Deep-Sixed. What an outrage! It runs right up there with cutting off an innocent man’s head because he’s a non-muslim in the wrong place at the wrong time.

—Or with the muslims who are raping, torturing and enslaving Christian children in Sudan. —Or the story of Rev. Nguyen Hong Quang and evangelist Pham Ngoc Thach who have been imprisoned by the government of Viet Nam for the high crime of being Christians. With all of the coverage Newsweek gives to stories like those, it’s only right that they run a little blurb about Taliban-tomes-turned-toilet-paper. Heck, it was only a little blurb, right? What harm could it do?

Although the original report in Newsweek was small, it was re-broadcast by television networks such as al-Jazeera and al-Arabiya… ~ Newsweek Sparks Global Riots With One Paragraph On Koran, Catherine Philp, Times Online

Al-Jazeera. The same nice guys who the cockroaches send beheading videos to—and play them immediately. But Heaven forbid we should put them out of business! That would attack the sacred alter of “free press/free speech”!

For those who do think interrogators went over the top flushing some famous foreign folklore, never fear, Condi is here!—

As Washington scrambled to calm the outrage, Condoleezza Rice, the US Secretary of State, promised an inquiry and punishment for any proven offenders. ~ Newsweek Sparks Global Riots With One Paragraph On Koran, Catherine Philp, Times Online

Oh, by the way, the little blurb had about as much credentials as Dan Rather at a George Bush birthday party:

UPDATE (Tuesday, May 17, 2005): I’m struck by the stark contrast between Islam and Christianity.

First, it’s obvious that what has and is taking place in response to this “outrage,” goes far deeper than just a non-incident at Guantanamo Bay. Terrorist leaders are undoubtedly using this lie. However, what Newsweek did was certainly the match that lit the powderkeg.

If Christians rioted every time Hollywood (movies & TV), the education establishment, the media and the government blasphemed our Savior and our Scriptures the entire nation would be a smoldering ruins.

And of course, muslims have a STELLAR record when it comes to religious tolerance—

After being nailed to a board by his master and left for dead – the last in a series of torturous acts – a Sudanese Dinka boy escaped from his bondage and lived to tell his horrific story.

…since the 1980s, the Muslim National Islamic Front government has sanctioned the taking of Christians and animists from the south part of the nation to be sold to Muslims as slaves in the north. The two sides have been engaged in a civil war for several years.

“During his enslavement,” Phillips wrote, “he was often beaten, tortured and abused by his Arab master. African slaves, especially Christians, are viewed as lower than animals.

“Joseph was raised Christian. His desire to worship was mocked by his master, who told him every day for 10 years that he had no business worshipping since he was of no more value than a donkey.” ~ Sudan Slave Crucified by Master, WorldNetDaily.com

JERUSALEM – With Muslims worldwide protesting a now-retracted Newsweek report that claimed U.S. Army interrogators at Guantanamo Bay had flushed a Qu’ran down the toilet, the father of a rabbi who was murdered while trying to defend a Jewish holy site from Palestinian rioters blasted Muslim leaders yesterday in an exclusive WorldNetDaily interview.

Rabbi Zevulun Lieberman, whose son Hillel died trying to save Joseph’s Tomb in the West Bank city of Nablus from Muslim rioters, told WND he is “sickened by this Muslim outcry when Muslims have shown the world they don’t have any respect for religion whatsoever. They lost the right to protest about disrespect for religion and holy objects a long time ago.” ~ Muslim Double Standard on Religious Desecration, WorldNetDaily.com

NOW, take into effect just who is IN Gitmo—murderers. They don’t wear a uniform. They attack in the most cowardly ways possible and have no problem maiming women and children indiscriminately. And yet, muslims around the world consider these animals “kindred” whose quality of life is of the utmost importance. What that says is that ALL muslims agree with the depraved tactics the murders use. When was the last time you heard a muslim outcry over a suicide bombing?? This again proves that ISLAM is the problem.

Finally, like MORONS the United States continues to placate CRIMINALS we are trying to get information from that may save American lives:

More than two years ago, the Pentagon issued detailed rules for handling the Koran at Guantanamo Bay, Cuba, requiring U.S. personnel to ensure that the holy book is not placed in “offensive areas such as the floor, near the toilet or sink, near the feet, or dirty/wet areas.”

The three-page memorandum, dated Jan. 19, 2003, says that only Muslim chaplains and Muslim interpreters can handle the holy book, and only after putting on clean gloves in full view of detainees.

The detailed rules require U.S. Muslim personnel to use both hands when touching the Koran to signal “respect and reverence,” and specify that the right hand be the primary one used to manipulate any part of the book “due to cultural associations with the left hand.” The Koran should be treated like a “fragile piece of delicate art,” it says. ~ U.S. Long Had Memo on Handling of Koran, Robin Wright, Washington Post Staff Writer

Are the individuals that we have incarcerated “muslims” or MURDERERS?! Who gives a RAT’S ASS whether they’re offended or not?! To quote radio talkshow host Glenn Beck (on the program airing today), “If it would’ve made them talk, I’d give Muhammad himself a whirl.” Again, this proves the point that ISLAM is the problem. Where is the outcry from the muslim community? The silence is deafening.

Now, before anyone does something stupid and blames it on my web site, let me make it clear that I AM NOT ADVOCATING RANDOM VIOLENCE AGAINST MUSLIMS. I am advocating distrust of all muslims (ESPECIALLY those in uniform) and a concerted effort at winning them to Christ.

Oh, by the way. Don’t strain too hard to see this story talked about in the “mainstream” press anymore.

Anybody remember the records set for reporting on “Abu Graib”…???