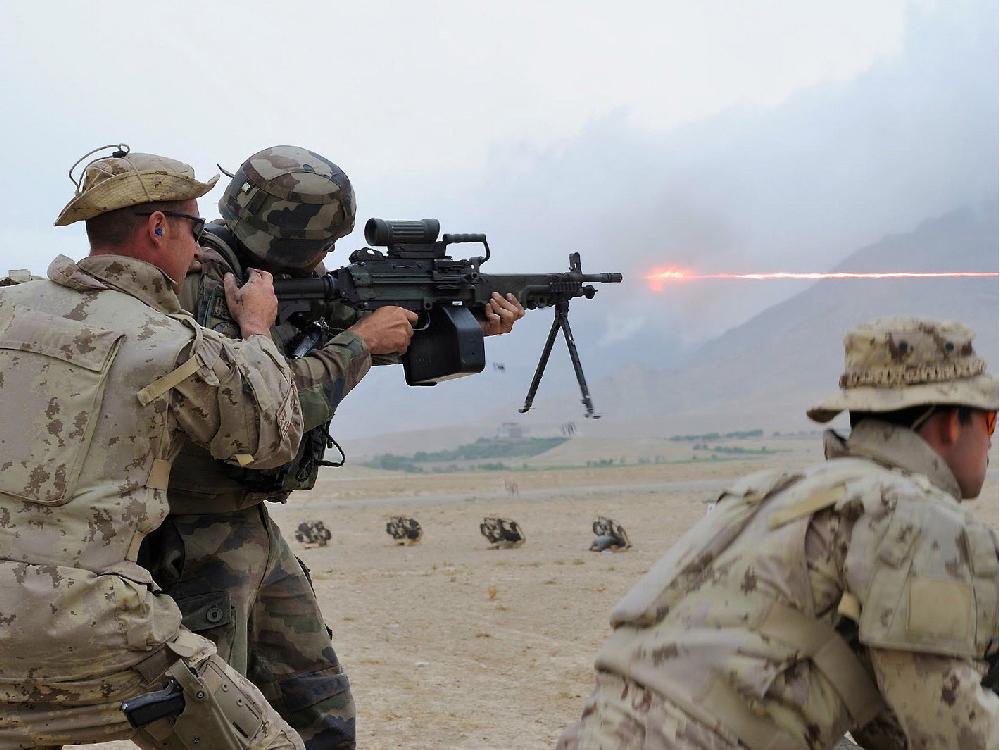 Am I the only one getting concerned about the level of training our expert military is pouring into Iraq and Afghanistan? One need only go to the most radical Leftist radio show, TV program or internet site to be reminded of how America played a role in empowering bin Laden—

The 1979 Soviet invasion of Afghanistan galvanized bin Laden. He supported the Afghan resistance, which became a jihad, or holy war. Ironically, the U.S. became a major supporter of the Afghan resistance, or mujahideen, working with Saudi Arabia and Pakistan to set up Islamic schools in Pakistan for Afghan refugees. These schools later evolved into virtual training centers for Islamic radicals.

By the mid-1980s, bin Laden had moved to Afghanistan, where he established an organization, Maktab al-Khidimat (MAK), to recruit Islamic soldiers from around the world who later form the basis of an international network. The MAK maintained recruiting offices in Detroit and Brooklyn in the 1980s. ~ Who Is Osama bin Laden?, David Johnson, infoplease.com 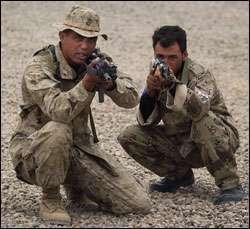 US soldiers now fighting the remnants of Saddam’s regime can look back to the early 1980s for the start of a relationship that fostered the rise of the largest military in the Middle East…Reagan, determined to check arch-foe Iran, opened a back door to Iraq through which flowed US intelligence and hundreds of millions of dollars in loan guarantees…It was complemented by French weaponry and German dual-use technology that experts say wound up in Iraq’s chemical and biological warfare programs.

Donald Rumsfeld, then Reagan’s special Middle East envoy, is credited with establishing the back channel to Saddam on a secret trip to Baghdad in December 1983.

Washington had plenty of motives to help Saddam stave off an Iranian victory. Not only was the United States still smarting from the 1980 hostage-taking at the US embassy in Tehran, but its embassy and a marine barracks in Beirut had been struck with truck bombings earlier in 1983. ~ Reagan Played Decisive Role in Saddam Hussein’s Survival in Iran-Iraq War, Agence France Presse, June 9, 2004

Now, I’m not second-guessing what the State Department did in an effort to throw the Soviet Union out of Afghanistan and keep Iran at bay, but certainly some increased introspection was due in both cases with particular focus on RELIGION and HISTORY, specifically in how Islam has never been warm towards the US.

Of particular concern is how a “military consultant” gushed recently on Fox News that Iraqi Special Forces are “particularly good.” There are other special forces units that were trained by the U.S. military who are putting their skills to new uses—

Elite Mexican commandos, trained by U.S. forces to combat the drug cartels have switched sides and are working for the drug smugglers in the border area posing a special hazard to American law enforcement and Border Patrol agents, according to a U.S. Justice Department memo.

The commandos, trained by the U.S. Army at Fort Benning, Ga., are known as “Los Zetas.” Los Zetas are known to be extremely violent and have been blamed for an outbreak of violence along the Mexican border.

There are reports of the commandos making cross-border runs into U.S. territory in military-style vehicles, armed with automatic weapons. ~ Mexican Commandos New Threat On Border, WorldNetDaily

It would appear that we have again contributed to the empowerment of those who hate us. In fact, one could make an excellent case for the illegal immigration from Mexico as being very much a “war.”

It’s bad enough when unwitting politicians and bureaucrats make these decisions through a lapse in judgment—but it’s unconscionable when done purposefully: 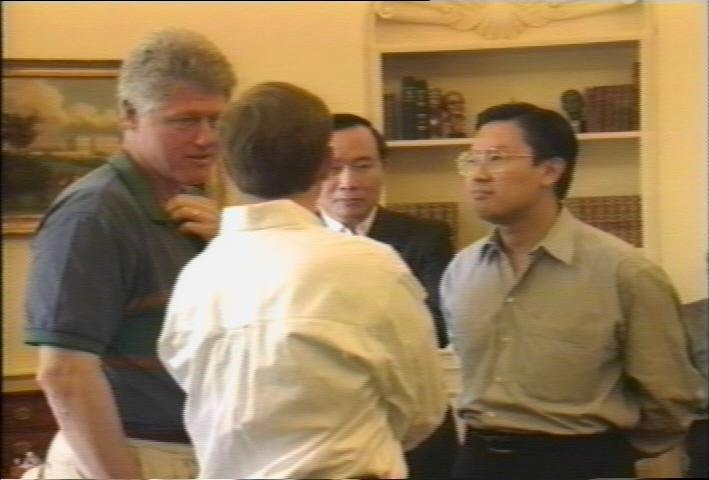 The Chinese connection exploded with the arrival of the Clinton administration. A younger crowd of American politicians had skipped the part about patriotism, about the pledge of allegiance, about loyalty not only to country but to much of anything other than themselves. The Clinton policy toward China was merely an extension of these values: What’s in for us and how soon? The notion of national security was almost alien to them; besides, they had the new paradigm of globalization to keep them warm. Here are just a few of the things that happened along the way:

—Political insiders interested only in doing whatever it takes to stay in power? —Statesmen without sense to look forward or backward in time? —Super-secret group responsible for insuring the future of the “military/industrial complex”…or just plain morons? Take your pick. The bottom line is, it would seem that we are the ones who make (or allow) our own trouble.

Oh yeah…would you like to ask Ron Brown about all these strange affairs of his (and possibly connect them to William Jefferson Clinton)? Well you can’t because he died in a “freak” plane crash. ‘Guess there wasn’t time for him to commit suicide.

UPDATE: It seems that there is yet ANOTHER issue of treason and affront left behind by the Clinton administration.

During his scandal-ridden tenure, Bill “I loath the military” Clinton decided to exercise the military he did his best to destroy through budget cuts and a radical-left agenda of forcibly-integrating homosexuals and women by sending them to the quagmire that was Yugoslavia.

Since then, it has come to light that Clinton relied heavily upon jihadists he had transplanted from Afghanistan and elsewhere, then trained and equipped them, further sowing the seeds for the chaos we are reaping today:

From 1992 to 1995, the Pentagon assisted with the movement of thousands of mujahedin and other Islamic elements from Central Asia into Europe, to fight alongside Bosnian Muslims against the Serbs.

The Bosnia venture appears to have been very important to the rise of mujahedin forces, to the emergence of today’s cross-border Islamic terrorists who think nothing of moving from state to state in the search of outlets for their jihadist mission.

As part of the Dutch government’s inquiry into the Srebrenica massacre of July 1995, Professor Cees Wiebes of Amsterdam University compiled a report entitled “Intelligence and the War in Bosnia”, published in April 2002. In it he details the secret alliance between the Pentagon and radical Islamic groups from the Middle East, and their efforts to assist Bosnia’s Muslims. By 1993, there was a vast amount of weapons-smuggling through Croatia to the Muslims, organized by “clandestine agencies” of the USA, Turkey and Iran, in association with a range of Islamic groups that included Afghan mujahedin and the pro-Iranian Hezbollah. Arms bought by Iran and Turkey with the financial backing of Saudi Arabia were airlifted from the Middle East to Bosnia—airlifts with which, Wiebes points out, the USA was “very closely involved”.

Under the terms of the 1995 Dayton peace accord, the foreign mujahedin units were required to disband and leave the Balkans. Yet in 2000, the State Department raised concerns about the “hundreds of foreign Islamic extremists” who became Bosnian citizens after fighting against the Serbs, and who pose a potential terror threat to Europe and the United States. US officials claimed that one of bin Laden’s top lieutenants had sent operatives to Bosnia, and that during the 1990s Bosnia had served as a “staging area and safe haven” for al-Qa’eda and others.

Indeed, for all the Clinton officials’ concern about Islamic extremists in the Balkans, they continued to allow the growth and movement of mujahedin forces in Europe through the 1990s. In the late 1990s, in the run-up to Clinton’s and Blair’s Kosovo war of 1999, the USA backed the Kosovo Liberation Army against Serbia. According to a report in the Jerusalem Post in 1998, KLA members, like the Bosnian Muslims before them, had been “provided with financial and military support from Islamic countries”, and had been “bolstered by hundreds of Iranian fighters or mujahedin…[some of whom] were trained in Osama bin Laden’s terrorist camps in Afghanistan”.

Why is this aspect of the mujahedin’s development so often overlooked?

It would appear that when it comes to Bosnia, many in the West have a moral blind spot. For some commentators, particularly liberal ones, Western intervention in Bosnia was a Good Thing…Many journalists and writers demanded intervention in Bosnia and Western support for the Muslims. In many ways, this was their war, where they played an active role in encouraging further intervention to enforce “peace” among the former Yugoslavia’s warring factions. Consequently, they often overlook the downside to this intervention and its divisive impact on the Balkans.

…a cool analysis of today’s disparate Islamic terror groups, created in Afghanistan and emboldened by the Bosnian experience, would do much to shed some light on precisely the dangers of such intervention. ~ How We Trained al-Qa’eda by Brendan O’Neill (The Spectator 9/12/03)

I don’t know what’s more disgusting: the depth of depravity Clinton used to defile this nation for 8 long years, or the fact that he was voted into office and is still popular at this writing.