“Homeland Security” does not sound American, it sounds like something from an autocratic tyranny and that’s appropriate.  Doubtless the Department’s true creators knew and intended that.

The implication from the George Bush Presidency Number 431, 2 was that, due to the “terror attacks” of September 11th, 2001, yet another monstrous secret security bureaucracy was needed in the United States.

One would think that mass firings and prosecutions would be necessary given the abrogated responsibilities of the government to keep the citizenry safe from a backwaters jihadist working out of a cave on a kidney dialysis machine but, strangely, just more bureaucracy was installed.

Perhaps a quick look at the “official story” can bring some of these absurdities home…land.

Something James Corbett didn’t think was important to stress, then or since then, is how Vietnamese Roman Catholic Viet D. Dinh had the inversely-termed “Patriot Act” ready to go when Congress clamored for Police State legislation.

Dinh has taught “law” at Jesuit Georgetown University and been handsomely rewarded for his work with a large salary from the Murdochs at Fox.  He has also been the “United States Assistant Attorney General for the Office of Legal Policy”; just one of a myriad of Catholics installed by “Evangelical” President Donald Trump with his overt and covert Jesuit education.3

The Secretaries of “Homeland Security” are very illustrative of the real power behind the fraud of “elected” United States government.

> 2. Next was Michael Chertoff.  Chertoff is from a long line of Jewish Rabbis but his wife Meryl also teaches at Georgetown Law.  Chertoff clerked for William J. Brennan, the Roman Catholic Supreme Court Justice6 who dictated that Americans will provide education to illegal aliens and that any illegal alien woman who manages to cross the open border while pregnant births out an American citizen.

Chertoff was brought in as an assistant U.S. Attorney in Manhattan by then-U.S. Attorney Rudolph Giuliani.  Giuliani gave Chertoff faux crime-fighting face with their theater of “cracking down on the Mafia”.  Giuliani knows all about theater, the twice Christian Brothers-educated Roman Catholic likes to appear in public wearing women’s clothing.  Donald Trump must’ve approved, not only was he involved, he hired Giuliani as his lawyer while President.

By helping to cover up the systemic and ritual rape of soldier’s children at West Point, Giuliani showed he could be trusted to manage New York City on 9/11.

It’s telling that one of Jewish Michael Chertoff’s most cherished memories is being taken deep into the Vatican catacombs to gaze upon the remains of Pope Saint John Paul II.

Both Tom Ridge and Michael Chertoff have cashed in big from their time “safe-guarding American lives”.

> 3. After Leftist Republican Catholic Tom Ridge and Catholic-admiring Jewish Michael Chertoff comes the Jesuit-trained Governor of Arizona, Janet Napolitano.  You might ask, “What does being Governor of a wide-open border State give a woman who has spent her entire life unmarried and without children in experience to keep America safe from another 9/11?”  If you’re going to be that rude you might as well say, “What does a Governor and Secretary of Homeland Security know about running a University (and getting paid three quarters of a million dollars annually to do so)?

One thing Napolitano could be counted on as a female Governor who remained unmarried and without children was to repeatedly veto any chance the unborn had of escaping the abortionists’ implements of slaughter.

To Jesuit-trained Janet, the most dangerous threat America faced was “Right-wing extremism”.  It was a curious agenda for “see something, say something” Napolitano given that she was hiring jihadist fund-raisers to work for her in “protecting Americans”.

Napolitano left both Homeland Security and the University of California under less-than stellar circumstances.

Johnson’s mother, Norma Edelin, worked for Planned Parenthood which is rather insidious given that Roman Catholic Margaret Sanger saw minorities as less-than-human.  Perhaps with that secret told, it’s no surprise that the abortion clinics are centered in minority neighborhoods.

In the United States, the abortion rate for black women is almost five times that for white women. ~ Guttmacher Institute

Although Johnson’s grandfather was named after Catholic-condemning orator Charles Spurgeon, he sent Johnson’s father to St. Vincent de Paul Catholic School Nashville, Tennessee, despite the fact that it was segregated.

The effect of a vaunted “Catholic education” can not be underestimated, especially upon minorities.  The Protestant parents of Georgia Congresswoman Cynthia McKinney (a Leftist Democrat) sent her Roman Catholic St. Joseph’s High School in Atlanta.  She was so effected by the nuns there she considered becoming one herself.  She’s been a dedicated and devout Catholic ever since.

Rather appropriately, Johnson was born on September 11th, 1957.  The Jesuit puppet-masters consider circumstances like that of deep kabbalistic humor.

For instance, in time for the racial unrest caused by what appeared to be a brutal execution of black suspect George Floyd by white Minneapolis, Minnesota police officer Derek Chauvin, the far-Left Democrat Catholic Mayor of Philadelphia7, James Francis8 Kenney9, brought in a black female rather appropriately named Danielle Outlaw.

Apparently, for Mayor Kenney, there were no men in the Philadelphia Police Department qualified to lead, he needed an “Outlaw” from out-of-state.

Her first priority when arriving in Philadelphia was to broaden the regulations governing the different shades of nail polish female “officers” can wear.  She later remarked that, as the black Police Chief looked down upon her black nail polish, her subordinate female officers couldn’t do the same and that had to change!

Another high priority was to promote a “transgender” Philadelphia cop to Police Captain.

Perhaps more important to Mayors like James Francis Kenney (and those who actually make the decisions for Kenney and other “elected officials”) was Danielle Outlaw’s education: private, all-girls Holy Names High School in Oakland, California and then Jesuit University of San Francisco.

As I and my team have remarked very often, the benefit of bringing a power-wielding official in from “out-of-town” is that they will have little or no regard for the native population.  Therefore, doing harm against that population comes more easily.

Fueling this concern further is the fact that Outlaw forswore her public swearing-in ceremony.  Philadelphians were told they should trust it actually happened.  Look, there’s even a picture of the private event (which means it certainly must have occurred with the full responsibilities observed!).  You can almost see Chief Outlaw holding up her hand. 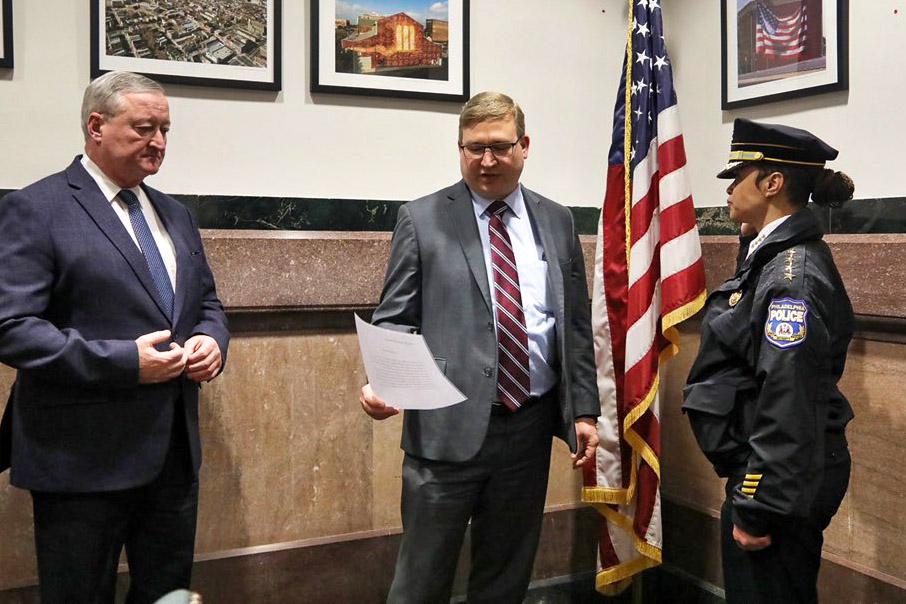 Oath games are not new to Rome or her agents and assets.  It’s fascinating that such things would be taken so seriously, and just as seriously wormed out of!

Former CIA Director John Owen Brennan has enough innocent blood on his hands to make Amon Goeth shudder.  He isn’t called “the Drone Executioner” for nothing.  Any wedding was fair game because the “aim” was to perpetuate the “Global War on Terror”, not end it.  He was Barack Obama’s Kill List Priest.14

Brennan, trained by the Jesuits at Fordham as Donald Trump was, received his consecration as Director of the CIA—not by (secretly Catholic) then-President Barack Obama—but by his openly Catholic far-Left Vice President (today’s sitting President), Joe Biden on a Constitution minus the Bill of Rights. 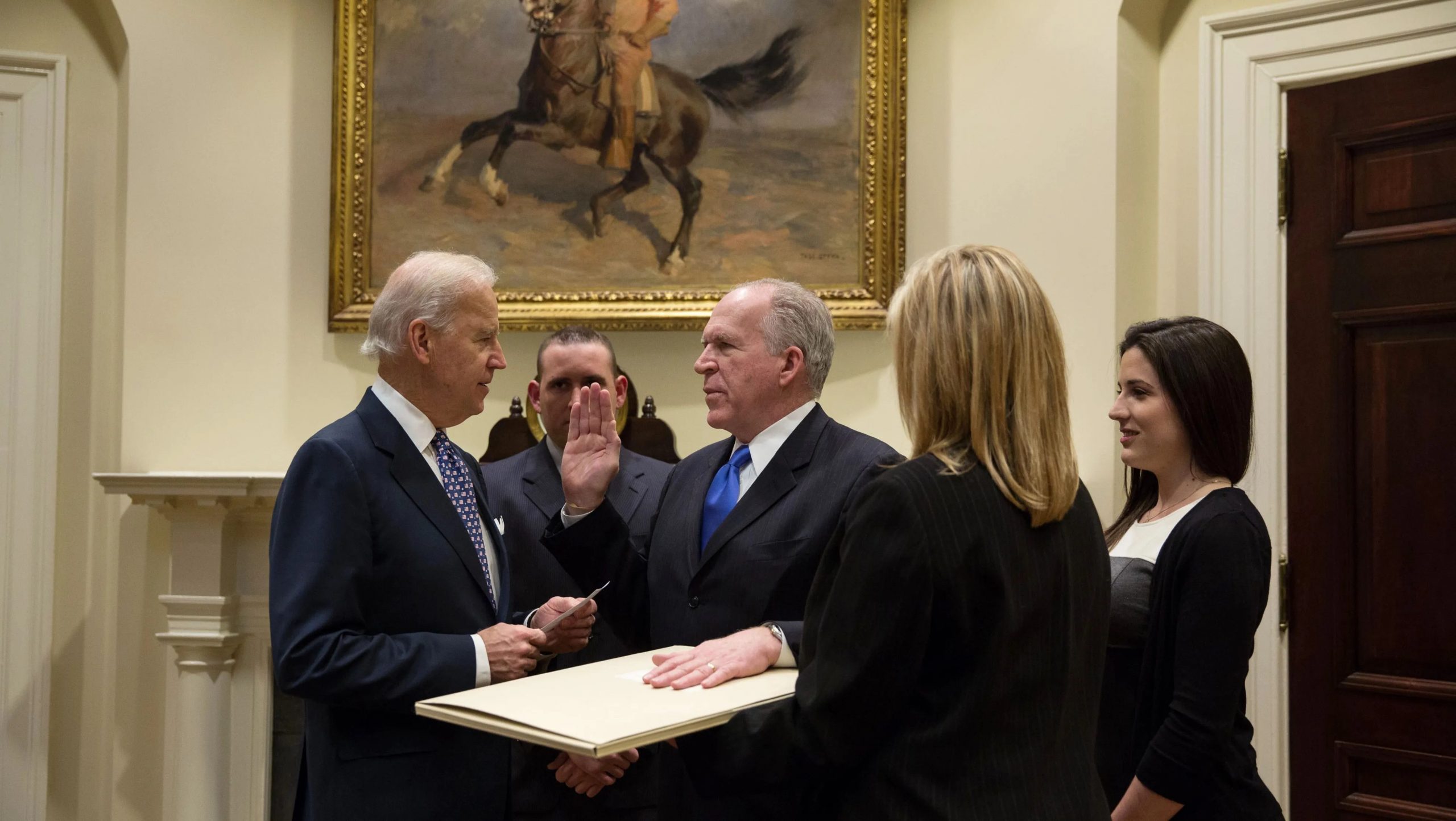 > 5. After Jeh Johnson, Donald Trump appointed ex-Marine Corps General John Francis Kelly.  Kelly is the son of an Irish father and an Italian mother but what they both had in common is devout Roman Catholicism.  It’s unusual for a career military man to avail himself of a civilian education but going to the Father Edmund Walsh School of Foreign Service at Georgetown is a must for advancement in “secular”, “Protestant” America.15

> 6. After Irish/Italian Roman Catholic John Francis Kelly, Donald Trump installed16 Kirstjen Nielsen.  Nielsen was not too proud of her Dutch / German ancestry to avail herself of that Georgetown bump.  A Leftist Catholic classmate was picked up by “secular” media everywhere lamenting that their time honoring the communism of Aquinas hadn’t made Nielsen more sensitive to the needs of millions of Roman Catholic illegal aliens.

“I have known Kirstjen Nielsen for nearly 30 years — since we were both incoming freshman at Georgetown University’s Walsh School of Foreign Service, or SFS, in Washington.  The program is considered to be a training ground for the diplomats, policymakers and global business leaders of tomorrow.  As the school’s website says, ‘SFS undergraduates enter a prestigious program with a legacy of academic excellence combined with a devotion to humanitarian service.’” …

“At Georgetown, Nielsen and I sat in many of the same classes, including the de rigueur freshman theology class — taught by a Jesuit priest — in which we read the works of Catholic luminaries such as St. Thomas Aquinas, the medieval Italian theologian, who taught that ‘good is to be done and pursued and evil avoided … for the common good.’”

The only thing more disturbing than the existence of the “Department of Homeland Security” is the lock held upon its power by a malignant, ancient and sovereign foreign power: Rome.