In all the tales of wartime courage peppering John McCain’s presidential campaign trail, perhaps the most outstanding example of selfless heroism involves not the candidate but a humble Vietnamese peasant.

On October 26, 1967, Mai Van On ran from the safety of a bomb shelter at the height of an air raid and swam out into the lake where Lieutenant Commander McCain was drowning, tangled in his parachute cord after ejecting when his Skyhawk bomber was hit by a missile.

In an extraordinary act of compassion at a time when Vietnamese citizens were being killed by US aerial bombardments, he pulled a barely conscious McCain to the lake surface and, with the help of a neighbour, dragged him towards the shore.

And when a furious mob at the water’s edge began to beat and stab the captured pilot, Mr. On drove them back. 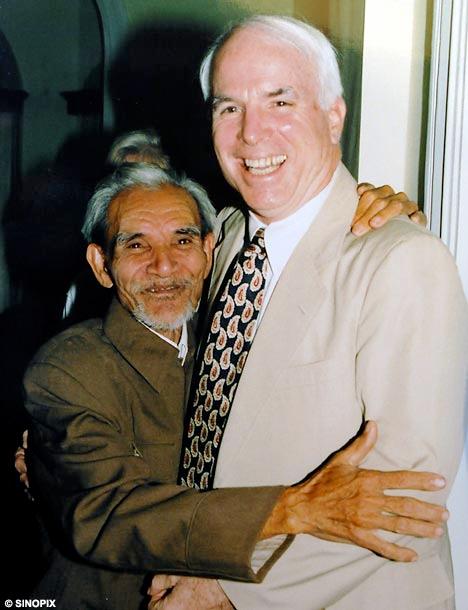 Nearly three decades later, a Vietnamese government commission confirmed he was indeed the rescuer and, in a 1996 meeting in Hanoi, McCain embraced and thanked Mr. On and presented him with a Senate memento.

From that brief encounter to his death at the age of 88 two years ago, Mr. On never heard from the senator again, and three years after their meeting, McCain published an autobiography that makes no mention of his apparent debt to Mr. On.

It is a snub Mr. On took to his death.

His widow, Bui Thi Lien, 71, said: “In his last years, my husband was very sad sometimes.

He would say, ‘Mr. McCain has forgotten me.’

“Mr. McCain would be dead if it weren’t for my husband. He would never have returned to his family and he wouldn’t be in the presidential race today.”

Last week on a visit to Britain to meet Gordon Brown, McCain paid tribute to the role played by British troops in Iraq and Afghanistan – comments that carried extra weight in the light of McCain’s own wartime exploits.

In his 1999 autobiography, Faith Of My Fathers, which laid the ground for his first, unsuccessful run for president in 2000, McCain wrote a Boy’s Own-style narrative of his rescue: “When I came to, I was being hauled ashore on two bamboo poles. 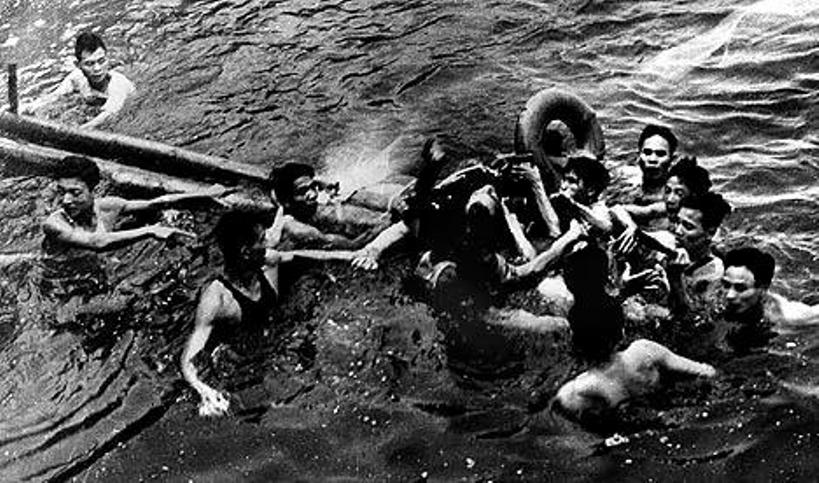 To the rescue: John McCain, lying on his back across a bamboo log, is saved by villagers – including Mai Van On – after his jet was shot down in 1967.

“A crowd of several hundred Vietnamese gathered around me as I lay dazed before them, shouting wildly at me, stripping my clothes off, spitting on me, kicking and striking me repeatedly.”

What followed, according to McCain, was five-and-a-half years of torture and brutal beatings as a prisoner of war – an account that has given a steely edge to his candidacy by establishing him as a true American war hero.

But the story is at odds with the version uncovered by Vietnam veteran Chuck Searcy, who lives in Hanoi and is in charge of the Vietnam Veteran Memorial Fund.

“‘It said, ‘I am the guy who pulled you out of the lake and I have followed your progress over the years. I wish the best for you and your family and I hope some day you will be president of the United States.’

“I thought it was endearing. I sent the letter to McCain’s office and I got back a sniffy response from some assistant saying, ‘Mr. McCain isn’t interested in these fanciful stories.’“ 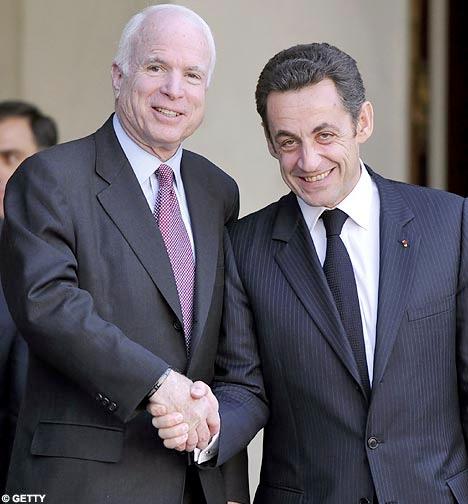 Indeed, claiming to have saved McCain had by then become something of a cottage industry in Hanoi.

Searcy, 63, recalled: “There had been a lot of preposterous claims, but I asked the neighbours around the lake if it was true and they said that was exactly how it happened.”

The story was also confirmed by the Vietnamese government.

Later in 1995, Searcy met McCain at a veterans’ reunion in Washington.

McCain, then a senator closely involved in rebuilding US-Vietnam relations, visited Hanoi in 1996, and a meeting was arranged with Searcy and Mr. On.

Searcy said: “Mr. On was a wiry little guy. He looked as if he had only ever shaved once or twice and he had his old uniform on.

“He raced up to McCain and kept repeating his name as he embraced him.”

Then, through an interpreter, Mr. On recounted the events of that day as McCain listened.

“He launched into a very emotional description,” said Searcy.

“Suddenly they saw this parachute coming down into their small lake.

“Everybody was afraid because they knew it was an American pilot and they didn’t know what to do.

“He said he just instinctively grabbed this big bamboo log and threw it into the water and jumped in after it.

“One of his neighbours joined him and the two of them swam out to the parachute.

“Apparently McCain had broken both arms and one leg, and had sunk to the bottom, but they pulled him out of the lake.

“When they got to the bank, a couple of men attacked McCain, breaking his shoulder with a rifle butt and stabbing his leg, before Mr. On stopped them.

“That day, he saved McCain from drowning and then from maybe being killed by the mob.

“McCain listened but there was no dramatic response. He just nodded, said, ‘Thank you very much,’ and gave Mr. On a little Senate seal.

“It was the kind of thing you buy in the souvenir shop in the Senate basement.

“But Mr. On, to the day he died, treated it as if it were a Congressional Medal of Honour.”

But although McCain appeared to believe the story, it was one he would later seem to ignore in his autobiography and there was no more contact between the two men.

When Mr. On died in 2006, an email was apparently sent to McCain’s office requesting a message of condolence for the family. There was no response.

Whether or not McCain believed Mr. On is unclear.

But his refusal to acknowledge his heroism is likely to fuel other, more damaging allegations that McCain exaggerated elements of his PoW ordeal in Hoa Lo prison.

Phung Van Chung, 70, who was a Communist Party official at the time, claims McCain was quickly singled out for softer treatment, adding: “I found out he was the son of an American admiral, so the top people wanted to keep him as a live witness so they could use him for negotiations.”

Mr. On’s son-in-law, Nguyen Ngoc Toan, said: “Before he died, he told us not to sell the medal McCain gave him.

He said, ‘If any of the grandchildren ever go to America, having it might help them.’“

In 2000, McCain, by then a presidential candidate, visited the lake that almost claimed his life.

“His entourage was outside our house but Mr. McCain just passed by,” said Mr. On’s widow, who insists she bears no grudge.

Behind her calm words, however, lies an anxiety to right the injustice she feels her husband suffered.

As we prepared to leave she clutched my hand and said: “Please help us to remind Mr. McCain what my husband did.

“Just a few words will be enough to let the family know that he is grateful.”