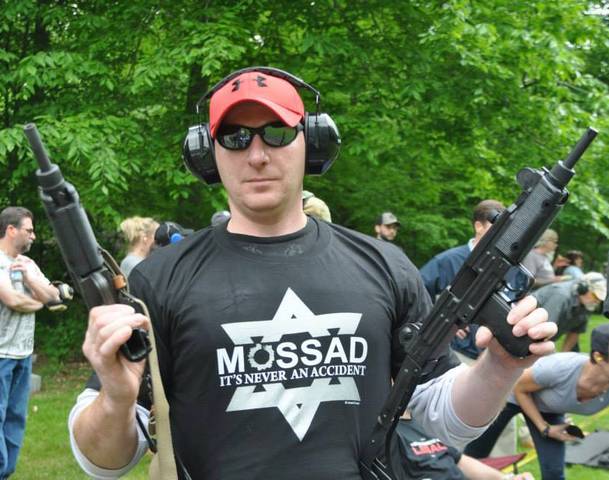 In January of 2013, the Police Chief of Gilberton, Pennsylvania (population 769) submitted a resolution to the town council that would nullify unconstitutional Federal, state and local gun control measures.

What put him on the map, however, was a series of profanity-laced YouTube videos that Chief Mark Kessler recorded and uploaded which featured the constable shouting obscenities at America’s foes and shooting off exotic automatic weapons.

Clearly, this was not the behavior of a law enforcement professional but I excused it as the rough actions of a red neck taking a stand for what he thought was right.

Yes, Kessler appeared to be unstable—the kind of guy who would mishandle a firearm and shoot himself in the hand—but that’s what you get when a coal miner becomes a small town police chief.

I traveled north, met Kessler in person, interviewed him and presented what I thought was a sincere individual to my readers.

I continued to support Kessler when his antics had their natural outcome and he was fired by the Gilberton Board. I advised him to pack his bags and find a precinct where his outspoken support of the Constitution was appreciated, even if it meant moving to another state. Instead, he stayed put and attempted an ill-advised last-minute run for county Sheriff. He called me on a Sunday afternoon and asked me to support his campaign with a column which I kindly did.

Examples abound of disciplined professionals who didn’t need outrageous antics to take a stand for the Constitution.

Milwaukee County Sheriff David Clarke warned that a 2nd American Revolution would ensue if laws were enacted that included gun bans and door-to-door confiscations. He also vowed never to enforce such laws.

Flynn responded, “My message to my troops is if you see anybody carrying a gun on the streets of Milwaukee, we’ll put them on the ground, take the gun away and then decide whether you have a right to carry it.”

The police chief was just as aggressive at a Senate judiciary hearing last week. He testified in support of an “assault weapons” ban, saying most innocent people do not use such weapons to defend themselves.

Now, Clarke is apologizing for Flynn’s behavior “on behalf of my constituents.” On Tuesday, Clarke revealed the contents of a letter to judiciary committee member Sen. Lindsey Graham, R-S.C. In the letter, the sheriff accuses Flynn of being “embarrassing” and “rude.”

“I watched in utter disbelief as [Flynn] talked over you and interrupted you,” Clarke wrote. ~ Gun-Control Battle Pits Sheriff vs. Police Chief, Garth Kant, WND

This is proof that all top law enforcement officials and all judges should be held accountable to the electorate and not appointed by co-opted, corrupt and Elite-controlled politicians.

After the Aurora, Colorado false flag theater shooting, an insane rush was on by Colorado Democrats to enact as many draconian gun control laws as possible. The Democrat governor quickly signed them into law before Coloradans realized what had happened. In the aftermath, a coalition of Colorado sheriffs sued over what they had done.

When the U.S. Justice Department attempted to subpoena Indiana raw dairy farmer Richard Hochstetler on accusations by the U.S. Food and Drug Administration that his products were poisoning locals, Elkhart County, Indiana Sheriff Brad Rogers said, “not in my jurisdiction.”

Frank Szabo—a candidate for sheriff in Hillsborough County, Massachusetts—stated that, if elected, he would take the stand against abortion no one else had the courage to take and close down any abattoirs in his jurisdiction even if it took deadly force to do so. It’s shocking that such a man was even allowed to run for sheriff in Massachusetts.

Local sheriffs are arguably the most powerful bulwark against central government tyranny and there are clearly professional ways to take a stand but Mark Kessler wasn’t being professional. Was he just a country bumpkin desperate for attention or was something more sinister at play?

In the summer of 2013, Kessler entertained Tea Party presidential candidate Robby Wells. I drove up to take notes and write a column. We all sat together and spoke over breakfast in a local Frackville, PA diner. Afterwards, we removed to a remote location where Kessler did his target shooting.

At the time, I remember being amazed at the array of weaponry that Kessler and his posse of supporters were able to brandish. I was equally amazed at the ammo-cans of rounds present. How was the police chief of a town of less than 1,000 citizens able to acquire it all? I was curious but I didn’t dig.

Personally, if I intended to make a brash video of personal opinion, I would never have included weapons, equipment and/or uniform items that belonged to my place of employment. But, again, I didn’t dig.

I still saw Kessler as sincere and he continued to feed me inside information. Kessler disclosed to me that Pima County, Arizona Sheriff Joe Arapio was running a rigged game over their investigation of Barack Obama’s long form birth certificate. His lead detective, former NJ used car salesman Mike Zullo, told Kessler he was not allowed to see the Cold Case Posse brief without signing a non-disclosure agreement.

Red flags began to arise in regard to Kessler’s associations; particularly that of Pete Santilli.

Santilli’s background is shady at best. He has been accused of making false claims about his past. 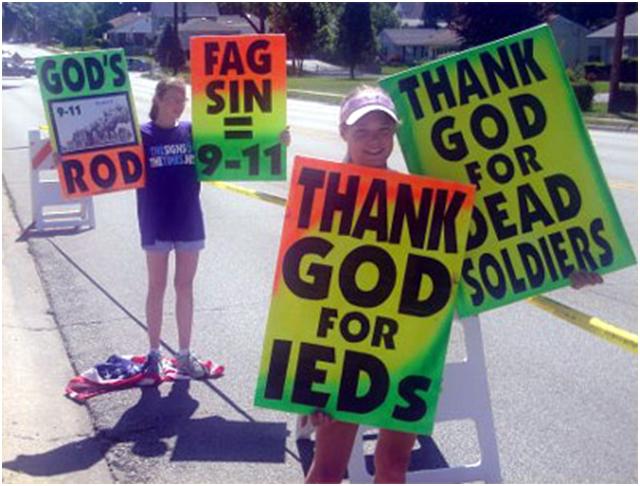 Santilli was a principle backer behind the 2013 “Truckers’ Ride for the Constitution”. He frequently made grandiose and inflammatory claims that Washington DC would be overwhelmed by protestors who would refuse to leave until all politicians resigned. At the time, I wrote that the concept was far more harmful than helpful. Much like the diseased protests of the Westboro Baptist Church holding obnoxious signs at soldier funerals to “protest” U.S. government policies, those harmed by the event had nothing to do with the original misdeeds and those guilty were left completely untouched. Further clogging the already outrageous traffic flow of the DC area would not win the Patriot or Truth movement any new allies.

Somehow, Santilli had access to funds donated to promote the event and he was later accused of having embezzled half a million dollars of them.

A document found online purports to depict Santilli decrying the Sacramento, California FBI office for their lack of support in shielding Santilli from his role in sabotaging the event. 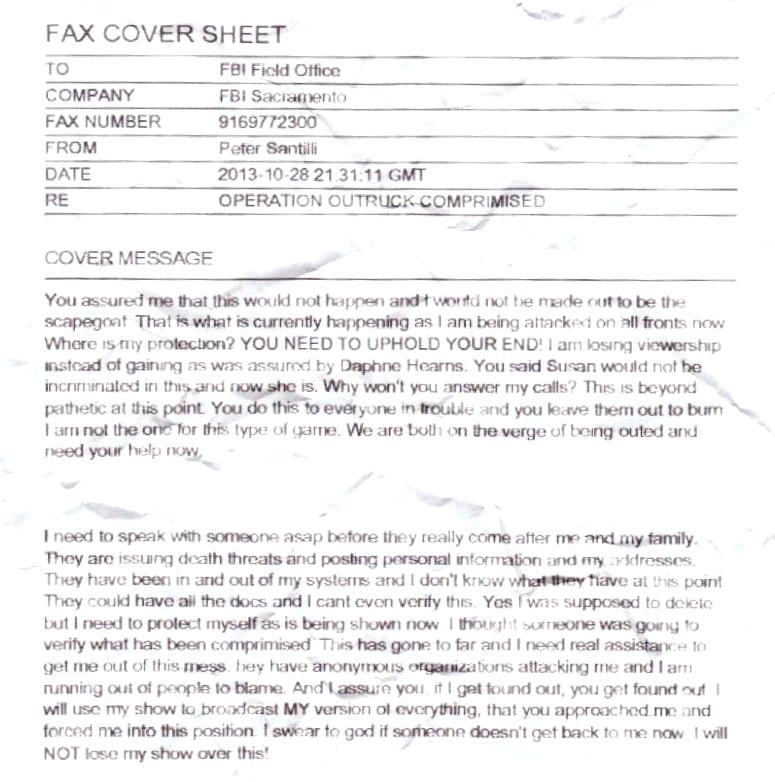 Santilli promotes himself as the Howard Stern of the Truth Movement and his short-lived radio show featured co-host Susannah Cole whose on-air voice and persona immediately harkens to Stern’s co-host, Robin Quivers.

Interestingly, many of the accusations about Santilli’s corrupt past come from a domain featuring Cole’s name.

If it is Cole, herself, she’s not the only jaded, former Santilli partner.

There appears to be or have been quite a vicious legal battle between Posel, Posel’s family and Santilli.

A Santilli/Kessler connection is, indeed, not a good sign.

Finally, on Fox News Radio, Kessler made it official.

Tuesday on “The Alan Colmes Show,” former police chief Mark Kessler made one of the most shocking revelations Alan had ever heard, and Kessler said he was exposing it for the first time anywhere.

Kessler, who infamously made online videos insulting liberals and firing his gun, claimed that the federal government put him up to making the videos in order to attract “the worst of the worst” and said the videos even led to arrests of “lone wolf” terrorists.

It calls to mind another “Patriot” bomb-thrower, Adam Kokesh.

The summer of 2013 seemed to the big push for COINTELPRO operations.

Kokesh is another “Truther” with a past littered by failed endeavors. He frequently committed pro-Marijuana stunts in the nation’s capital that got him arrested. After one of these arrests, he began to implore his video/radio audiences to join him in an armed protest at the Washington DC Mall. Washington DC is a municipality that notoriously flaunts both the Constitution and judicial decisions regarding it’s tyrannical proscriptions against firearm ownership and carry. It was a clear case of disaster waiting to happen.

Was Adam Kokesh approached by the Federal Bureau of Instigation during one of his many jail stays?

Kokesh seems to match the Santilli/Kessler personality profile: ripe for being rolled.