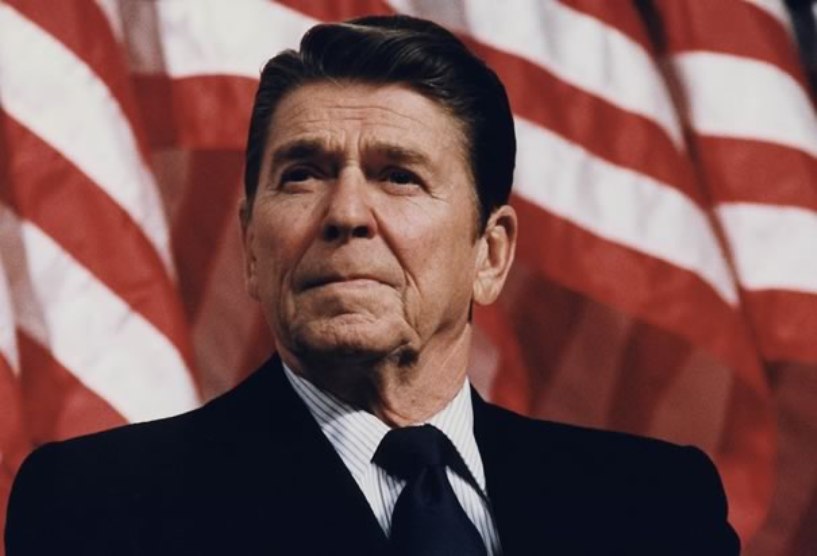 After a long battle with Alzheimer’s disease, Ronald Wilson Reagan, 40th president of the United States, passed at the age of 93.

Arguably the greatest president since Teddy Roosevelt, Ronnie combined the charm of a diplomat with the unwavering strength of an ideologue. He arrived at one of this nation’s most crucial junctures in history—the height of the Cold War.

Rather than pander as American politicians have done since Franklin Roosevelt to the nation that slaughtered 40 million (by comparison, the Nazi deathcamps murdered 6 million), President Reagan confronted the “evil empire” and forced it to capitulate in the face of American prosperity and technology.

Is it any wonder that the Biblical number “40” always seems to point towards triumph through trial? —For 40 years Israel wandered the desert before being brought to the Promised Land. Moses spent 40 days in intimacy with G-d in order to deliver His Law. And our L-rd spent 40 days fasting before being proven by the enemy’s temptations.

But President Reagan was more than just a winning Commander in Chief, he was a good and moral man (quite a contrast to the likes of the Clintons) whose values rose above controversy that threatened his power. Despite unending threats from the Left, the president held fast to his belief in the sanctity of life—

Our declaration and defense of our rights have made us and kept us free and have sent a tide of hope and inspiration around the globe. One of those unalienable rights, as the Declaration of Independence affirms so eloquently, is the right to life. In the 15 years since the Supreme Court’s decision in Roe v. Wade, however, America’s unborn have been denied their right to life. Among the tragic and unspeakable results in the past decade and a half have been the loss of life of 22 million infants before birth; the pressure and anguish of countless women and girls who are driven to abortion; and a cheapening of our respect for the human person and the sanctity of human life. ~ PERSONHOOD PROCLAMATION, January 14, 1988

Again, a disgusting contrast to Clinton who was the first to derail Congress’ Partial Birth Abortion ban. All you have to do is spend a little time in government to find out how difficult it is to get controversial legislation through all the hoops it needs to negotiate to become law to be outraged. That’s before you even get to the details of a procedure too despicable to elucidate here—perpetrated on the most innocent of life while rapists and murderers at worst face a gentle lethal injection (and rarely at that).

There is too much to say about Ronald Wilson Reagan in the space allowed. I recommend the following links to facilitate beginning such an endeavor:

Despite what the press would have us believe, President Reagan was a devout Christian. He was criticized for not regularly attending church once he ascended the White House but family insiders knew why—it was after the first few attended services that the president realized he and his Secret Service entourage were disrupting the proceedings. In an effort to humbly avoid hurting the congregation, he stopped attending openly.

President Reagan is fully worth all of the accolades he is receiving plus many more. It makes me proud to think of a powerful nuclear aircraft carrier bearing his name. The official U.S.S. Ronald Reagan website provides a great bio on the president.

Also worth surfing is Michael Reagan’s site. Michael was adopted by Ron and Nancy and, despite struggling with his dad’s lack of emotion towards him, he continued to love and adore his father. Michael provided some of the most touching moments during the recent events commemorating his father’s passing. He is now an extremely successful political pundit and Christian gentleman who carries on his dad’s ideals in stellar form.

He will be sorely missed, but Michael was right in assuring us during his eulogy that we will all be reunited when we are called to our precious Savior.

When the Media Cry About the “Horrors” of “Waterboarding”, Remember This…

When the Media Cry About the “Horrors” of “Waterboarding”, Remember This…