You have to see it to believe it.

Sunday may be for the God-fearing, but Monday is for the fashion-faithful.  That’s when Dilara Findikoglu—along with all those drawn to the hypnotic, fantastical world she creates through her self-titled label—will head into a Catholic church in London for her spring show.  For the first time, after two smaller presentations, the Turkish designer is sending her clothes down the runway (in this case, a checkerboard stone floor), with a cast that includes the drag artist Violet Chachki and the rapper Brooke Candy.  Don’t expect any preaching to the choir.  Set to a soundtrack that blends boom metal, ‘80s dark wave, and traditional belly-dancing music, her collection might well be accompanied by face tattoos, extreme piercings, or Goth-meets-Victorian makeup.  “Each season I have distinct characters, so every look is different on its own,” Findikoglu says, explaining that her backstage collaborators—hairstylist Cyndia Harvey and makeup artist Isamaya Ffrench—are in sync with her bricolage of far-flung inspirations: Black Sabbath, Alejandro Jodorowksy, Victoriana.  “I have a lot of historical references,” says the designer, who cut her teeth interning for the ever-theatrical John Galliano.  “But you’ve got to use it in your own way.”

Findikoglu established herself at the outset as something of an iconoclast.  Two years ago at Central Saint Martins, she broke rank, staging a guerilla presentation for students whose thesis collections didn’t make it into the official press show.  Since then, rebel muses like Rihanna, Grimes, FKA twigs, and Adwoa Aboah have worn her designs—labors of obsession embellished with such details as tattoo imagery, Ottoman embroidery, or patches advertising favorite metal bands, which she discovered as a girl growing up in Istanbul.  “I was trying to explore new things constantly,” Findikoglu recalls of her deep Internet dives, which stoked interests beyond the comprehension of her Muslim parents.  “I’m into parapsychology and all the occult and magic stuff, so when I was reading those books, they thought I was going to be a Satanist,” she adds with a laugh.  She is not one for doctrine, pagan or otherwise — “I don’t like how religion divides people into groups,” she says — but the dark world suits her self-styling.  Jet-black blunt fringe offsets her milky complexion, which serves as the perfect canvas for a blood-red lip.  “Vampire finally melting under the sun,” she quipped in a recent sunglass-shaded selfie while on holiday in Turkey. ~ Vogue 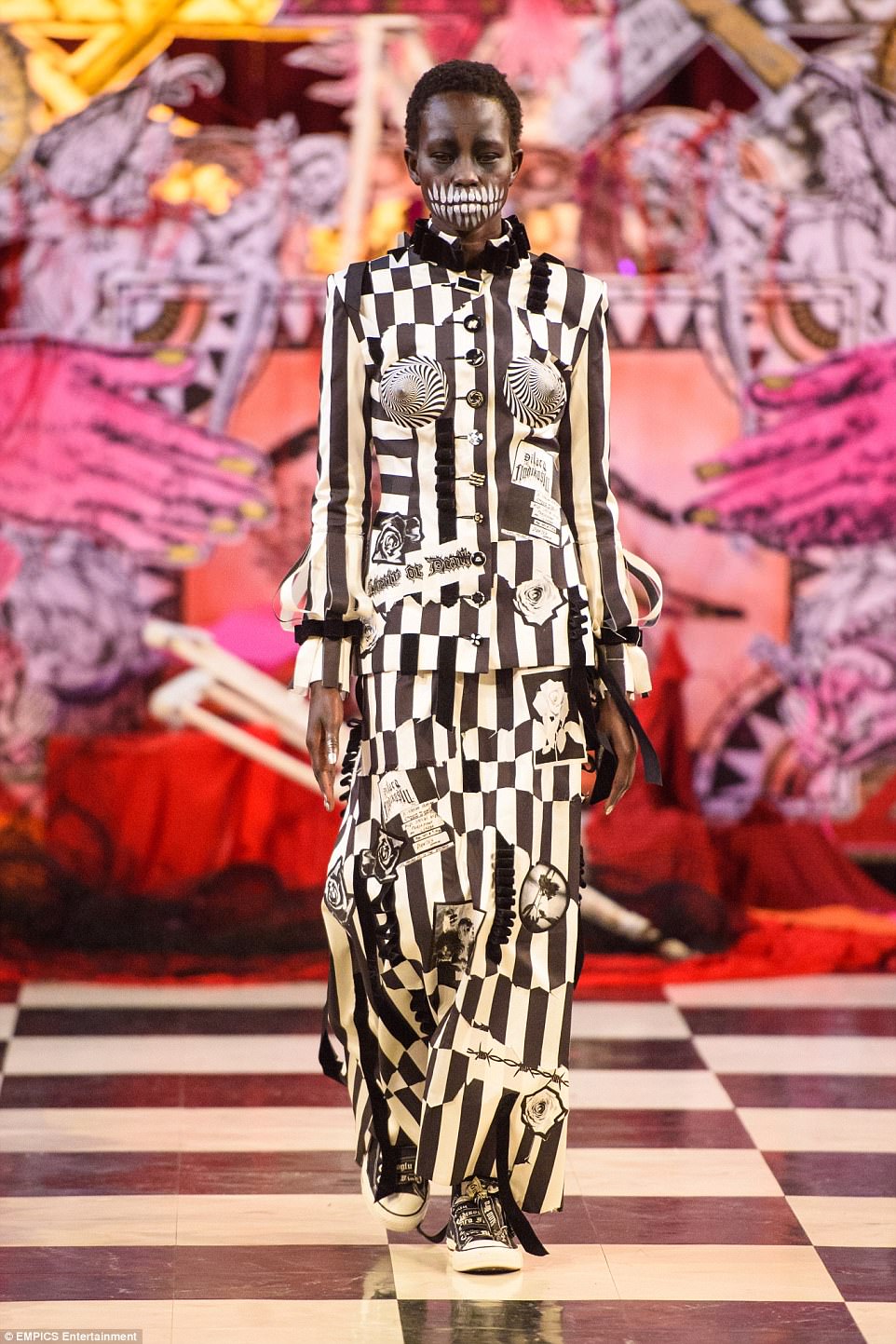 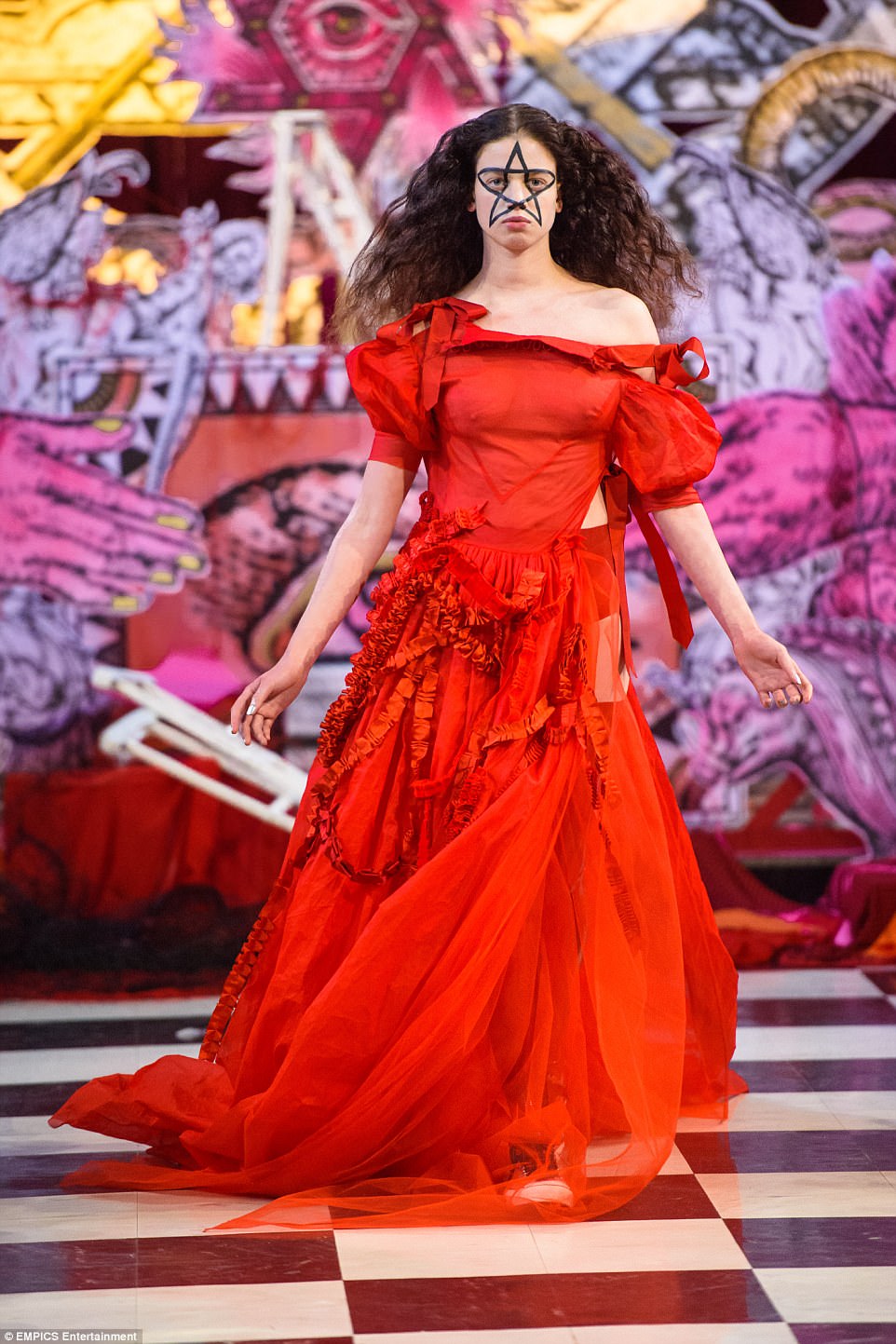 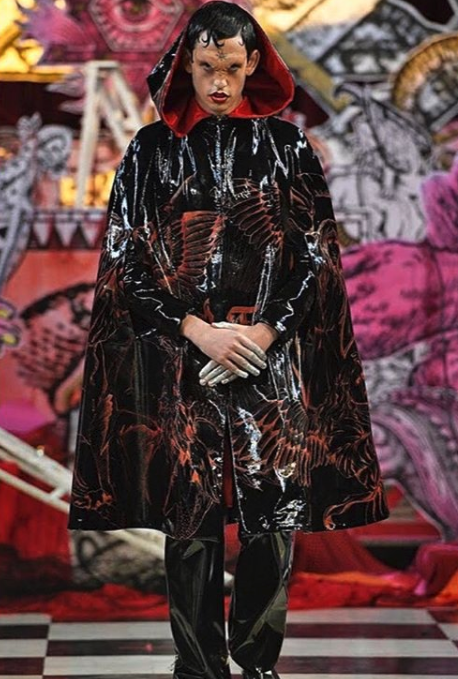 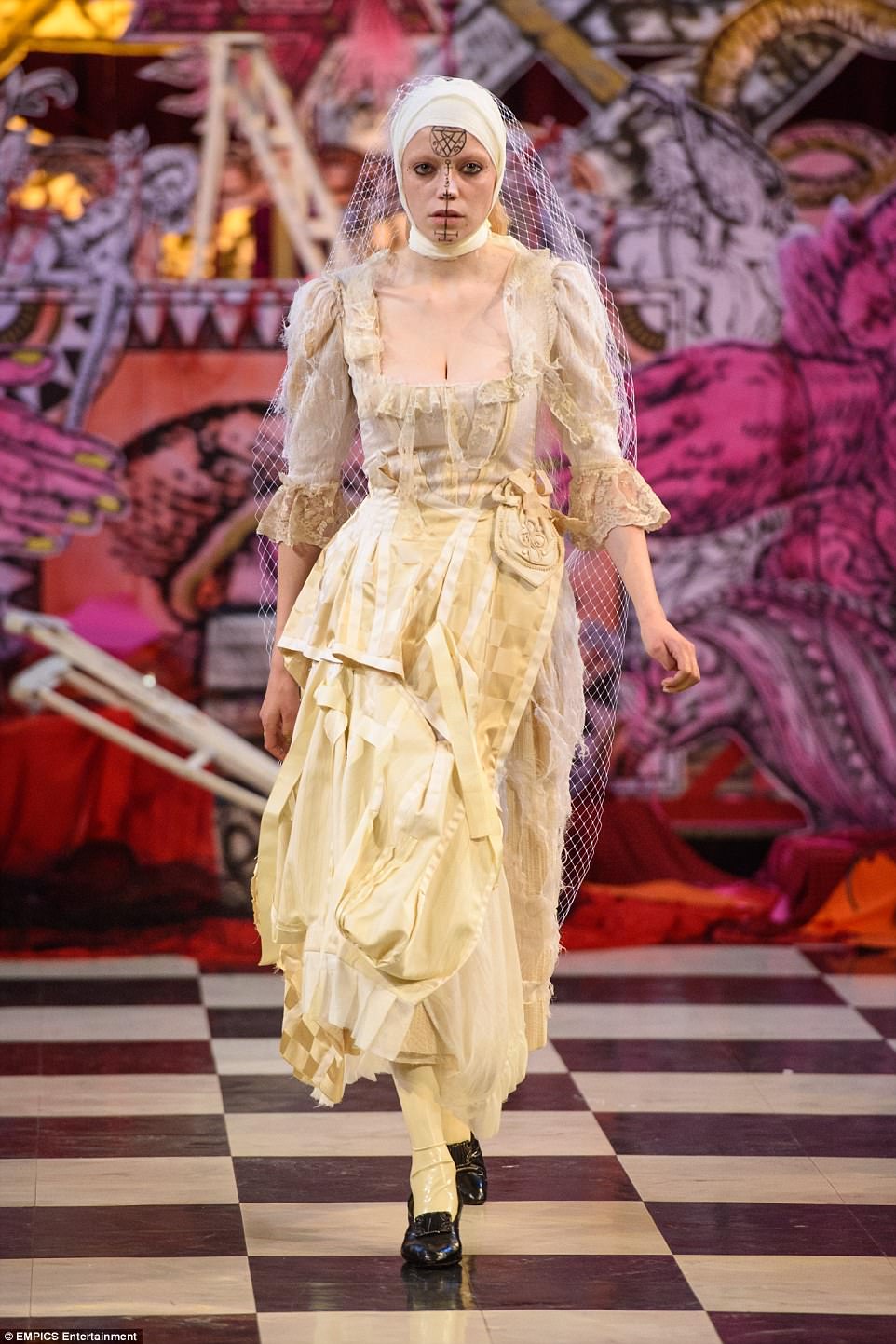 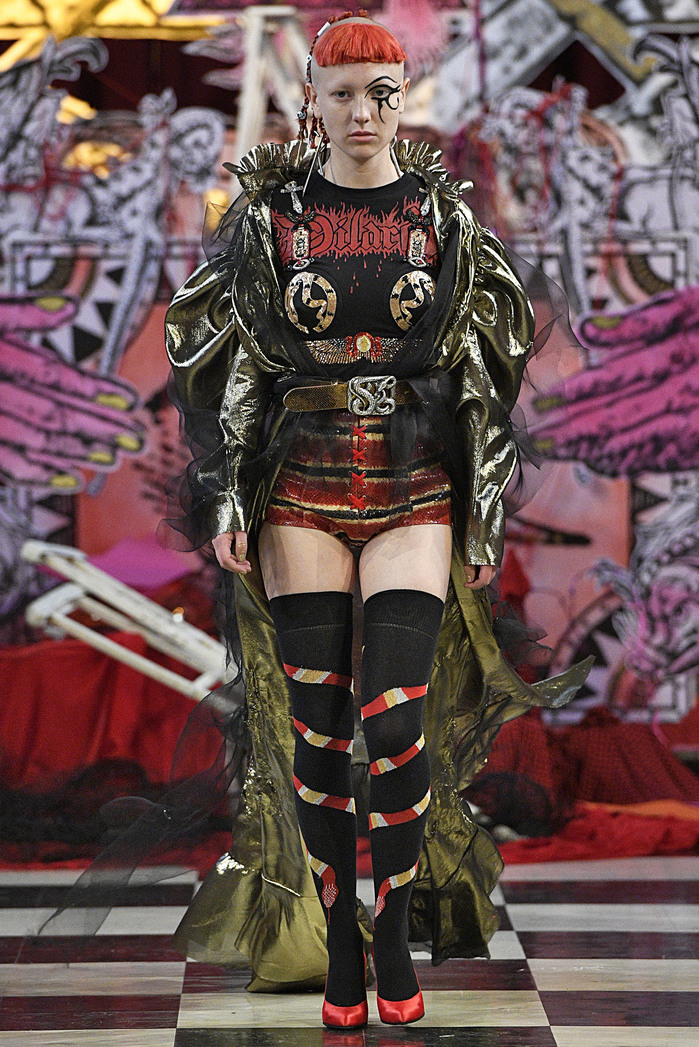 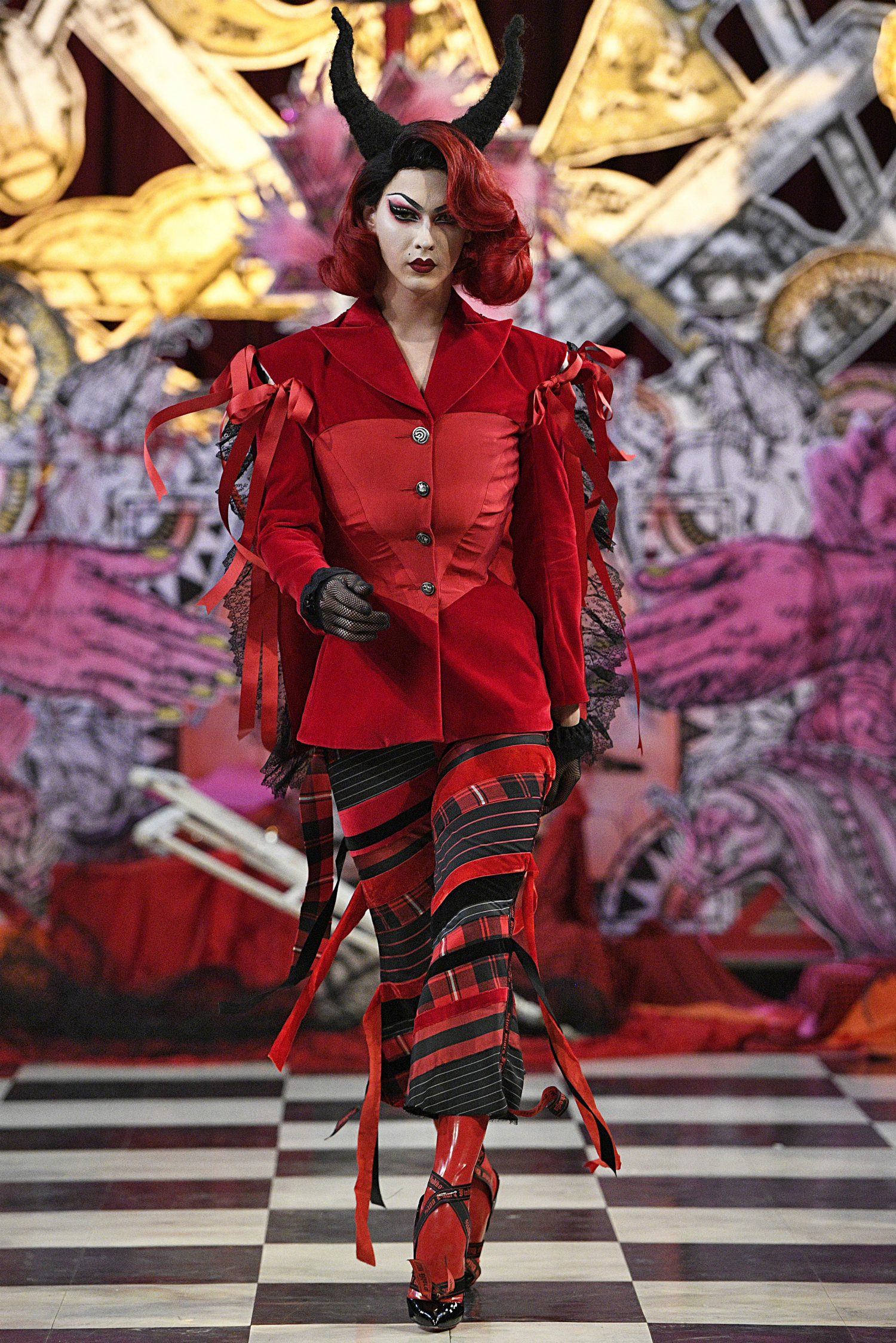 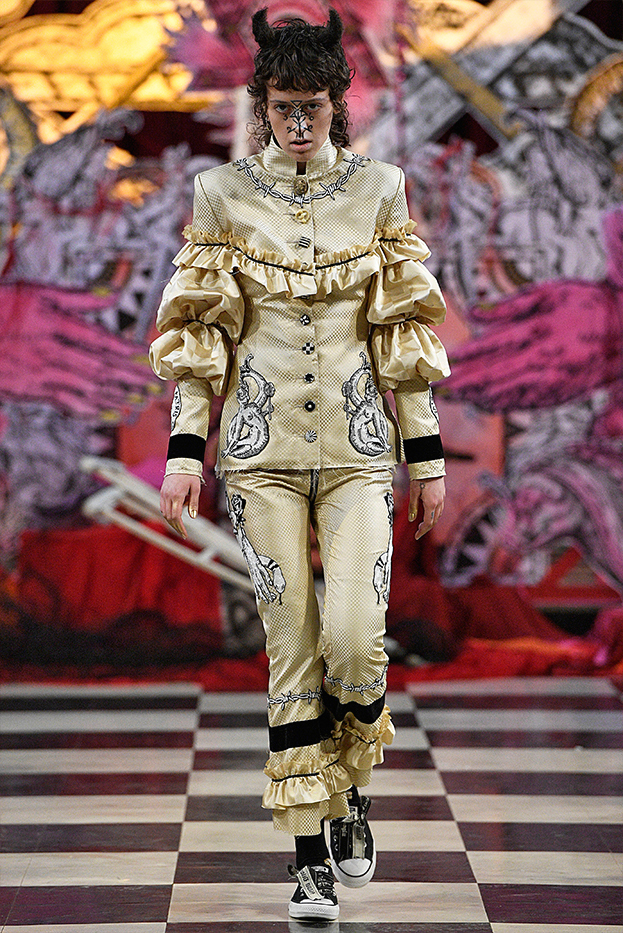 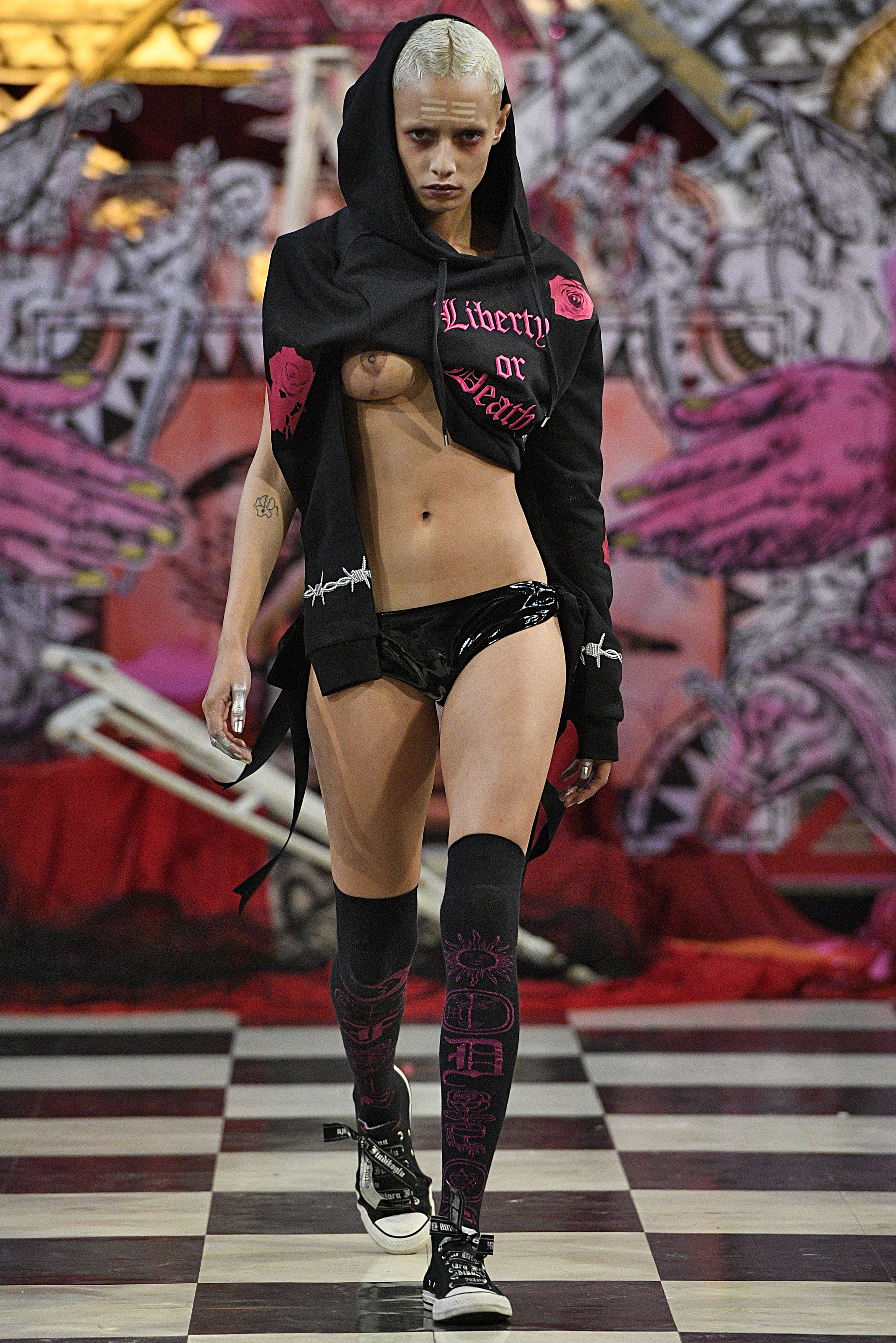 In light of these images, we feel the need to question Dilara’s claim that she doesn’t like the “divisiveness” of “religion”.

But what is interesting is her chosen venue: Church of St. Andrew, Holborn in north-east London.

St. Andrew is, technically, an Anglican Church.  Yet, Wikipedia lists the composition of the congregation as “Modern Catholic”.

The terms Anglo-Catholicism, Anglican Catholicism, and Catholic Anglicanism refer to people, beliefs and practices within Anglicanism that emphasise the Catholic heritage and identity of the various Anglican churches.[1][2] ~ Wikipedia

Although this may surprise some, it is simply the natural progression of Henry’s Church returning to her Mother.

Henry VIII was a loyal Catholic Tudor. In response to Martin Luther and the burgeoning Reformation in general, and Luther’s questioning of the Roman Sacredotal system in his book On the Babylonian Captivity of the Church, Henry wrote a scathing attack via his book On The Seven Sacraments.  Even Henry’s Lord Chancellor, Sir Thomas More, was uncomfortable with how much Henry pandered to Rome (and More was the chief Inquisitor behind stamping out William Tyndale and his English Bible).  More warned Henry that he gave “too much honor to the Pope” and Henry’s response was “There is no such thing as ‘Too much honor to the Pope’.”313

But when it was found that Henry’s Catholic Castilian wife, Catherine of Aragon, could give him no male heirs, he beseeched Pope Clement VIIc for a “special dispensation” to divorce her and it was refused.  The Defender of the Faith then crowned himself the Pontifex Maximus of England’s Roman Catholicism which became the Anglican Episcopal Church of England.

After the break was made, anger at Rome seethed and a turn-around occurred as dramatic as Constantine’s ceasing of Christian persecution.

Henry left Catherine of Aragorn for Anne Boleyn but after three miscarriages she could only bear Henry a single girl.  She was brought up on controversial charges of treason, adultery, incest and even witchcraft and executed in 1536.  By the accounts of most scholars all accusations were specious and this was nothing more than politically-convenient murder conducted by Henry.

The girl that Anne bore her murderous husband was Elizabeth I.  Anne had been greatly influenced by England’s powerful Protestant, William Tyndale.  As a result, her legacy was far more potent than her husband’s as Elizabeth was England’s best Protestant monarch and her administration one of England’s most prosperous.

Anne was replaced by Jane Seymour who was able to finally give Henry a son, Edward VI.

Edward’s convictions on Scripture and Protestantism were so strong he would’ve made Elizabeth look like her sister, Bloody Mary.  Edward was tutored by Reformers like the Archbishop of  Canterbury, Thomas Cranmer and the fiery Scott evangelist John Knox. …

Like Alexander taught by Aristotle, Edward’s passion and pure ideology threatened to make him the most powerful Protestant of his time — perhaps ever.

That was something neither Rome, nor her assassins, could entertain in the slightest.

As England’s first true Protestant King, Edward was most certainly a target for assassination. Author Susan Higginbotham brings up the astounding accusation that, not only was Edward poisoned, his body was switched before burial to hide the evidence.1475 ~ Illuminati Unmasked, Johnny Cirucci317

In 2016, a fascinating incident occurred which showed just how much Henry’s “Protestant” Church of England is owned by the “Mother Church”.

A Church of England vicar kicked, bit and spat at a police officer and paramedic while claiming he had “diplomatic immunity” from the Vatican, a court heard on Friday.

Parish priest Gareth Jones, 36, had been drinking heavily when he passed out on a street in his clerical attire and swore at a paramedic when he tried to wake him up.

The married father-of-one, who was ordained in 2006 and serves at St. Mary and the Virgin in Great Ilford, north-east London, then lashed out and kicked the emergency worker twice in the leg.

When two police officers intervened, he kicked one in the cheek, prosecutor Edward Aydin said.

“He says: ‘I have diplomatic immunity’,” said Mr. Aydin.

“He is growling, makes no attempt to respond to a caution and continues to shout that he has diplomatic immunity.”

He added: “I’m not sure if he has anything to do with the Vatican because he is with the Church of England.” ~ Telegraph

This was something I warned you about that same year—

Romans in vicar vestments run all the way to the top at Westminster.

The 104th Archbishop of Canterbury, Rowan Douglas Williams, was recommended by “closet Catholic” Prime Minister Tony Blair and immediately underwent a pagan ceremony to have him promoted to the highest Druidic Degree just prior to his enthronement.375  Williams’ 10 years of “service” included pushing to have his homosexual friend376 Jeffrey John appointed Bishop of Reading377, claiming that sodomy reflected the “love of God”378, calling Sharia law “acceptable” and “unavoidable”379 and announcing that unity of all Christian sects under Rome was a “matter of urgency”.380

This can be explained by his audience in 2003 before the Catholic Pole chemist and salesman who helped get cyanide into the Nazi extermination chambers during WWII,381 Karol Józef Wojtyła where, unlike Thomas Cranmer (who burned his hand off rather than serve Rome) he carefully kissed the ring of Pope John Paul II. 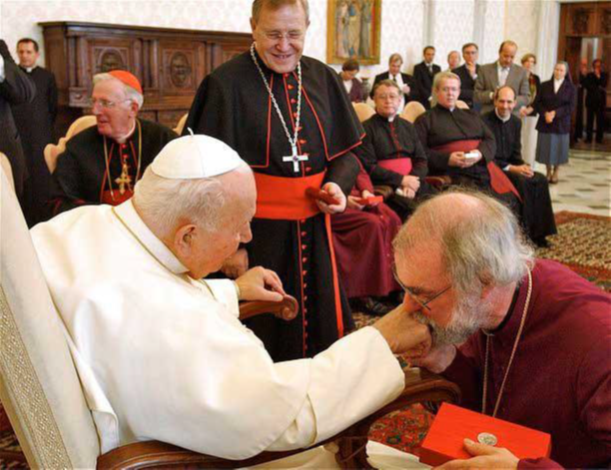 Media such as “Dazed Digitial” was quick to blame only the Anglican Church.

In trying to learn about topics such as these, one of the first places truth-seekers go is the extremely-popular blog “Vigilant Christian”.  It doesn’t take long to see why “Vigilant Christian” is so popular when he calls St. Andrew a “Christian church”.

For that matter, so did Breitbart.com.

One of the sources quick to stress that there was nothing unusual about Breitbart’s death from stress, was his successor, Steven K. Bannon.

Some were surprised when Donald Trump chose Bannon (fresh off his visit to the Vatican) to run his 2016 Presidential campaign but they share a Jesuit education.

Trump has an affinity for Goldman Sachs bankers and Bannon is no exception.  In fact, for Bannon, his time at Goldman was akin to becoming a Jesuit.

Although some may question our assertions that Rome rules the world from behind her insurgent agents on behalf of the Devil but, for us, it’s just a walk down the aisle.