The Abomination of Desolation

When I first wrote my previous column, I got a little excited.  The original title was “8 Signs in the Heavens Say Christ to Return in 2017!”

Well, according to Daniel 9, there are one or two minor events that need to occur before Christ returns like the appearance of the anti-Christ, his 7-year covenant with Israel, the Tribulation and the Abomination of Desolation.

Have you put serious thought into the idea that Christ’s Return in immanent?

An accounting for how we live our lives is guaranteed.

Then Jesus said to His disciples, “If anyone wishes to come after Me, he must deny himself, and take up his cross and follow Me.”

“For whoever wishes to save his life will lose it; but whoever loses his life for My Sake will find it.”

“For what will it profit a man if he gains the whole world and forfeits his soul?  Or what will a man give in exchange for his soul?”

“For the Son of Man is going to come in the Glory of His Father with His angels, and will then repay every man according to his deeds.” ~ Matthew 16:24-27, NASB (capitalization added to correct disrespect)

As I continue to try and alert the Body of Christ to the real dangers attacking them, I’m finding that the majority of “Christian” ministries aren’t interested in truly feeding the Flock.

Status quo is lucrative and safe.  Real Truth is neither.

However, it states very clearly in Ezekiel 33; a watchman who sees danger and keeps his mouth shut to it, is personally responsible for the harm he or she does.

But let’s talk about some of these events that are supposed to occur before the Return of Christ; particularly the desecration of the Temple—the Abomination of Desolation.

What is truly disconcerting is how many Christian leaders are telling their flocks that they have no need to prepare for difficult times ahead.  They misquote I Thessalonians 5:9 “the Church is not appointed to Wrath” as proof that Christians will not endure the Tribulation.

This is a heretical misuse of what Paul is saying.  Simply examining just the second half of the verse explains why and more context destroys using it in such a manner completely.

…let us be sober, having put on the breastplate of faith and love, and as a helmet, the hope of salvation.  For G-d has not destined us for Wrath, but for obtaining Salvation through our L-rd Jesus Christ, who died for us, so that whether we are awake or asleep, we will live together with Him. ~ I Thessalonians 5:8-9, NASB (capitalization and abbreviation added for clarity and to correct disrespect)

Clearly, Paul considers the Wrath of G-d to mean the damnation of the soul.

Trial and tribulation are a guaranteed part of Christian living.  Any “Christian” who isn’t enduring tribulation should fear for their very Salvation.

His disciples said to Him, “See, now You are speaking plainly, and using no figure of speech!  Now we are sure that You know all things, and have no need that anyone should question You.  By this we believe that You came forth from G-d.”

Jesus answered them, “Do you now believe?  Indeed the hour is coming, yes, has now come, that you will be scattered, each to his own, and will leave Me alone.  And yet I am not alone, because the Father is with Me.  These things I have spoken to you, that in Me you may have peace. In the world you will have tribulation; but be of good cheer, I have overcome the world!” ~ John 16:29-33 NKJV, (abbreviation added for respect)

I have warned you repeatedly to prepare.

The Rapture Isn’t Coming For You, But These Things Are

Prior to the complete fabrication of the “pre-Tribulation Rapture” in 1830 by John Nelson Darby, all of Christendom’s greatest minds were teaching that the Body of Christ will endure the anti-Christ and his Tribulation.

Cyrus Scofield was a convicted felon abandoned his Catholic wife in order to immortalize Darby’s heresy seemingly clear of Jesuit influence (which I uncover in my book).  His Scofield study Bible is responsible for several grievous heresies in Christendom such as;

Although one would think giving too much help to political Israel isn’t in the same class as sowing dangerous disinformation in the Body of Christ but it has spawned heretics like John Hagee1 who claims that Israel is without condemnation because Yeshua never claimed to be their Meshiach.

Hagee actually seeks out charlatans like Benny Hinn to encourage them as they fleece the Flock.

Christians know that a key event will occur to signal the end of our era; the Abomination of Desolation.

“Therefore when you see the Abomination of Desolation which was spoken of through Daniel the prophet, standing in the Holy Place (let the reader understand), then those who are in Judea must flee to the mountains.  Whoever is on the housetop must not go down to get the things out that are in his house.  Whoever is in the field must not turn back to get his cloak.  But woe to those who are pregnant and to those who are nursing babies in those days!  But pray that your flight will not be in the winter, or on a Sabbath.  For then there will be a great Tribulation, such as has not occurred since the beginning of the world until now, nor ever will.  Unless those days had been cut short, no life would have been saved; but for the sake of the Elect those days will be cut short.” ~ Matthew 24:15-22, NASB (capitalization added for clarity of unique events or groupings)

The Abomination of Desolation has to do with a desecration of “the Holy Place”: the Temple.

This is confirmed by Daniel in regards to what happened to the first Temple.  It was desecrated by the Greek Emperor Antiochus IV (Epiphanes)—

Forces from him will arise, desecrate the sanctuary fortress, and do away with the regular sacrifice.  And they will set up the Abomination of Desolation. ~ Daniel 11:31

Around 168 BC, Antiochus Epiphanes responded to a Jewish revolt in brutal fashion; he slew the High Priest, Jason, murdered tens of thousands of Jews—men, women and children—and erected an image of Zeus that looked like him inside the Temple.  Some accounts say he also slew pigs inside the Temple to further subjugate the Israelites.

As a result, Christians have been waiting for countless generations to see a third Temple erected in Jerusalem to fulfill this prophecy.

But what if we’re looking in the wrong direction?

In Revelation 13, a beast rises up out of the sea and is given all power and authority by the Dragon (satan).

The beast of the sea receives a deadly head wound but miraculously (magically?) comes back to life.

(from 1503 /eíkō, “be like”) – properly, “mirror-like representation,” referring to what is very close in resemblance

Does the beats of the earth have advanced technology and a terrible military that he wields on behalf of the beast of the sea?

The Temple, itself, is nothing more than a type of the Son of G-d—through it, mankind is made righteous and able to stand in His Perfect Presence.

Cloning is a demonic fact of our existence.  Arrogant, unscrupulous “scientists” do it regularly now.

The Book of Genesis repeatedly states that the organisms created by YHWH reproduce “after their own kind”.  What happens when this Divine process is abrogated?  What life force animates such a being?

We receive an inclination by what happened in Korea, two years ago.  A cloned cow attacked its creator, Professor Park Se-pill of Jeju National University.  It broke 5 of his ribs and cracked his spine.

Is it possible that the Abomination of Desolation will be an attempt to clone the Body of Jesus Christ and animate it with satan, himself?

Let no one in any way deceive you, for it will not come unless the Apostasy comes first, and the Man of Lawlessness is revealed, the Son of Destruction, who opposes and exalts himself above every so-called god or object of worship, so that he takes his seat in the Temple of G-d, displaying himself as being G-d. ~ II Thessalonians 2:3-4, NASB (capitalization added for precision, abbreviation added for respect)

There are relics that could very well have traces of Christ’s DNA.  One of them is the Shroud of Turin.  Although hotly contested as to its legitimacy, many sincere Christians and even secular scientists believe the image of the shroud was imparted to it in a manner that changed its molecular density and made it three-dimensional.

Today, the Shroud is controlled by Rome.

The Lance of Longinus—also known as the Spear of Destiny—is supposedly what the Roman soldier used to insure Christ was dead by thrusting into His Side.  Legend states that any who wield the spear can not be defeated.  Many speculate that it, too, is held by the Vatican.

The sea is often used in Scripture to speak of people, so this beast rises in popularity to represent a great many people around the world.

Of its seven heads, one had receives a terrible wound but is healed and comes back to life.

Is Rome this beast and is Jorge Mario Bergoglio—now “Pope Francis”—this final head?

Bergoglio, himself, has stated shortly after taking office that he’ll be “dead in two or three years.”

This coincides perfectly with the astounding astronomical signs I mentioned in my previous column.

In Genesis 6 we read of creatures that are not created “after their own kind” but result from an aberrant joining of man and angel.  The offspring are the נְפִילִים (naphal) or “fallen ones” but the Greek Septuagint translates them γίγαντεσ, gigantes which means “earth born”.

During Barack Obama’s Middle East Apology Tour in 2009 (where he went to great lengths to apologize for America), while visiting Egypt, some remarked how similar he looked to Egyptian Pharaohs like Akhenaten.  As researchers began to dig deeper, they started to ask, “Is Barack Obama a clone of an Egyptian Pharaoh?” 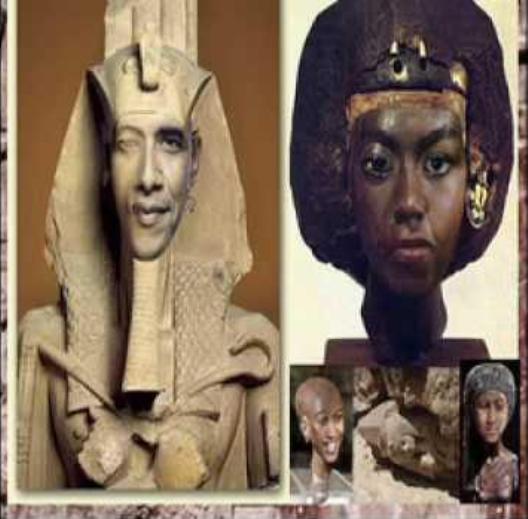 Revelation 13:7 tells us of the beast that rises from the sea;

And it was given unto him to make war with the Saints, and to overcome them: and power was given him over all tribes, and tongues, and nations.

As Foxe’s Book of Martyrs can attest, no power has tortured and murdered Christians like that of Rome.

But my book attests that, truly, Rome is the authority that rules the world from behind the scenes.  The banks in London, slave labor in China and military might of America—all are controlled by the Jesuits.

Through the CIA, the Jesuits have unleashed the Sword of Muhammad—a sword they created—and now wield it against Christians all throughout the Middle East, enacting a literal genocide upon them.

While Western Christians sit back fat, dumb and lazy, waiting for the third Temple to arise and/or the Rapture to come take them, are the two beasts of Revelation 13 already upon us? 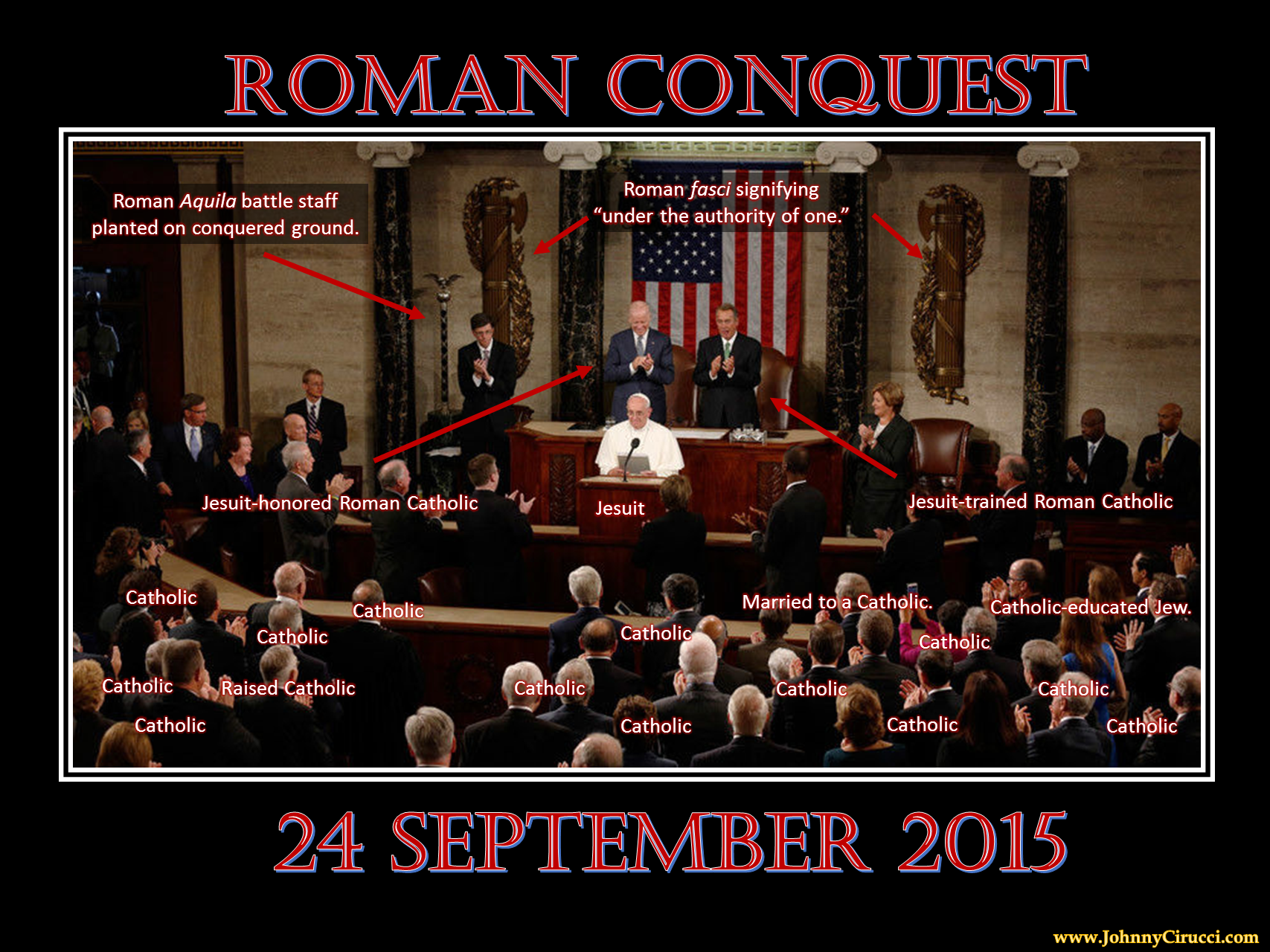