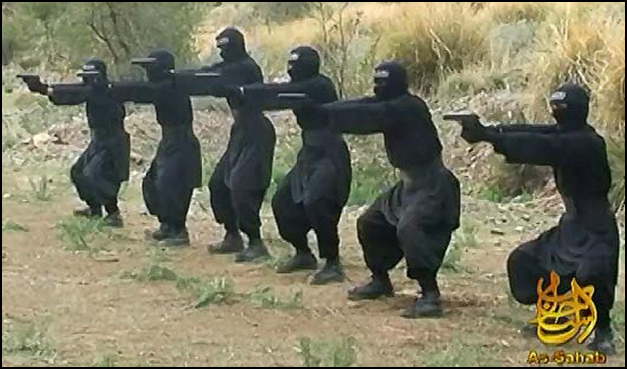 On 05 November, 2009, a major in the United States Army showed up at the Soldier Readiness Center in Fort Hood, Texas where he worked as a psychiatrist with the job of ministering to soldiers leaving for, and coming from, war deployments. But ministering to them wasn’t on his mind that day. Murdering them was. 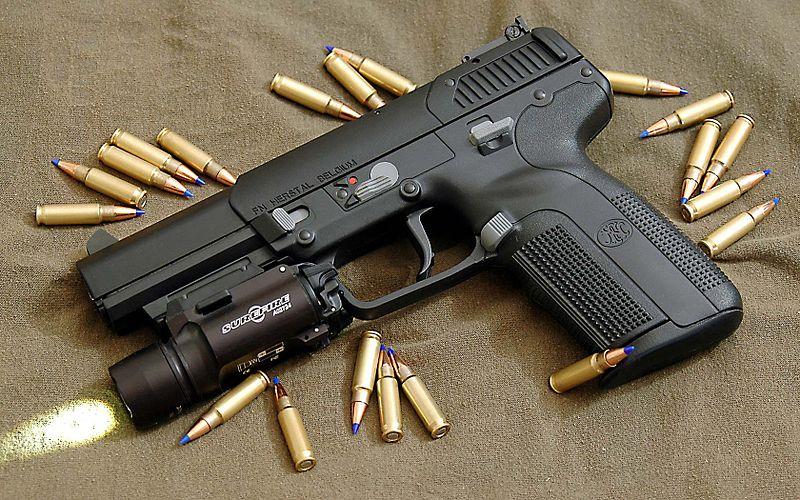 At 1334 hours (1:34 PM) Nidal Hasan (a muslim of Palestinian origin) produced a Fabrique Nationale “Five-seveN” and began murdering soldiers and civilians. The “5-7” is not the weapon of a random act of passion. It is basically an assault weapon in the form of a pistol. With a magazine boasting a 20 round capacity and a 5.7mm projectile pushing a muzzle velocity of an astounding 2100 feet per second (the deadly .45 ACP clocks in at around 830 fps), the 5-7 would be a weapon more likely seen in the hands of a Special Forces operator…especially one that wanted to be sure he could punch through body armor. And, according to Wikipedia, Hasan’s 5-7 was outfitted with both red and green laser designators (the green is preferable for daylight scenarios).

In spite of the use of this hardware, “controversy” surrounds Hasan’s motives to this day (encapsulated by that same Wikipedia article):

Internal Army reports indicate officers within the Army had discussed what they characterized as Hasan’s tendencies toward radical Islam since 2005. Additionally, investigations before and after the shooting discovered e-mail communications between Hasan and Yemen-based cleric Anwar al-Awlaki, who quickly declared Hasan a hero, as “fighting against the U.S. army is an Islamic duty”. After communications between the two were forwarded to FBI terrorism task forces in 2008, they determined that Hasan was not a threat prior to the shooting and that his questions to al-Awlaki were consistent with medical research.

In November 2009, after examining the e-mails and previous terrorism investigations, the FBI had found no information to indicate Hasan had any co-conspirators or was part of a broader terrorist plot. The U.S. has since classified Anwar al-Awlaki as a Specially Designated Global Terrorist, and the UN considers Awlaki to be associated with al-Qaeda. A year after the Fort Hood shooting, however, questions still lingered as to whether the incident was caused by mental health issues, and government agencies still had not officially linked Hasan to any radical terrorist groups.

Certainly, the results of Hasan’s handiwork don’t appear to be that of a mentally-deranged or distraught man in a random act of violence, either: 29 wounded, 14 dead. That’s one man, firing one weapon with a tactical magazine change, dodging soldiers and the tables and chairs they threw at him, over the course of a few minutes. 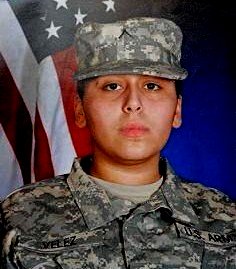 All media accounts will give you the death toll at “13”, but that’s not accurate. The actual total is 14. One soldier, Private First Class Francheska Velez, was home from her deployment early due to her getting pregnant. Both she and her baby were killed; two-time victims of the lies of American Leftists—1) women are indistinguishable from men, especially as soldiers and 2) religiously active muslims are as equally valuable to America and her military as are religiously active Christians and Jews.

Eventually two law enforcement officers (one male and one female) managed to wound and subdue Hasan, but not kill him. And, as soon as civilian investigators and bloggers began looking in to the incident, Nidal Hasan appeared to be less of a mentally deranged lunatic and more of a highly trained muslim operative.

Certainly, the idea that Hasan was acting out of duress or depression became even more hard to believe when it was revealed that he, himself had never deployed.

The official reaction to the bloodiest insurgent attack on a domestic military facility in U.S. history defied comprehension.

The President of the United States, Barack Hussein Obama (no relation), actually took the time to give a leisurely “shout out” during his speaking engagement at a meeting of the Department of the Interior before even mentioning that 43 people had just been murdered or wounded in the middle of an American military facility on home soil.

Even more bizarre is that the “shout out” was fraught with grammar school-level humiliating mistakes, going something like;

But “Joe Medicine Crow” was never awarded the highest possible military citation for valor in combat, but was given the “Medal of Freedom”—a civilian award that can often be more political than meritorious—by Obama, only a few weeks before!

Even more astounding was the reaction of the Chief of Staff of the United States Army, General George Casey, whom Reuters noted:

Asked on NBC’s “Meet the Press” whether Muslim soldiers are conflicted in fighting wars in Muslim countries like Afghanistan and Iraq, Casey said: “Our diversity, not only in our Army, but in our country, is a strength. And as horrific as this tragedy was, if our diversity becomes a casualty, I think that’s worse,” Casey said.

It is unknown why the efforts and energy of the Army staff was placed in candlelight vigils instead of directly addressing the enemy that took 43 casualties. 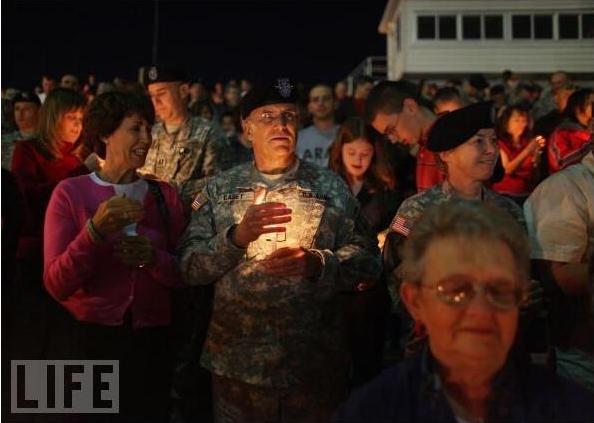 Not sure what George Casey’s wife Sheila, nor the female soldier next to him found enjoyable on the occasion of commemorating 43 casualties at the hand of an Islamist operative in a military post on American soil.

What is known, is that the killing field at Fort Hood was plowed by William Jefferson Clinton:

Among President Clinton’s first acts upon taking office in 1993 was to disarm U.S. soldiers on military bases. In March 1993, the Army imposed regulations forbidding military personnel from carrying their personal firearms and making it almost impossible for commanders to issue firearms to soldiers in the U.S. for personal protection. For the most part, only military police regularly carry firearms on base, and their presence is stretched thin by high demand for MPs in war zones.

Outside of the common Leftist distaste for institutions like the military— 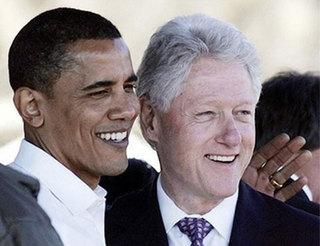 The military is a linchpin for all of society. It is a bastion of traditional values. Former communist David Horowitz recalls that during the ‘60s, radical leftists determined that if they could destroy the U.S. military, they could destabilize the rest of capitalist America. Two things could accomplish this, they said: Putting women into combat, and opening the armed forces to homosexuality.

But there are clues that lead to a very disturbing side of this outrage.

The NY Times—“U.S. Knew of Suspect’s Tie to Radical Cleric”:

Major Hasan’s 10 to 20 messages to Anwar al-Awlaki, once a spiritual leader at a mosque in suburban Virginia where Major Hasan worshiped, indicate that the troubled military psychiatrist came to the attention of the authorities long before last Thursday’s shooting rampage at Fort Hood, but that the authorities left him in his post.

Al Qaeda recruiter, trainer, motivator and planner Anwar al-Awlaki, we’ve been told, is now “the most dangerous man in the world”. But it is extremely interesting to note that he was born in New Mexico and “happened” to run a mosque in VA. Where in Virginia?

—Why, the Dar al-Hijrah Islamic Center in Falls Church. 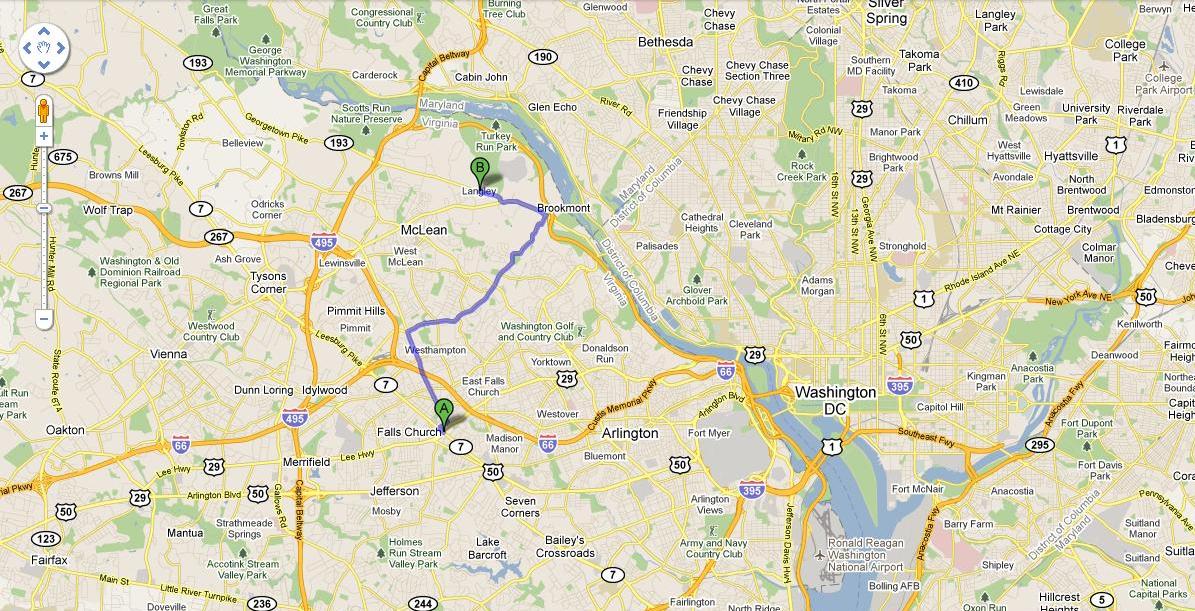 And we all know who lives there. 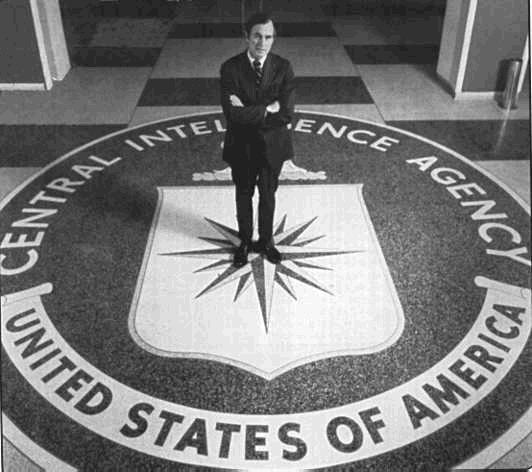 Sorry if that was misleading. Former Director of the Central Intellignce Agency George Herbert Walker Bush is now retired and living comfortably in Houston, Texas.

Another reputable, mainstream source, FoxNews, tells us that “Anwar al-Awlaki” was a guest at the Pentagon shortly after 9/11.

QUESTION: DID NIDAL HASAN RECEIVE PERSONAL INSTRUCTIONS FROM ANWAR al AWLAKI—AN AGENT OF THE UNITED STATES GOVERNMENT INTELLIGENCE COMMUNITY—TO DO WHAT HE DID AT FORT HOOD?