The Jesuits Are Batman’s Bane

The characteristics of the supervillain Bane from the Batman universe share many similarities to that of Jesuits and the Jesuit order:

…intelligent, idealistic, and insane.  A charismatic leader of a growing band of revolutionaries, Bane is unafraid to kill anyone who stands in his way. ~ Charactour.com 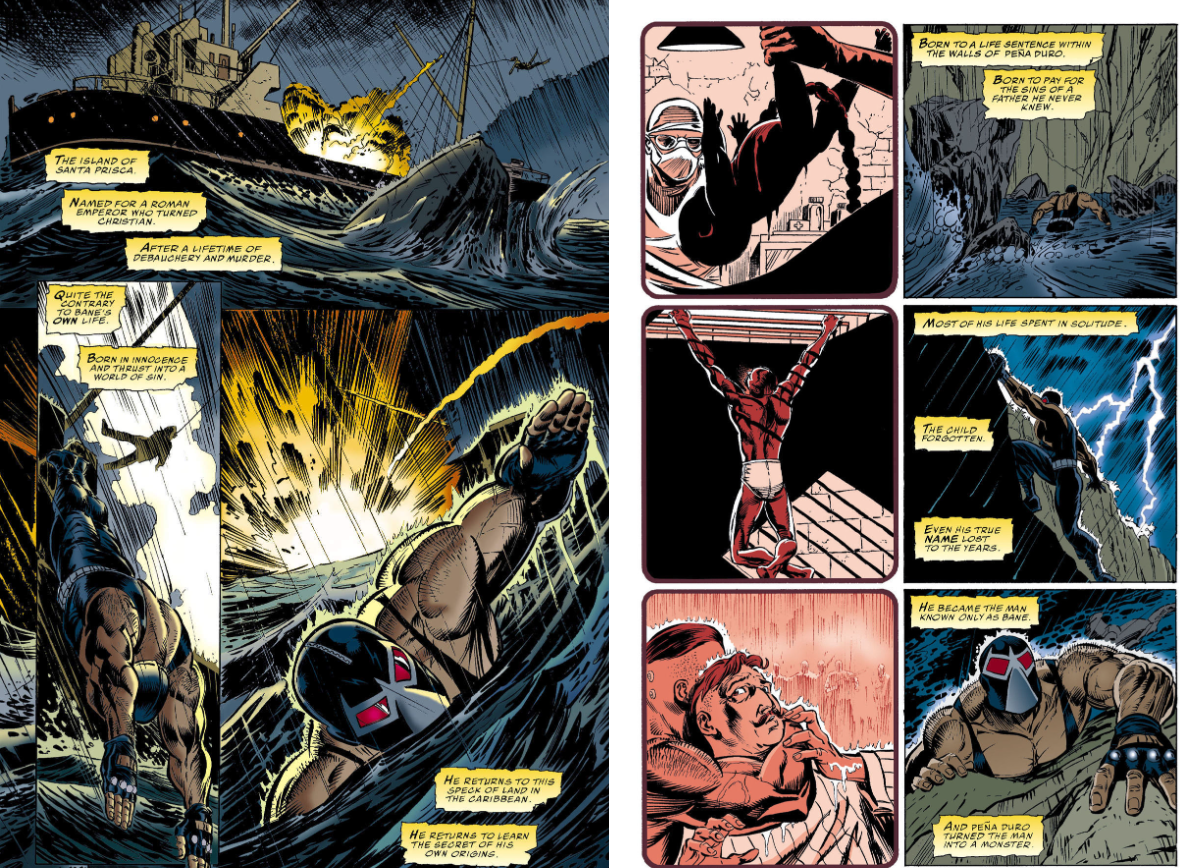 Bane, we shall see in the comic book fictional story rebels against the Jesuits after being educated by them, killing 2 priests using the principles they taught him! They are killed by Bane because he is seeking information on a secret society based in Rome that the Jesuits told him about.  This society, “The Order of Saint Dumas”, is supposedly at war with the Jesuits while having Jesuits being members of society!  Some classic Jesuit theatre indeed.  Good thing there is Catholic Batman to swoop in and save the day.

Quoting from the batman.fandom.com entry on the character Bane we read:

The origin of Bane has similarities with another fictional character, Alexandre Dumas’ Edmond Dantes.  Born to serve the life sentence of his father, Bane’s childhood and early adult life are spent behind the walls of Peña Duro, an infamous prison located in Santa Prisca.  Though imprisoned, his natural abilities allow him to develop extraordinary skills within the prison’s walls.  He reads as many books as he can get his hands on, builds up his body in the prison’s gymnasium, and learns to fight in the merciless school of prison life.  Despite his circumstances, he appears to have found teachers of various sorts during his incarceration, ranging from hardened convicts to an elderly Jesuit priest, under whose tutelage he apparently receives a classical education.  Bane murders this priest upon his return to Santa Prisca years later.  However, he commits his first murder at the age of eight, stabbing a criminal who wanted to use him to gain information about the prison. 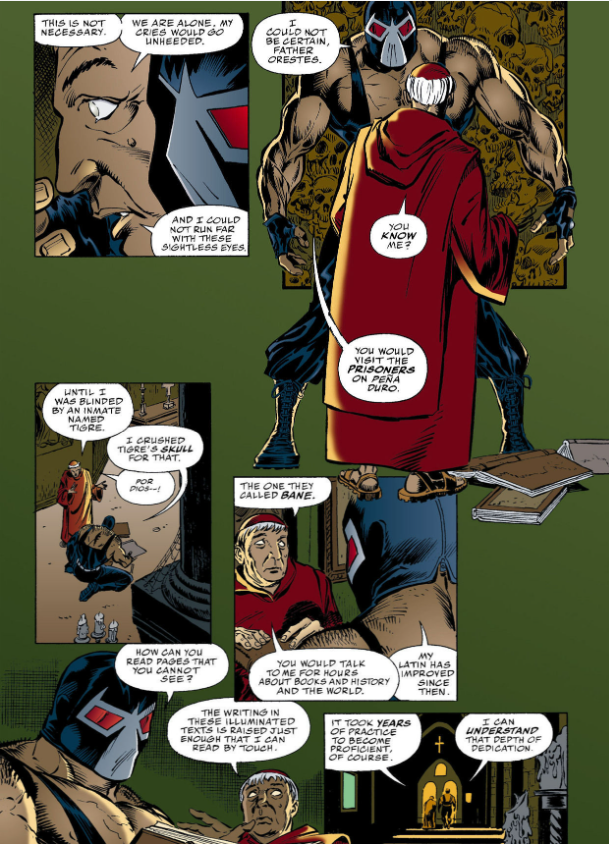 The comic book “Bane of the Demon” #1 (1998) goes into detail on Bane’s relationship with Jesuit Father Orestes. The two are chatting here on page 4.

Jesuit Father Orestes played a big role in educating and training Bane while he was at Pena Duro prison, in the fictional storyline:

Bane’s father, Edmund Dorrance / King Snake is a revolutionary who had supposedly escaped Santa Prisca’s court system.  The corrupt government decrees that his young son will serve out the man’s life sentence, and thus Bane spends his childhood, starting at 4 years old, and his early adult life in prison.  Having no name, he is given the name of the criminal who was supposed to inhabit the cell he is moved into, Antonio Diego, a serial killer who was killed on his way to Pena Duro.  During his early years in prison, Bane carries a teddy bear he calls Osito with him but his cellmate, an older and mysterious elderly Jesuit priest known as “The Father”, convinces Bane that the teddy bear will not protect him and that he’ll have to forge real friendships in life.  The Father gives him a classical education as well as teaching him martial arts, military battle strategies, and the languages of Spanish, English, Portuguese, and Latin.  The Father instills a code of honor and respect into young Bane, while also giving him the belief that he will not spend his entire life behind bars. ~ reddit 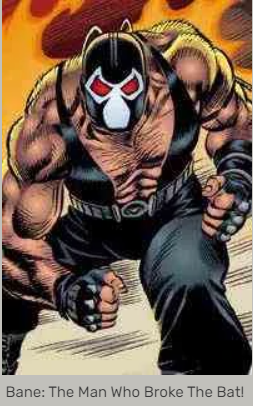 During Bane’s time in the hellish prison called Peña Dura, he had only one friend.  Well, two friends.  First of all there was the kindly, elderly Jesuit priest who gave him the classical education that enabled him to become a master strategist and one of Batman’s few intellectual rivals, a man that the great Ra’s al Ghul says “has a mind equal to the greatest he has known”.  So that makes him pretty smart.  He was a nice old dude, and played a big part in making Bane into the man he is today, but the villain ended up killing him regardless. — 10 Things DC Comics Wants You To Forget About Bane, WhatCulture.com

The source information for the villain Bane’s ties to the Jesuits is the 1998 comic book Batman: Bane of the Demon #1.  —More proof of the Jesuits’ influence and control of Hollywood and pop(e) culture! 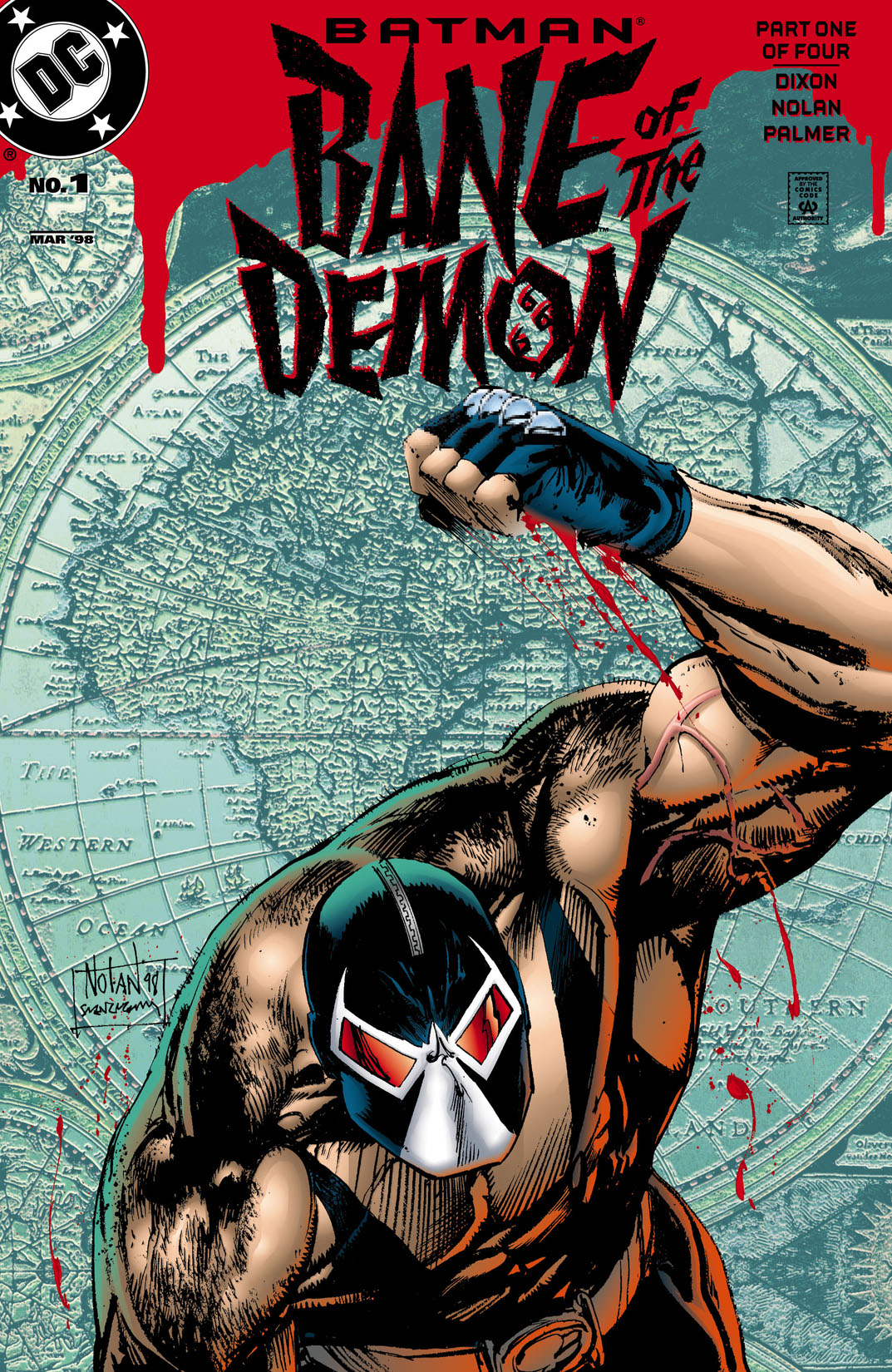 Synopsis for “Bane of the Demon”

Bane returns to his home island of St. Prisca.  He talks to Father Orestes.  They discuss men who could possibly be Bane’s father.  Bane travels to Rome to try and find information about a secret order.  He discovers this group is “The Order of St.  Dumas”.  He travels to Singapore looking for more information.  Mean while, Talia Al Ghul steals the Parthian Text from the same building Bane is in.  ~ DC.Fandom.com 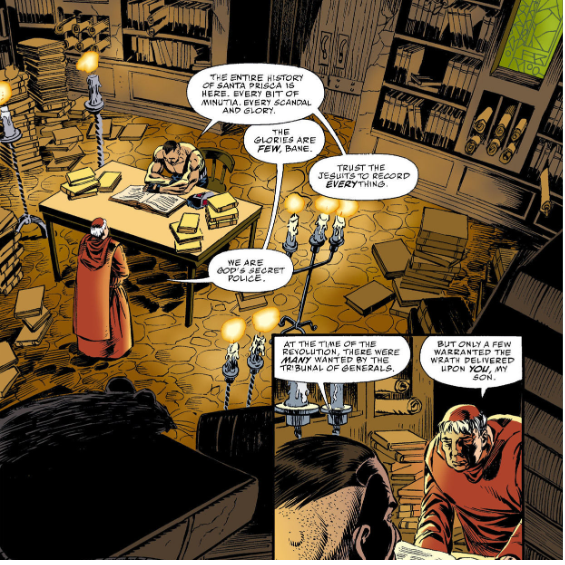 Bane having a conversation with Jesuit Father Orestes on page 7 of “Bane of the Demon” #1. “We are Gods Secret Police” says the Jesuit to Bane. Bane says “Trust the Jesuits to record everything” referencing the Jesuit archive of the history of Santa Prisca which Bane is reading in this photo 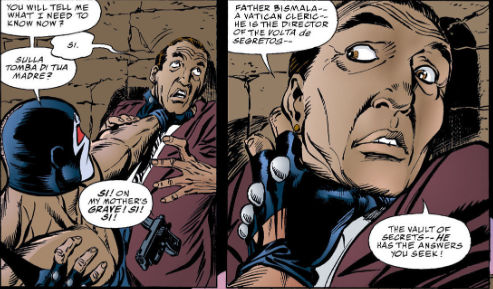 Bane seeking out information on the secret Roman Order. He finds out that a Jesuit, Father Bismala is a member of this secret society. He proceeds to confront Bismala. (page 13) 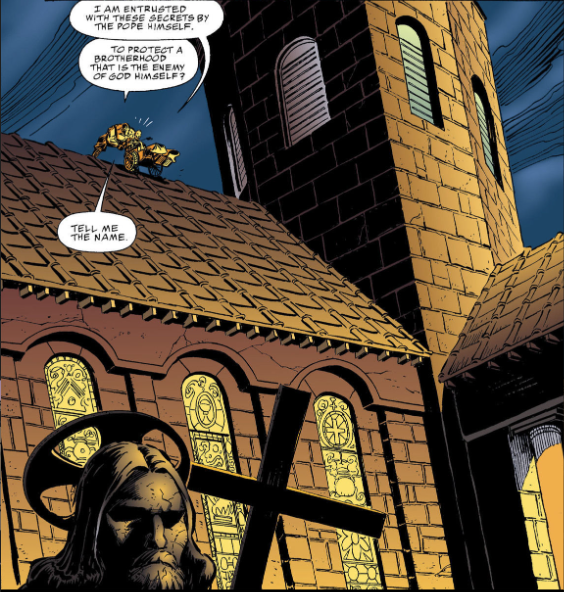 Bane is about to kill Jesuit Father Bisala in Rome after forcing Bisala to reveal the name of the secret Roman Order—“The Order of Saint Dumas”. Bisala says he is trusted by the Pope to keep the name of the order secret!

Earlier on in the story Batman: Bane of the Demon #1 some grandiose Jesuit theatre is on display.  The Order of Saint Dumas, the secret Roman society determined to enact world domination which Bane is seeking to find information on, is supposedly at war with the Jesuit order!  This is shown in Bane’s dialogue with Jesuit Father Orestes on page 9, when discussing the possible identity of Bane’s father—a man nicknamed “Swiss” whom helped the Jesuit and rebels cause a coup on the island St.  Prisca which looks incredibly similar to the coup of Jesuit shaped Marxist revolutionary Fidel Castro in Cuba—The Castro revolutionary look alike in this Bane comic is named El Jefe del Pais, also a possible suspect for being Bane’ s real father.  El Jefe appearance wise even looks much like Jesuit trained Fidel Castro in the comic.  The island of St.  Prisca is named after the Roman Empress Prisca (286-305) who converted to Christianity—this is shown on the first page of the comic book. 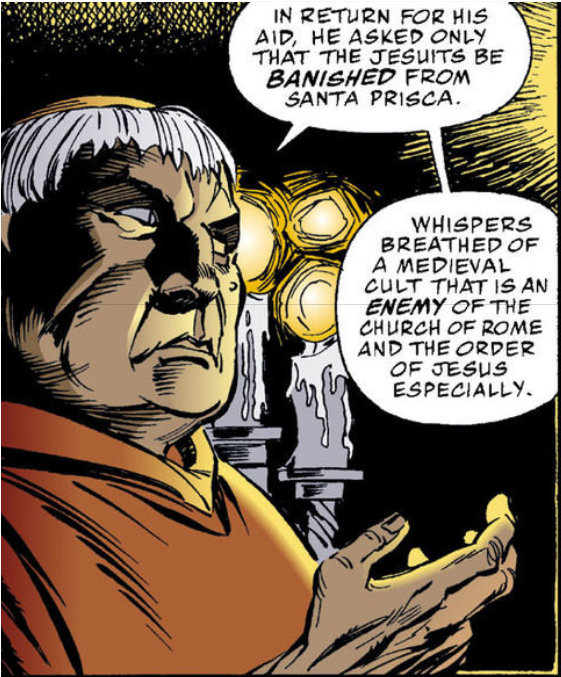 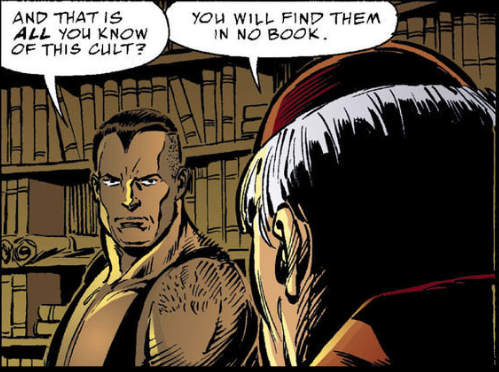 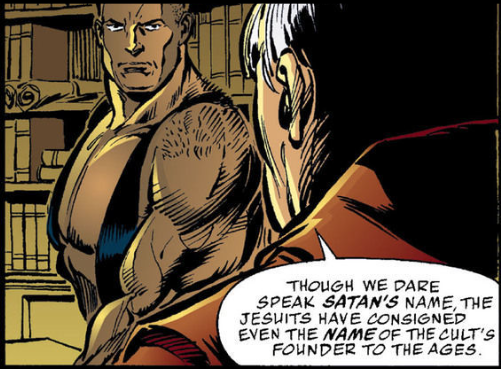 Bane then kills Jesuit Father Orestes and flies to Rome after getting this secret information from him on the Roman Order of Saint Dumas. 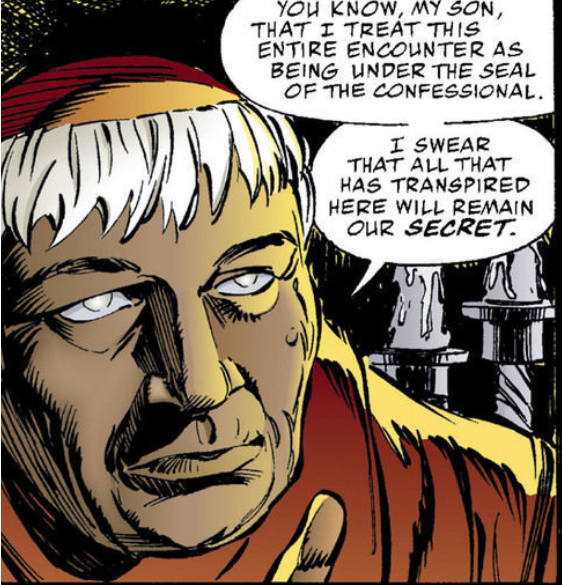 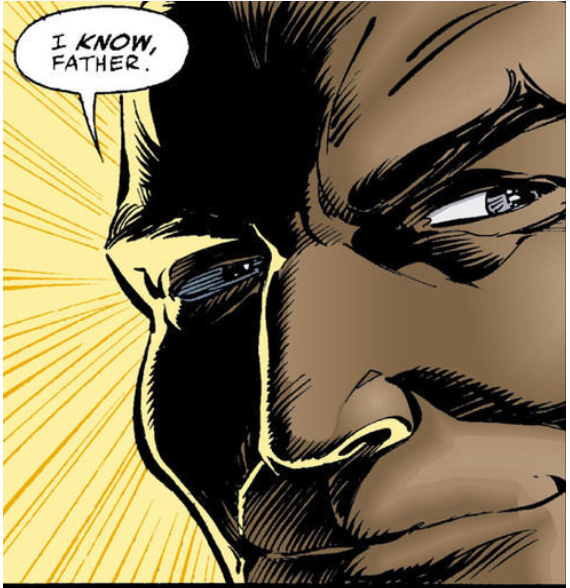 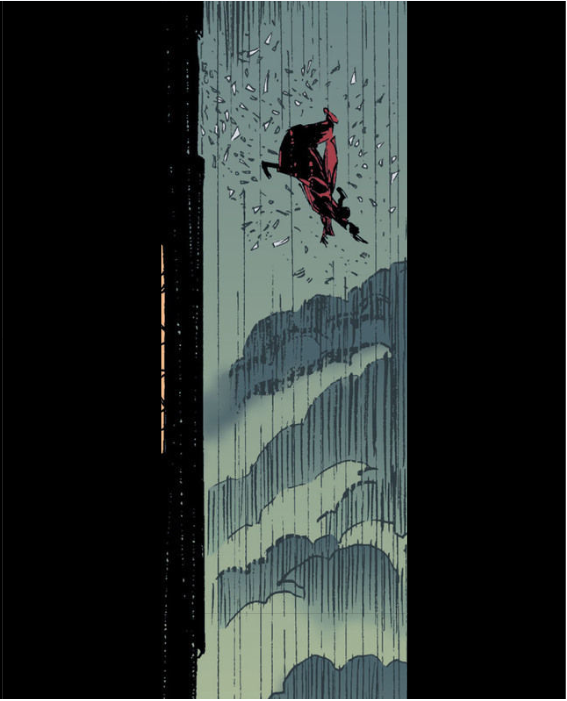 Bane pushes Father Orestes out to his death.

The ingenious {Jesuit} priest who discovered how bats “see” in the dark ~ NewScientist.com 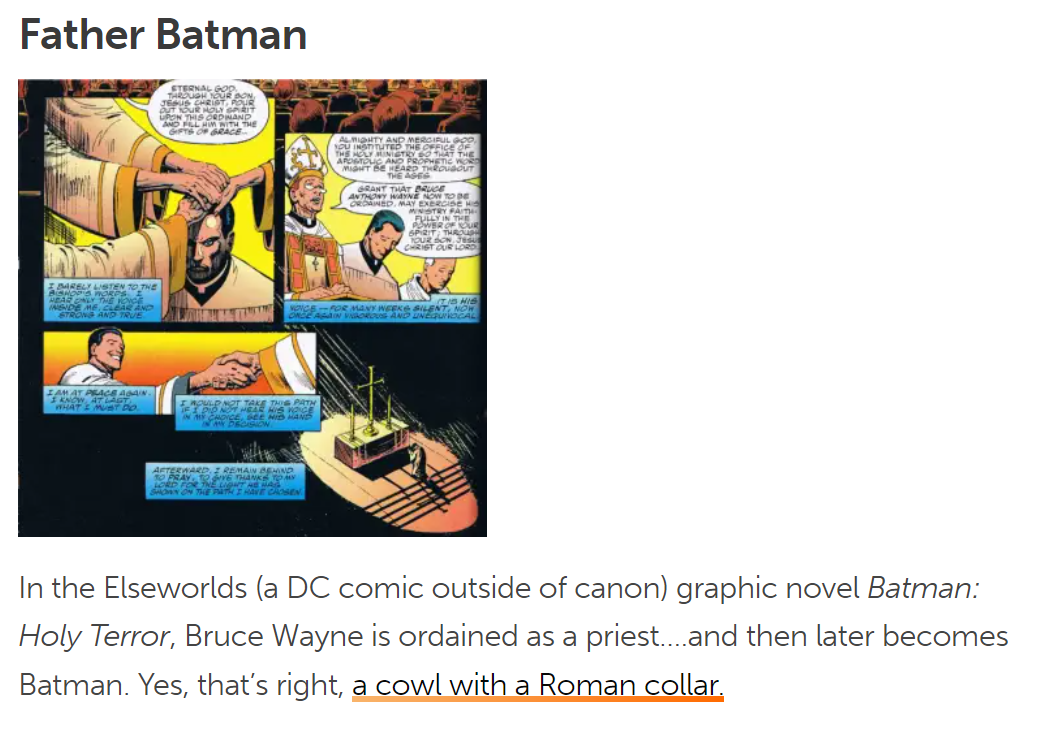 Johnny Cirucci on The Missing Link with Jesse Hal, Episode #120

Johnny Cirucci on The Missing Link with Jesse Hal, Episode #120