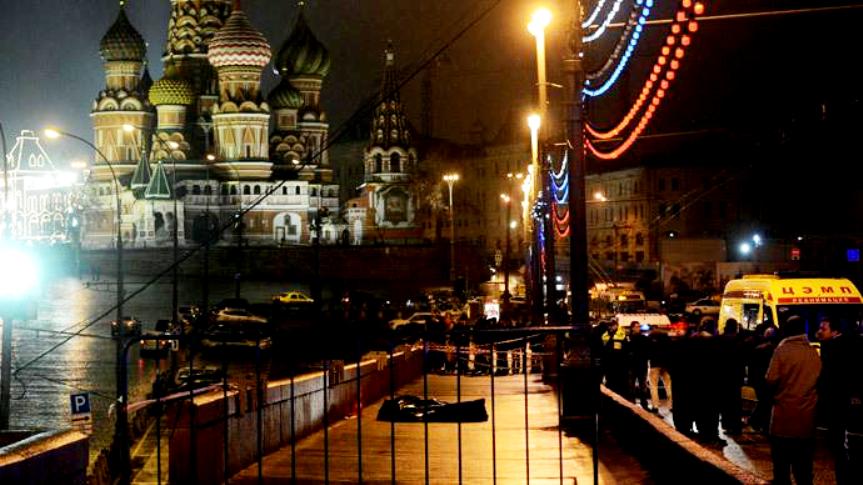 The one-time Deputy Prime Minister of Russia, Boris Yefimovich Nemtsov, was murdered on February 28th; he fell in a hail of bullets just outside the Kremlin wall in Moscow.

The Western media is headlining Nemtsov as a “Prominent Putin Critic” which is meant to immediately implicate Vladimir Putin as being behind his death.

The CIA News Network is working overtime to maximize the propaganda effect of the event, comparing Putin to Stalin:

In Moscow on February 27, 2015, a lone gunman killed Boris Nemtsov, a former deputy prime minister and a powerful and charismatic opposition leader who stood as an alternative to Vladimir Putin. In Leningrad on December 1, 1934, a lone gunman killed Sergey Kirov, a powerful Bolshevik who stood as an alternative to Josef Stalin. ~ Karen Dawisha, CNN

This is off the heels of a recent “blooper” where CNN outed Putin as “Jihadi John”.

I found this “mistake” particularly ironic given that “Jihadi John” has been created by the same people who tell CNN how to conduct their propaganda.

A Russian law-enforcement investigation hasn’t even concluded and user-edited Wikipedia already knows his killers were connected to Putin:

He was shot and killed in February 2015 for his pro-democracy views on Russia by loyalists of Vladimir Putin on a bridge near the Kremlin and Red Square in Moscow.*

Rupert Murdoch [who, as I proved in my book, appears to be the official propagandist of the Vatican] used his “Sky News” to throw all pretense of investigative journalism out the window with pure hit pieces like this:

Boris Nemtsov was shot dead a few steps away from the Kremlin in the early hours of Saturday, sending Russian society into shock.

Since Vladimir Putin’s return to the seat of power in 2012, Russians have become used to crackdowns on freedom of speech, freedom of assembly and politically motivated criminal cases against the opposition leaders and their family members.

However, such a gruesome murder of the opposition leader in the most secure area of Russia, where every movement and phone call is controlled by the president’s security service, is a completely different story.

Assassinations like this one used to happen in the volatile past, but not in modern Russia – not until today. ~ Yulia Bragina, Moscow

There are no links or citations for these wild assertions and, even in unrestrained propaganda, the truth still comes out:

Despite being a very active critic of Vladimir Putin’s regime, Mr Nemtsov wasn’t a real political threat to the president.

Even among the liberal-minded part of Russian society, he wasn’t considered as a probable presidential candidate, simply because he had already been in power in the 1990s – and lost it.

The aftermath shows conflicting images of just how popular Boris Nemtsov was or wasn’t.

Because of this, one would have to be a complete Neanderthal to think brutally murdering him would help Vladimir Putin.

—And could anything be more clumsy than a mafia-style drive-by shooting in the heart of Moscow, on the eve of an anti-Putin protest?!

At first blush, Nemtsov being labeled as a “Liberal” appears to be a good thing in a country with such a strong past of totalitarian oppression.

But what was Nemtsov “Liberal” on?

He has investigated corruption in Vladimir Putin’s personal wealth and recent contracts like the build-up for the Sochi Olypics: all fair game.

But when it comes to politics, Nemtsov is indistinguishable from the tripe coming from any Western nation.

The false flag that was the supposed Charlie Hebdo attack in Paris was Luciferian provocateuring on parade: a dying rag that printed cartoon pornography to enrage anyone of faith was propped up by more strategy of tension machinations. Read the full story here.

Was he that under-informed? Had he never seen an issue of that rag? There’s plenty of room for doubt but, at best, Nemtsov didn’t appear to be very discerning and, at worst, he was starting to show that “anti-Putin” was synonymous with “pro New World Order”.

He would later prove it by giving Western propaganda just what they were looking for on Ukraine.

Fears about his personal safety had been on Nemtsov’s mind in recent months. In an interview with the Sobesdnik.ru news site less than three weeks ago, Nemtsov admitted he was worried he could be assassinated.

“I think that it was he [Putin] who started the war in Ukraine. I think worse of him now than ever,” Nemtsov said at the time. ~ Howard Amos and David Millward, the Telegraph

The slightest cursory glance will tell you that upheaval in Ukraine was created by the West as the closing of the cage that has slowly surrounded Russia since the fall of the Soviet Union. Ukraine following all of the other Slavic and former Soviet satellite states by joining the EU and/or NATO would be the locking of the door and turning of the key.

Legitimate news and law enforcement investigators need to explore all of the possibilities to include an act of terrorism, a business deal gone bad or even a jilted lover (woman or man).

I have shown repeatedly that Vladimir Putin, and Russia, appear to be a rising thorn in the side of the New World Order.

Russia and Putin are Known by Their Enemies

Perestroika Deceived: the truth behind the Communist conspiracy.

The Western/Luciferian agents of the New World Order have repeatedly upped the ante and the pressure to either throw Putin out or force Russia into a world war.

The full story on upheaval in Ukraine.

Insurgency there is even worth another Chernobyl to the West.

MH-17 was likely another false flag push in that direction.

Even the full-force of Hollywood is behind this agenda.

Traitorous Western militaries are marching up and down the Russian border in severe provocation.

The Italian government will even jail a well-known actress just for skipping a performance to dine with Putin!!! [No one in Western media is covering this incredible story.]

Was the murder of Boris Nemtsov a vicious attempt to destabilize the Putin government right in the heart of Moscow, just outside the Kremlin?

Ironically, Putin, himself, warned of just such a provocation (false flag?) in 2012.

But this information could be what proves this theory beyond all doubt.

In 2012, former NSA analyst and intelligence insider turned whistleblower Wayne Madsen broke this story about how the world’s Elite were planning trouble for Russia. They did it via their clandestine meeting of the Bilderberg Group.

The annual secretive Bilderberg Group conference, which brings together the capitalist world’s financial, political, and media kingpins in various venues, was held this year in Chantilly, Virginia, near the back gate of Washington Dulles International Airport. The Marriott Westfields resort hotel venue allowed official and unofficial guests to make their way from the airport as clandestinely as possible, thus avoiding the large number of protesters representing both the progressive “Occupy” and conservative “Tea Party” movements who gathered at the government security perimeter erected for the “private” conference.

This year’s Bilderberg conference featured three guests from Russia. However, unlike the “establishment” figures from Western nations, including the United States, Britain, Germany, France, and Canada, two of the three Russians represented the anti-Valdimir Putin opposition. Present at Bilderberg 2012 were Anatoly Chubais and Garry Kasparov, leading anti-Putin Russian politicians. …

Kasparov, the leader of the United Civil Front of Russia, and his colleague Boris Nemtsov are leading members of the Russian opposition to Putin. McFaul has openly championed the opposition cause. Moreover, Nemtsov is an old political ally of Chubais. Chubais, Kasparov, and Nemtsov represent the “neo-liberal” political ideology that is supported by the likes of international stock and currency speculator and multi-billionaire George Soros. Neo-liberals, if they were to come to power in Russia, would transform Russia into a nation totally dependent on the dictates and whims of the financial elites of New York, London, and Frankfurt. It is apparent that given the representation of bankrupted European nations at Bilderberg 2012, Chubais and Kasparov would relish a Russia forced to impose strict austerity measures on its citizens on the orders of the global banking elites, turning Russia into another Greece, Spain, and Ireland. ~ Madsen**

The implication that a political activist and possible recipient of Western insurgency aid (if not an actual agent, himself) would be murdered within earshot of Russia’s highest leaders shows just how desperate the New World Order is getting over the rise of the Russian Federation.

But the goat on which the lot for the scapegoat fell shall be presented alive before Adonai, to make atonement upon it, to send it into the wilderness as the scapegoat. ~ Leviticus 16:8 (NASB/CJB)

If my supposition is correct, it’s clear that the Luciferian Elite have no problem sacrificing their own to achieve their sinister goals.

Not only does all Russia need to understand this, so does anyone in Western government, media or military.

* Wikipedia changes entries almost as quickly as YouTube takes down videos. This is as of 01 March 2015, 12:43 PM, EST.
** hat/tip Johnny’s man on the inside, Malachi Martin.