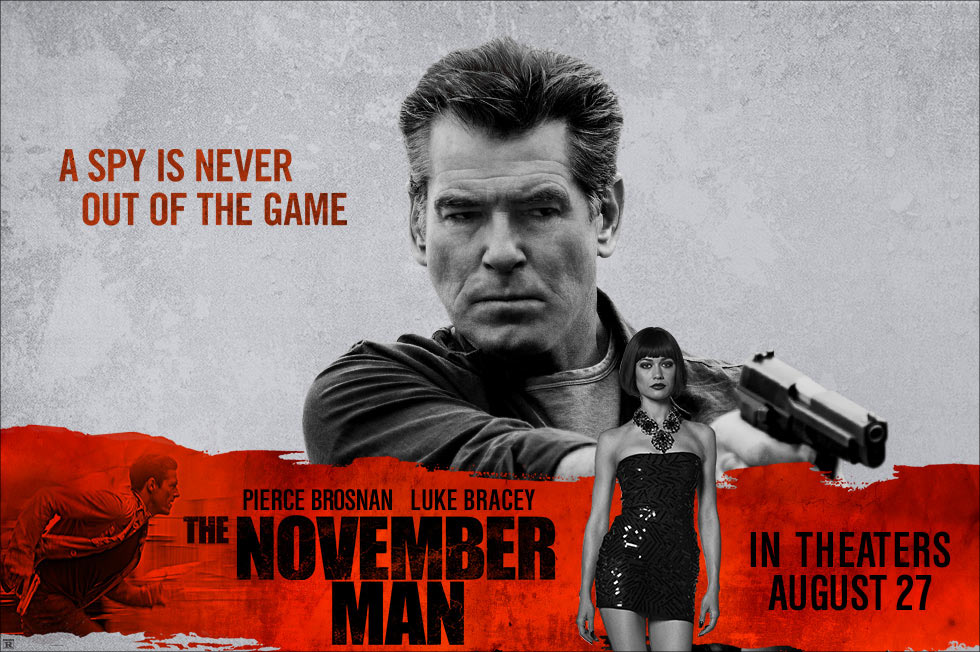 So there I was on the treadmill again, wading through the latest delivery from my rental service.

When Pierce Brosnan was selected to play James Bond through the late 90’s I vowed not to watch a single one (and I haven’t).  I couldn’t believe the idiocy of the Broccoli family (they’ve had a lock on the Bond franchise forever).  I knew I would never be able to look past the cheesy Remington Steele TV show from the 80’s (honestly, never really watched that, either).

Since then, Daniel Craig has become the best of the serious, tough portrayals of the perennial Ian Fleming character.  I will always enjoy the Sean Connery movies because I read many of the books and Connery fit the description perfectly.  He even spent time in the Royal Navy (but as an enlisted man, not a snooty officer).

Fleming was, himself, a Luciferian intelligence insider who knew that there was an organization above all of the world’s Intelligence Agencies which is why he created “SPECTRE: Special Executive for Counter-intelligence, Terrorism, Revenge and Extortion”.  To keep things safe, “SPECTRE” is adversarial, not an über Puppet Master but that’s the reality and the name of that organization is the Society of Jesus.

Apparenlty, the next Craig Bond installment will be, SPECTRE (2015).

I rented The November Man because, for me, there is one attribute that turns a Hollywood cheesball into a believable toughguy: age.

And I was desperate for something to watch on the treadmill that wouldn’t make me throw myself out the window.

Believe me, I still get them and the 2014 Schwarzenegger movie Sabotage was one!  There were so many women pretending to be men in that movie I thought about putting a dress on, then jumping out of the window.  I couldn’t even finish watching the damn thing.  —And talk about a Nazi baby-daddy New World Order Luciferian, Schwarzenegger tops the list!

If you’ve never read one of my movie reviews, let me warn you: I usually spoil the sh*t out of them because my obsessive-compulsive disorder requires I hit all the important plot themes and events.

So the movie starts with Brosnan (“Peter Devereaux”) as the mature hitman/spy schooling some annoying prettyboy junior-spy, “David Mason” played by Luke Bracey. 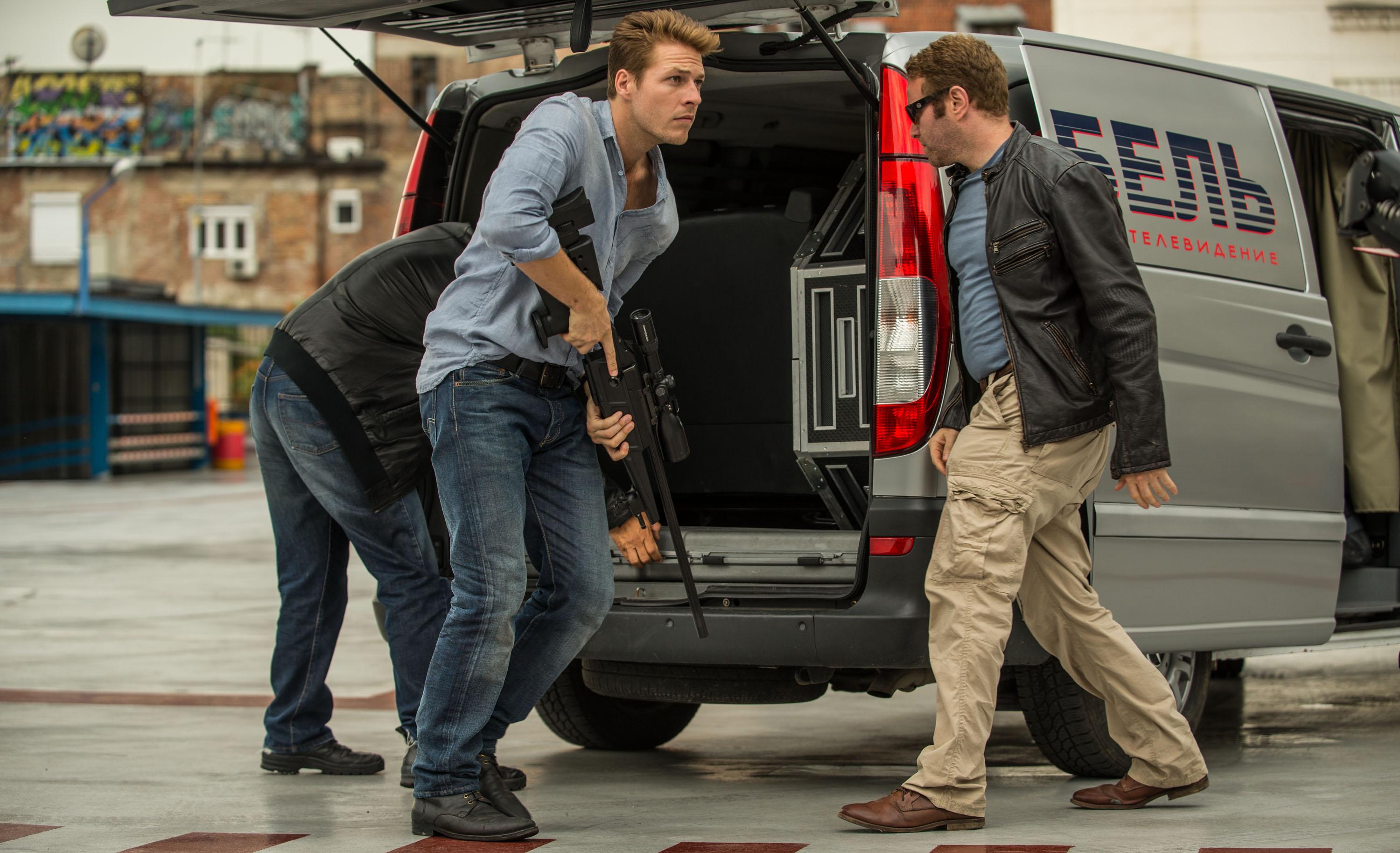 I’ve never seen Bracey in anything but he just gave me a pop culture prettyboy sense that I was annoyed with.

There’s an action scene that sets the stage for how tough and skilled the two are but there’s collateral damage which is an interesting twist.

After the scene, there’s a jump in time and the old bald guy who drove the two to their previous action scene, “John Hanley” (played by Bill Smitrovich) makes a call on Brosnan.

“The Agency” needs him to come out of semi-retirement but, of course, this is off the record.

There’s a rising star in Russia, “Arkady Federov” (Lazar Ristovski), who is going to be the next President.  He got there by corruption (of course!) and he’s using his best assassin to erase all the evidence—a skinny, odd-looking woman with a big honker. 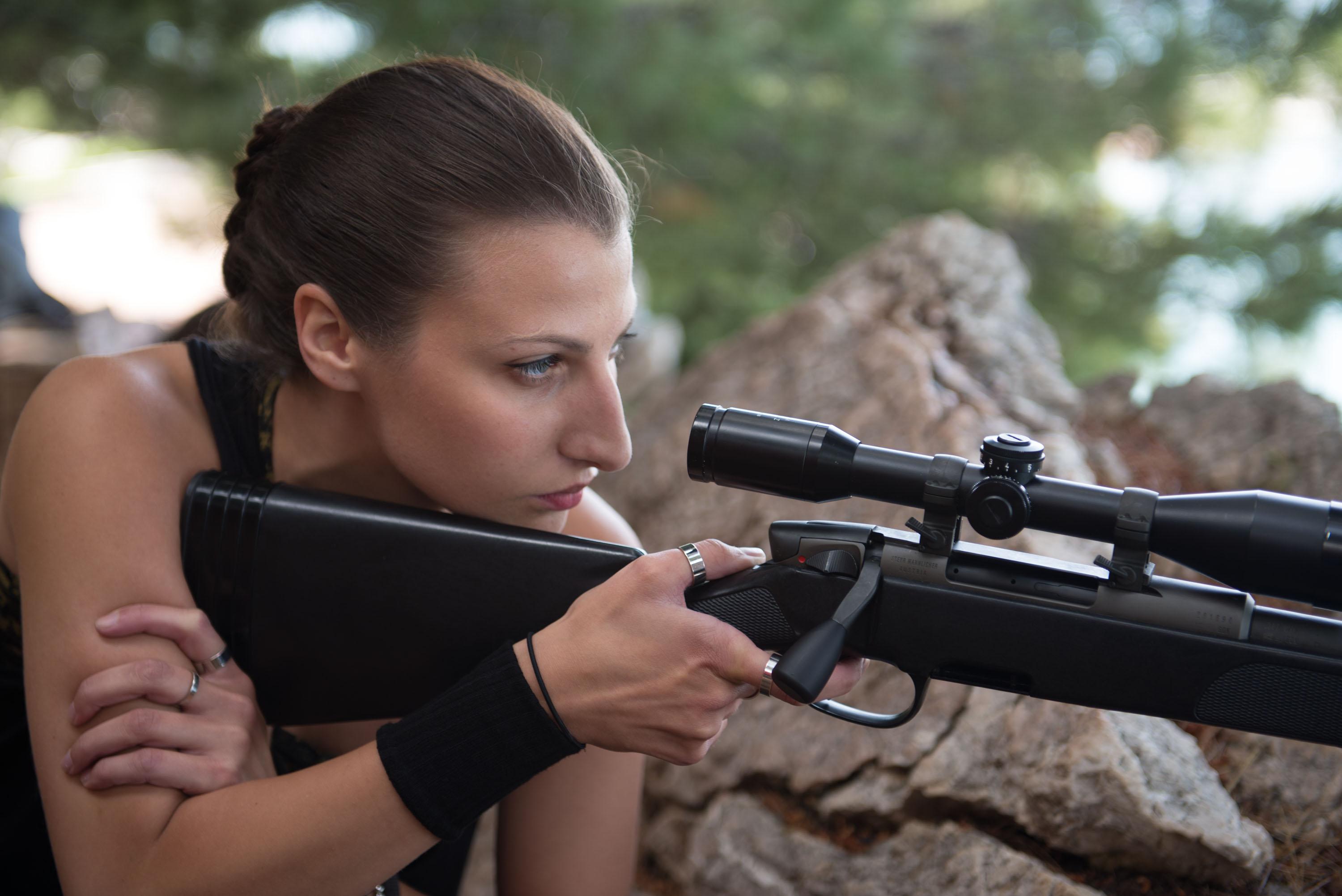 Come on, you didn’t think there’d be a Hollywood movie without a woman who can kick your ass, did you?!

She goes through the entire movie killing men left and right but the only one that lays a finger on her is another woman.

That’s the rule in Fantasy Land: women can kick your ass but even really evil women only get taken down by another woman.

My apologies to actress Amila Terzimehic for joking about her appearance, and my compliments on her ability to play the role to its teeth-grindingly obnoxious hilt.

Hanley’s got a source in Russia with a lead on an eye-witness to Federov’s crimes and it’s an old flame of “Devereaux” (“Natalia Ulanova” played by Mediha Musliovic) so he has to “bring her in”.

This was starting to look like just another Vatican/CIA propaganda hit piece to stoke the flames of war with Russia similar to Jack Ryan: Shadow Recruit and several other recent films.

So Natalia gets the identity of the witness and Devereaux grabs her just before the Russians (who are on to her) catch up.

But “the Agency” isn’t tracking Devereaux being there and uses Mason to execute Natalia, but not before she gives the intel to Devereaux.

I don’t know if I was happy with Brosnan’s acting here.  Even toughguy’s have to go through some anguish and rage when you lose someone supposedly close and they had a daughter together.

Now Devereaux has to go rogue and track down this witness (who turns out to be Olga Kurylenko) and seek vengeance against “the Agency”.

Kurylenko is hiding in plain sight, helping teen girls get free of human trafficking as she was abused as Federov’s teen sex slave.

The biggest stretch of the movie occurred when an heroic New York Times reporter (the Communist sh*trag forever stuck in the Catholic Intelligence Agency’s hip pocket) tries to get the story on the human trafficking ring.  This is disgustingly ironic as the Catholic Church and all her co-opted Intelligence Agencies (CIA, MI6, Mossad, etc.) are the premier drug pushers and child sex traffickers in the world.  In fact, whenever you see a rare arrest take place, it’s them whittling down their small-fry competition.

But the best was what Mira was privy to: Federov had risen to power after Chechen muslim insurgents bombed a building full of Russian soldiers and he rode the wave of anger into war on unpopular Chechnya.

Only, the Chechens didn’t do it, Federov did.

This is the scenario that did the same for Vladimir Putin.

In 1999, a series of apartment building bombings slammed Buinaksk, Volgodonsk and Moscow resulting in over 300 innocent Russians being murdered. 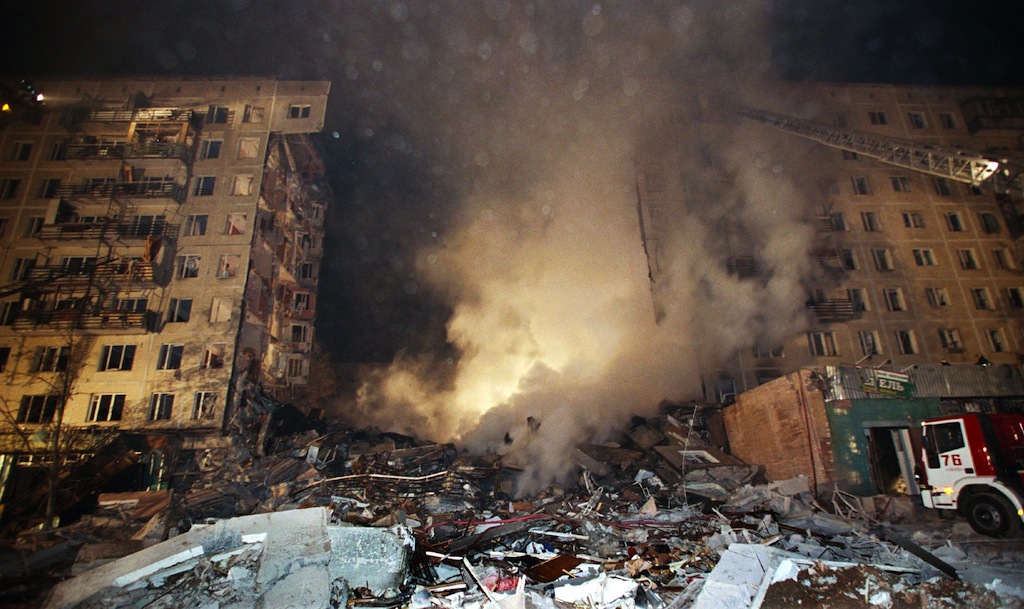 In early 1999, Putin was director of the FSB—a follow-on security agency to the KGB—appointed by Russian President Boris Yeltsin.  Yeltsin would later appoint Putin Deupty Prime Minister and then, in August, Prime Minister.  Putin was quickly approved by the Duma.

As Prime Minister, Putin vowed to hunt down and kill the terrorists even if they were found using the toilet.

Later, the FSB would be implicated as the source of these terrible false flag bombings.

There ya go, folks!  There’s this thing called a “false flag” where your own government murders you for some political achievement and them damn Ruskies pulled one to put up Putin!

If Vladimir Putin has been empowered by the blood of innocent Russians he will carry that shame to his judgment.

But the FBI and CIA, ran by the Vatican, perfected how false flags are done and they did it all on innocent Americans.

This was really shaping up to be an absolute stinker of a movie.

And then a twist occurred that I wasn’t looking for; Hanley was the guy pulling everyone’s strings.  It turned out that he helped Federov conduct the bombing to insure that a man he controlled would become president, and that’s why he killed Natalia to cover for his own crony.

Of course Hanley had to have a fabulous scene where he excoriated a “capable” agency female professional because she’s a woman.  Only badguy @ssh*les are so crass.

But after that turn of events, I…was…floored.

That is exactly how the Vatican has controlled spies and assassins in the modern era and their murder of George S. Patton is a despicable example.  They used their man, William Donovan (founder of the OSS, precursor to the CIA) to plan it out but Patton was only wounded and even began to recover.  They then called in the NKVD (precursor to the KGB) to finish him off.*

Co-operation between two supposed “rivals” to screw good citizens is a calling card of Rome and the Jesuits.

When I saw that the movie was based on a November Man series book titled There Are No Spies by Bill Granger, I knew somebody was putting out some high-quality truth in this film.

I’ve never read the book and it was published in 1987 during the Cold War so I really doubt it had this phenomenal twist in it so I’m going to credit screenplay writers Michael Finch and Karl Gajdusek as well as Director Roger Donaldson.

What else do they know about how “there are no spies”…? 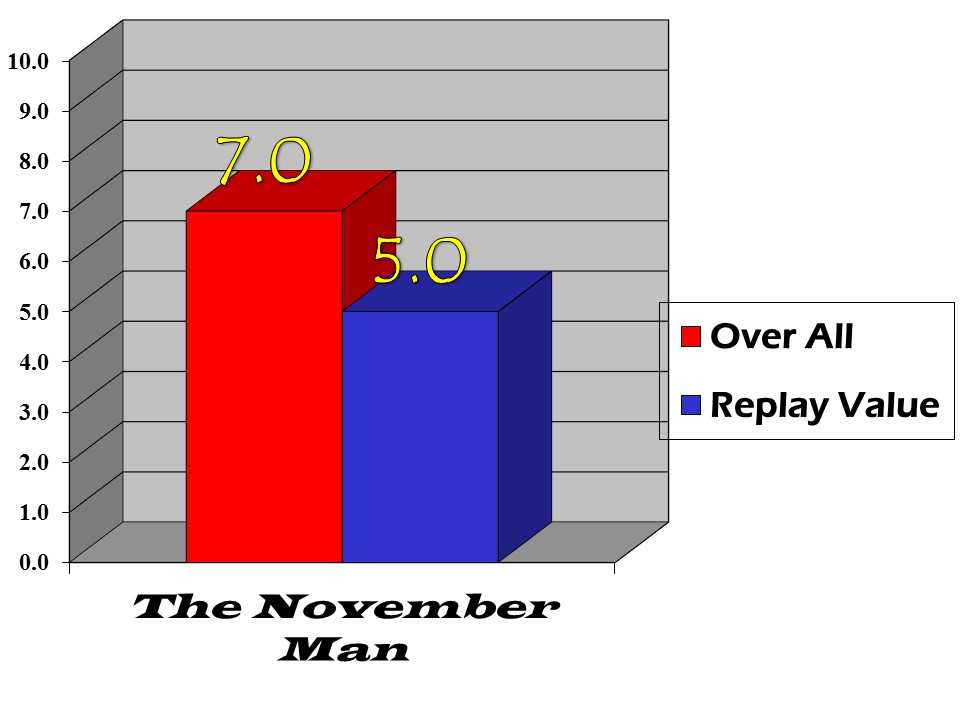 * For more on this, read Target Patton by Robert Wilcox but do not read the useless coverup on the subject by Papal propaganda puppet Bill O’Reilly.