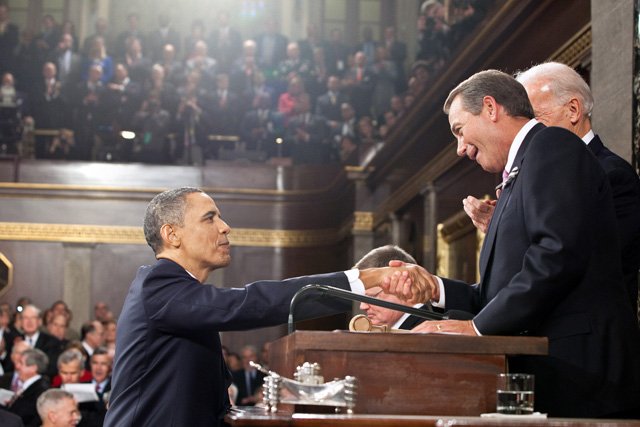 I always laugh ruefully when my frustrated friends say “Republican or Democrat, they’re all the same”. The reality is that the Democrats are at least honest about what they are doing. They tell you and they do it with vigor every chance they get. The Republicans are much more sly. They pretend to be the “opposition party”, to stand for life, liberty and property when what they really are is “just glad to be here”.

But the latest effort to further empower the most destructive man ever to sit in the highest office in the world went by with shockingly little coverage by any media what-so-ever.

Astoundingly, the bill basically abrogates much of the Senate’s Constitutional responsibility to confirm presidential apparatchik appointments.

As noted by the Heritage Foundation;

The Appointments Clause is “among the significant structural safeguards of the constitutional scheme” and “is a bulwark against one branch aggrandizing its power at the expense of another branch.”

What is consistently infuriating is that this kind of “happy bipartisanship” only runs one direction…ever. The Democrat Party would never join hands with an ideologically Right-minded Republican effort, especially one that was so damaging to all they say they stand for.

It is only the latest example in a very long list that perhaps should begin with Mr. Obama’s hapless former presidential opponent, John McCain, who was only too happy to give up the majority of George W. Bush’s judicial nominations to the Senate Democrat minority.

But such examples are legion.

No, it’s the efforts of the current Congress pushing to empower the current president that makes the blood run cold.

As Tony Perkins of the Family Research Council noted regarding the Senate’s original approval process of Barack Obama’s cabinet back in January of 2009;

Yesterday’s confirmation hearings for Secretary of State-designate Hillary Clinton and Secretary of Education-designate Arne Duncan looked more like a love fest than the vetting that is associated with confirmations. For the second day, Republicans completely failed to pressure the liberal nominees on any of the important social and family issues they’ll face in their respective departments.

One would’ve at least thought the confirmation of Hillary Clinton as Secretary of State would’ve been good for some fireworks. The former Senator who, before that held a resume that simply stated, “Bill’s wife (and bimbo buster)”, was the focus of so many scandals she could’ve kept mid-day soap plots going for a decade. But not only did the Senate shoo her in with a pat on her ample buttocks, they actually put great efforts into quelling questions.

Michelle Malkin recently noted with dour cynicism that the same Republicans who are now full of bluster and smoke to take Eric Holder’s head were only too happy to approve him for his promotion.

Other appointments and subsequent confirmations were such an affront to the American people as to rob me of my satirical wit in commenting on them.

As “Secretary of Health and Human Services” Obama appointed one of the most vicious proponents of abortion ever to hold public office (next to Barack Obama, that is)—Kathleen Sebelius—who coveted and harbored the Mengele of abortion doctors, George Tiller. The Senate was all smiles during this sick joke.

Fortunately for them, Obama’s massive shadow government was emplaced without their for-record votes. However, I’m sure that even the pro-man/boy-sex “Safe Schools Czar” Kevin Jennings still wouldn’t have been too over-the-top for the approval of his loyal “opposition” lapdogs.

How about a candidate for Supreme Court justice (Elena Kagan) who’s never been a judge, never even been inside a court room, who helped shield Saudis from lawsuits after 9/11, who lamented the loss of a “coherent socialist movement in America”, was a staunch proponent—not just of abortion—but of the infanticide known as “partial-birth” abortion and likened the National Rifle Association to the KKK? “No problemo!” says Senate Republicans!

Once the Democrats realized that they had gained the White House and both House and Senate, it was time to push like the devil for their generation-old holy grail: the socialization of 1/6th of the entire U.S. economy—a power-grab of unprecedented proportion. Not only did Republicans in the Senate walk away with a whimper, establishment Republicans in the House lead by John “Crying Game” Boehner wouldn’t touch it, either.

Americans looked to the remaining few bulldog, Red State ideologues like Tom Coburn, Republican Senator from the “guns and bibles” state of Oklahoma, to put up some level of resistance, but it was Coburn who said of Obama:

“We consider each other friends…Not friends like everybody in the Senate says, but real friends.”

Feeling had, the American people reacted in the only way they thought was acceptable: sending a wave of Tea Party Representatives into the House. All the Republicans had to do was sit and wait for the cavalry.

Instead, they donned war bonnets and rushed to help the Indians do as much damage as they could on the way out. The most egregious example being the repeal of “Don’t Ask, Don’t Tell”, the policy that kept homosexuals serving in the military, doing so, quietly. It was pure, bold-faced, radical-Left agenda. No one in the military was saying, “Gee, you know what would make us that much better at what we do…?” And the Republican establishment made it happen.

As the 2011 fiscal year came to a close, the Republican House created a firestorm by seeking to use the annual National Defense Authorization Act as an opportunity to make the “War on Terror” a permanent institution. The 2012 NDAA took the temporary war-fighting powers granted to the Executive via the Authorization for the Use of Military Force (AUMF) and made them permanent such as the indefinite detention of terror suspects without trial.

The requirement to detain a person in military custody under this section does not extend to citizens of the United States.

A person who was a part of or substantially supported al-Qaeda, the Taliban, or associated forces that are engaged in hostilities against the United States or its coalition partners, including any person who has committed a belligerent act or has directly supported such hostilities in aid of such enemy forces.

It is a shocking aggrandizement of an already terrible power especially in light of Mr. Obama’s execution of American-born Anwar al Awlaki.

In the midst of dramatic controversy over what some have considered draconian over-reach via “SOPA” and “PIPA” in the “fight against online piracy”, it was the afore-mentioned Lieberman-Collins team that sought to end-run everyone by simply handing Barack Obama an “internet kill switch” that wasn’t even subject to judicial review.

The United Nations’ “Law of the Sea Treaty” has been called a gateway to world government, yet a cabal of Republicans were gearing up to happily hand it to Barack Obama before it was killed…for now.

The amount of debt we are told politicians have racked up on behalf of every man woman and child in America has grown to treasonous levels (I think it’s fair to use that strong term because any action harmful to the survival of the nation, purposely taken, is “treason”). Here, again, the Republican Party has shown an amazing fizzle in the fire to regain fiscal responsibility before total collapse is achieved. Instead, the ever-loyal Mitch McConnell (R, KY) proposed to give Obama more authority to borrow and increase the debt to even higher staggering proportions.

In 1996, the Republican-controlled House gave Democrat Bill Clinton the power to specifically cut portions of the budget he didn’t like (I’m sure all Right-minded budget items still survived the Wrath of Willie). The Supreme Court struck that power down as an unconstitutional breach of the separation of powers. This did not slow the Republicans down who are again trying to give another hard-Left Democrat the ability to cut portions of the budget he doesn’t like. If there’s anyone I would trust in his values to keep America safe, it would be Barack Hussein Obama.

The Republican House authored a bill that veritably makes the American political class a royal Ruling Elite, around which, your Constitutional rights need not apply. The Republican establishment wants you to know that the safety, comfort and convenience of men like Barack Obama supersedes the nation’s most important document.

I guess in terms of deeds, not words, my friends are correct. Both parties are essentially the same: cancerous.