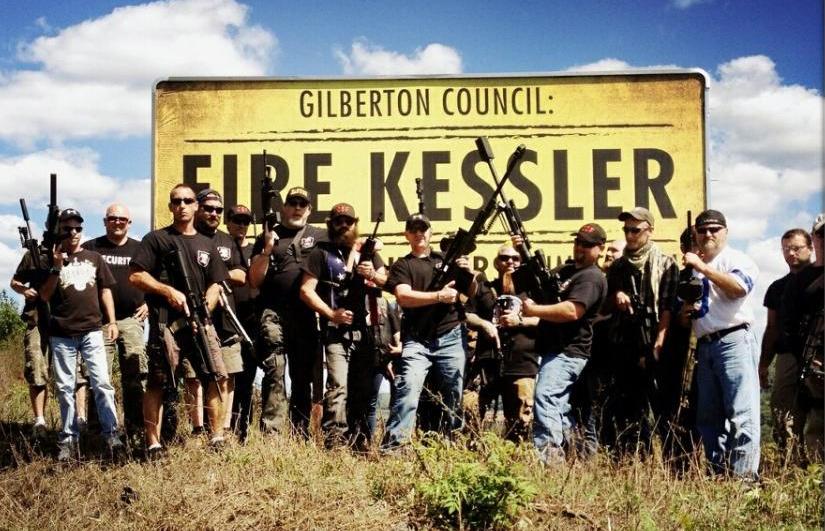 I normally leave updates at the end of a column but it is critical for the reader to know that since this was published, Mark Kessler has been embroiled in yet more controversy which finally proves that he is, at best, mentally unstable and, at worst an agent provocateur for the traitors running the United States government. For more, read the column below:

A little under 6 months ago, I wrote about a rural Pennsylvania Police Chief whom I labeled “The Most Dangerous Man In America.”

I gave Mark Kessler that moniker because I saw that he had taken work done by Constitutional Sheriffs and raised the bar. He was doing more than just stating he would not enforce illegal and/or treasonous Federal Government laws and regulations that attacked citizens’ Constitutional freedoms, he was authoring and promoting legislation to that effect as well.

Since then, a lot has happened.

The Chief has been a bit, shall we say, outspoken, in his defense of the Bill of Rights.

Sensing an overwhelming assault on the Constitution by the current administration in Washington DC, Kessler began posting some profanity-laced protest videos designed to draw attention to the direction the country is taking.

It doesn’t take much research to uncover just how right Mark Kessler was.

The Federal government now proudly proclaims the right to execute any American citizen without due process simply because a cabal of apparatchiks has decided they are a threat.

And just when you thought a drone strike on a “terrorist” in Yemen was far from the comfort of home, the FAA opens the skies to tens of thousands of drones in America.

Previously, “foreign terrorists” were interned in Guantanamo Bay without an American being the wiser to it.

But now the never-ending “War on Terror” has been used to do the same to U.S. citizens and Barack Obama’s broken promise to close Guantanamo has more than a few looking over their shoulders.

Will the terror-targeted “wild-eyed Islamists” suddenly become Christians, Constitutionalists and people who revere the Founding Fathers?

After former Marine Brandon Raub was whisked off to a mental institution for the crime of posting anti-government sentiments on Facebook, that discomfort began to turn into paranoia.

From the DEA to the NSA, government bureaucracies are watching and recording what Americans are saying to each other and collating it in a facility that’s so massive it could be out of a dystopic SciFi horror film.

America has spawned a Ruling Elite who pass power down through family lines as if they were bred to rule over us. John Dingell has been bleeding America since 1955 as a United States Congressman. He took over in 1955 via a special election from his father, John Dingell, Sr. who had been serving since 1933.

These Ruling Elites commit treasonous atrocities like murdering Americans for political gain and boldly flaunt what they have done as if daring the Sleeping Giant to do something about it.

So, it would seem, is the message sent by having Former Florida governor Jeb Bush, son of former CIA Director and former President George Herbert Walker Bush, brother of former Yale Skull & Bones inductee and former president George W. Bush give supposed political enemy Hillary Clinton a Liberty Medal from the National Constitution Center on the eve of the Benghazi anniversary, where 4 Americans lingered for 8 hours waiting for their government to save them from torture and death.

It is also the anniversary of 3,000 Americans dying at the hands of a similar Islamic foe trained at United States military facilities to fly aircraft.

Unfortunately for Chief Kessler, his videos have been virally successful.

I say “unfortunate” because his notoriety has put him at odds with the Borough Council that he is contracted through.

As you can tell from his videos, the Chief is a straight-shooter (pun intended) and will not mince words when it comes to standing up for what’s right.

In politics, that earns you a lot of enemies.

In fact, members on the Gilberton Borough Council began doing all they could to literally strong-arm support to fire Mark Kessler.

Even more shocking (and more telling as to who was watching outside of little Gilberton), a powerful anti-gun lobby group from Washington D.C. bought advertisement billboard space to lobby citizens to support his termination.

Characteristically, the Chief (along with his Constitutional Security Force posse) responded in typical Kessler fashion.

Not surprisingly, Left-leaning, Obama-supporting detractors have labeled Mark Kessler “The Scariest Man in America.” Probably because, to the gelded metrosexuals at the “New Republic”, anyone who adequately fits the description of a “man” is “scary”.

Although the Chief remains, as of this writing, suspended without salary, he expects the Borough Council to find a way—legally or illegally—to terminate his contract. In lieu of Gilberton being without a Peace Officer, Mayor Mary Lou Hannon has requested that the State Police extend coverage to the Borough.

This should be a cozy relationship, since the Chief has so many enemies amongst State Police hierarchy that they now harass his family.

But Mark Kessler has an Ace up his sleeve; he’s not done with law enforcement and is now running as a write-in candidate for Schuylkill County Sheriff. He’ll be running against incumbent Democrat Joseph G. Groody, a man with a somewhat checkered resume when it comes to the 2nd Amendment.

In a recent conversation with the Constitutionalist Constable, I quipped that it would probably be pretty tough for the Federal government to terrorize a future Sheriff Kessler’s county the way it was done in Boston earlier this year. Kessler said he had seen how authorities had used armored vehicles and SWAT personnel dressed like they were storming Fallujah and it sickened him.

When I think of what I want as one of the top law enforcement authorities in my state, the man that comes to my mind is a man who gets offered an opportunity to steal the paid-off home of a disabled Marine Corps veteran and, instead of picking up a battering ram starts calling other citizens to help him make a stand.

I honestly believe Mark Kessler is such a man…and I’d like to see him become Sheriff of Schuylkill County.