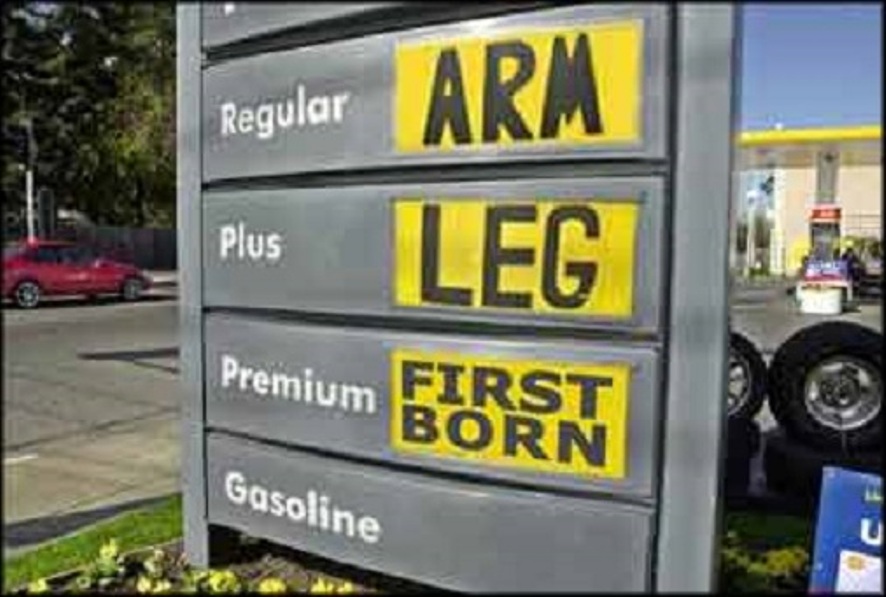 The great state of Oklahoma seems to have some of the best gas prices in the country. I still think they’re high at $1.599 a gallon. Which brings up what a screw-you-over racket oil is. I don’t for a minute believe that the moguls have no control over what the prices are from day to day. And who else could get away with pulling a cheap stunt like using a tenth of a penny in scaling (besides lawyers, doctors, mechanics and insurance salesmen)?! As if I’m too stupid to know that $1.599 is the same thing as $1.60. When someone has something you need, count on them exploiting you thoroughly for it.

So OK seems to have some of the best gas prices in the country. What do the brilliant minds in Oklahoma City decide? “—Heck, let’s bump those prices up to match the rest of the country and use that money to fix the ga-zillions of potholes all over the state.” Brilliant, boys. I get to pay more because you’re inept. The equations always work that way, politicians can’t do their jobs = I pay.

Heaven forbid you should re-adjust your budget so that you stop spending in one area to accommodate spending in another. Politicians love to spend my money. They’re like junkies. They can never get enough and they can never say “No!” to the whining open mouths in America. They love to wrest from the productive to give to the unproductive for the sake of a vote. They play the class warfare game and pretend to “take from the rich” but the “rich” aren’t stupid, they know all of the loopholes to get around government schemes. In the end, it’s the middle class that pays.

How many homes does John Kerry have? —Something like 5? And he has the nerve to pander to the envy crowd, “Those people are rich! I will take their money and give it to your children!” Right. All the subtlety of a Steven Spielberg movie.

There was a time in this country when you had to own land to vote because that insured you had a vested interest to do what was right with that vote. It couldn’t hurt to go back to that in some way.

Even the president is guilty. We made a big deal over his tax rebate. Of course it’s a great idea to give back some of the money the government siphoned off of us like some 500 lb mosquito. But a better idea would’ve been to completely re-adjust the national budget, cut out some of the millions of dollars of pork hand-outs, and just let me keep my money. Instead, it goes to the government, circulates in the bureaucracies and the president gives some back. Extremely inefficient but it makes him look like Santa Claus.

Bleeding the ProducersfuelgastaxesWar on the Middle Class