Waking Up To How Rome Plays The Right

Finding out the truth on what is really happening in the world can be tough and sometimes frustrating.  It usually starts out when you are fed up with the rabid leftists that infest practically all media channels today.  Suddenly, you are eager to hear from somebody the dissemination of some basic values, such as the importance of the traditional family, good moral and values, or owning a gun for protection.  For that reason, the first guys you usually look up to are the so called conservatives.  These are the ones who will get you fixated on some issues like gay marriage, illegal immigration, or drug abuse.  Sadly, the cause of these problems are hardly addressed and you are always prompted to hate the puppet and not the puppet master as a real conservitard.  Strange enough, most of the time they fall short when facing the other side in the most critical issues.  If you decide to go beyond to find out what power is behind all evil, there are plenty of alternative media outlets that might help with that.  However, most of the time you will end up chasing Zionists, Illuminatis, Communists or Free-Masons.  The trail always gets cold prior to the real culprits: Rome and most prominently her special forces, the Jesuits.

I myself was a proud conservitard that would blindly follow Olavo de Carvalho, a Brazilian rightwing pundit.  Olavo does a great job on fighting the Socialists in South America as being one of the first to expose the Sao Paulo Forum, a supranational Organization that joins South American leftist parties and criminal organizations, such as FARC.  His most recent debate with Alexandr Dugin (Putin’s brain) is another evidence of his stand against Communism.  However, what I did not take in account at the time was his blind allegiance to Rome as a fanatic Catholic and acquaintance with members of Opus Dei and Free-Masonry evidenced by one of his latest Hangouts (maçons = free-masons).  Olavo writes on his personal website (translated):

Nothing I said about omission and cowardice could apply to, let’s say, the American Opus Dei which is one of the most active fronts of the culture war in defense of Christianity, much less to the originary Spanish branch of the same entity, whose intense and fruitful political activity is accounted by eminent historian Ricardo de la Cierva in the indispensable book Las Puertas del Infierno.  La Historia de la Iglesia Jamás Contada (Barcelona, Fénix, 1995, pp. 567-587). ~ olavodecarvalho.org

That explains why the words “Jesuit” or “Vatican” never comes up (and never will) when he exposes the NWO; instead Rockefellers, Rothschilds, CFR, Bilderberg, among others are given out as the top of the pyramid.

In Brazil, being an outspoken Catholic conservative person is the norm, not the exception.  Roman Catholicism is wide spread in South America as I come to believe that’s nothing more than a Jesuit playground. Communism was perfected there during their Missions and, of course, since I was a little kid at school I learn how great the Jesuits were in instructing the native people.  During the time I was there I never heard or seen anything that remotely pointed the finger to the Vatican.  In fact, to this date I was only able to find a single Brazilian YouTube channel exposing the Whore of Babylon.  Unfortunately, a collaboration could not be established so far.

Sometimes it’s hard to find a direct link between some US conservative “truther” groups or individuals to the Vatican.  That’s not the case of American conservative political activist Alan Lee Keyes as he’s already clearly stated his Roman Catholicism devotion.  Despite of that, he has taken a strong position against false affirmative actions towards minorities, the gay agenda and abortion. He has even advocated the abolishing of the income tax, calling for the dissolution of the Internal Revenue Service.  Nevertheless, we may not forget that being a Roman Catholic means that your ultimate allegiance lies with Rome, no matter at what cost.  It’s is interesting to note that Keyes is not only a traditional Catholic, but also a third-degree Knight of Columbus, which is never a good sign as the objective of these secret societies is nothing more than covertly aid the Vatican to attain world domination.  Keyes was also awarded by the Prime Minister Ariel Sharon for his strong advocacy of Israel on his MSNBC show “Alan Keyes is making sense”.  As we know, such position is a powerful Jesuit weapon to stir emotions regarding the “promised land”.  The show also featured scandals on sex abuse by Catholic church priests, which in my opinion, may better explain why it was ultimately canceled.  Keyes is a good friend of Olavo de Carvalho, having even met with him and Alejandro Peña Esclusa, a right-wing Venezuelan politician, in Washington DC for a friendly talk.  Curiously, Peña Esclusa was accused by the Venezuelan government to be the head of a plot that intended to assassinate Pope John Paul II during his visit to Venezuela in 1984.

We now turn our attention to another renown conservative: Ted Nugent.  It’s easy to get pretty excited when watching Nugent arguments in defense of the 2nd Amendment.  However, his support for Donald Trump and even Jeb Bush is becoming harder to assimilate, especially for us who are past the left/right paradigm.  Trump’s family ties to the Jesuits and Bush’s Skull&Bones Nazi crime legacy speak for themselves.  Based on that, you are most inclined to take Nugent as just one more conservitard who simply does not know any better.  A closer look on his religion and education backgrounds may indicate that it’s not the case as Wikipedia says:

Nugent was born in Redford, Michigan.  He moved to Palatine, Illinois as a teenager, and has two brothers: John and Jeffrey, and a sister, Kathy.  Raised Catholic, Nugent has mentioned his ties with Catholicism many times during interviews, and has stated that he regularly attends church.  He attended William Fremd High School in Palatine, Illinois, then transferred after his freshman year to St. Viator High School in Arlington Heights, Illinois. ~ Wikipedia 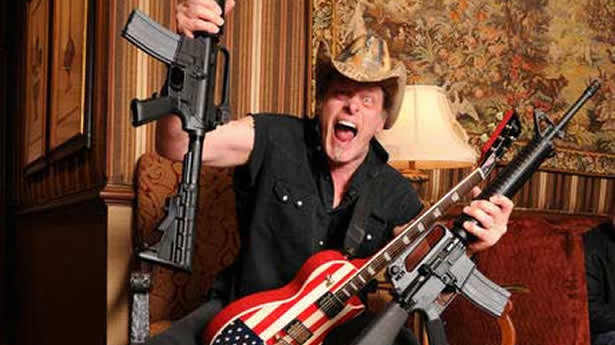 Now all of a sudden his buffoonish mannerisms as a right-wing political activist and singer makes a lot more sense: It’s designed to mock his own followers by identifying them with his traits and causing embarrassment due to his “controversial” comments.

Perhaps you may think that attending the church nowadays means you’re somewhat more enlighten than the average gentile.  It’s better you think again.  Many of the so called conservative evangelical Christian pastors are at best totally alienated, or at worst preaching toxic Jesuit doctrines to further endanger their flock souls.  Dr.  David Jeremiah, the senior pastor of Shadow Community Church in San Diego, California might just be doing that.  Jeremiah, as many others of his likeness, consistently promotes the sin of worshipping the Land of Israel instead of the God of Israel.  His use of Genesis 12:3 to justify any US political and/or economic aid to that land only inspires the worship of Jerusalem, supposedly the chosen nation, and excessive emotional display over the always intricate Jew/Muslim issues of that region.  Nevertheless, he continues to push this agenda by organizing a yearly tour to the “holy land”.  And guess what? You also have the option to take a pre-tour to Rome because, of course, there is where all true protestant Christian would like to visit.

Furthermore, Jeremiah associations may definitely confirm the fraud he is.  Several of his books were actually written by Carole C.  Carlson, a lesbian feminist pastor.  He was also asked by Roma Downey and Mark Burnett, the married couple behind The Son of God movie, to write a companion book on Acts that would follow their NBC tv show A.D. The Revolution Continues.  Roma Downey is a devout Roman Catholic with a Master’s Degree in spiritual psychology from the University of Santa Monica, a New Age college.  More recently, you can spot Jeremiah’s name composing Donald Trump’s evangelical executive advisory board together with other equally fraudulent people, not to mention Kenneth Copeland and his prosperity ministry.

Perhaps it’s safe to assume that virtually every conservative right-wing politician, religious leader, or activist in the spotlight is used to some extent by the Vatican and his agents.  By applying learning against learning and mixing truth with lies, tactics that I was just acquitted to recently, the Jesuits control both sides of the spectrum of ideas.  The leftists always go on full power when it comes to implement their agenda, while the conservitards try to retard their advance, never really stopping it.  It’s my conviction that the latter will have a harsher judgement than the former coming their way.  Eventually, it’s up to you to decide whether someone is worthy of your trust, but even if he’s not, it’s wise to know how to attain good information and get rid of the crap.  After all, it’s the job of papal frauds to give you at least 51% of truth.