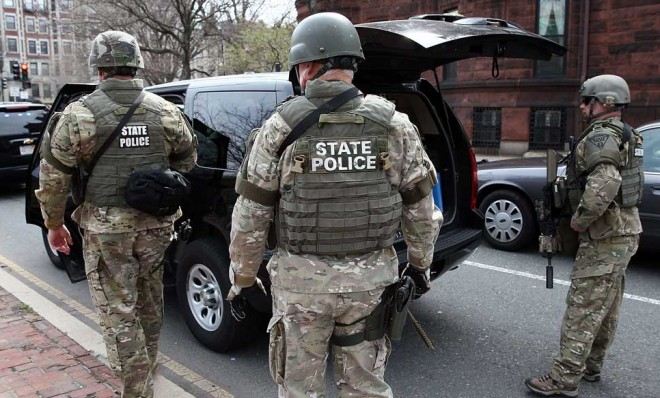 The immortal words of President Dwight D. Eisenhower during his Farewell Address have become the rallying cry for awakened Americans sick of being drained by war.

After over a decade, citizens of the United States have nothing to show from their participation in the “War on Terror” except lighter wallets, horrifying humiliation at the airport terminal…and sons without arms, legs and faces. Many are left with no son at all.

But an increasingly-oppressive corporatized government has been reaping massive rewards in the science of population control. 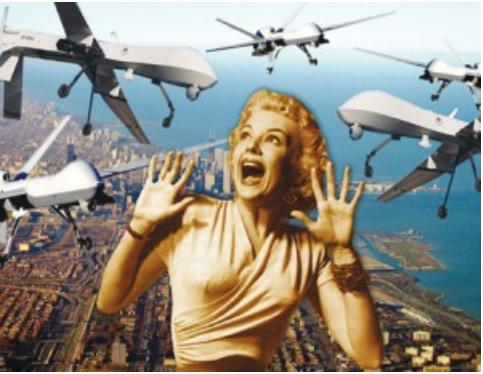 “Drones” (known in the military as “Unmanned Arial Vehicles” or “UAVs”) are easily dealt with by determined nation-states. Russian-equipped Iranians downing a top secret U.S. Stealth drone towards the end of 2011, bears this out. It was a drone overloaded with the best in American military technology and Barack Obama gifted it to them.

Even modestly-knowledgeable and little-funded operations like those of the University of Texas can hijack a flying robot.

But for the common citizen, a drone can be a terrifying eavesdropper (and remote killer) and their use in the continental United States is now an Orwellian fact.

Some of the personalities engineering this new age of death from above are right out of a science fiction movie.

Fast forward to 1 minute in of this promotional video where iRobot managing director Joe Dyer calls the drones and systems he sends into the field his “children” —then corrects himself.

Feeding the government war machine is so lucrative and so vast that contractors have their own contractor to help them land that big contract.

One such “source for competitive solutions” (always need the term “solutions” in your business catch-phrase) is the firm “Washington Technology”. They put out an interesting article explaining the latest push in citizen identification: “biometrics”.

As the Global War on Terrorism (GWOT) drives an ever-increasing demand for effective identification technology, biometric systems are being used to deliver these capabilities to the battlefield.

Biometric data includes measurable physical or behavioral characteristics used to uniquely identify an individual, such as handwritten signatures, iris scans, fingerprints, facial recognition, voice recognition, thermal signatures and DNA samples. The value of biometric systems lies in their ability to reliably and consistently identify an individual – thereby denying a terrorist or enemy the power of anonymity. To date, more than 16,000 individuals have been placed on the Department of Defense (DoD) Biometrics Watchlist (a list of identities of interest to the Department), including more than 1,800 high value targets; more than 1,600 insurgents have been placed on “security hold” – significant milestones in force protection.

The military has now amassed extensive knowledge in the use of biometrics as well as built a staggering database of “terrorists”. Ellen Messmer of Network World noted:

When it comes to biometrics, the U.S. Department of Defense has gained vast experience during the wars in Iraq and Afghanistan, where the military has captured millions of fingerprints, facial images and iris scans in order to identify and collect details about terrorists and dangerous insurgents.

…Suspects are tracked down based on fingerprints found on exploded bomb fragments, for instance, that are matched against a database in the United States in less than three minutes using satellite communications.

…The Department of Defense is … eager to expand its biometrics efforts into new areas that include DNA, as well as what’s called “multi-modal biometrics” that fuse various types, like fingerprint or iris, in order to obtain a more perfect match on subjects.

The science of biometrics “strips away the ambiguity of a person’s identity,” said Dr. Myra Gray, director of the Biometrics Task Force. In “high-target tracking,” biometrics is a tool that will “deny anonymity to adversaries” and is now being used in Iraq and Afghanistan on detainees and suspected terrorists, Gray told attendees at the Biometric Consortium Conference going on in Tampa this week.

All of this sounds really patriotic and inspiring…until you start redefining just who a “terrorist” is.

In 2009, then Homeland Security Secretary Janet Napolitano put out a report which stated you, Patriotic Americans, were the next “terror threat”; Pro Lifers, Christians, Libertarians, Tea Partiers and veterans returning from war. It is your face they wish to scan and record, and they’re doing it now.

The UK has been the premier test bed for the Surveillance State and now, even grocery chains are getting in on the action with facial recognition scanners mapping customers who just need their milk and bread.

In San Diego County, California, police are now cataloging anyone they arrest via biometrics and a new “Tactical Identification System”. Your permission is neither wanted nor asked.

The local Bay Area NBC affiliate reported the story with this headline:

The quick and quiet roll-out of battlefield technology in the hands of local law enforcement has more than a few rattled;

The use of this technology was rolled out without any public hearings or notice. The secrecy of the program has alarmed privacy experts and raised questions about whether San Diego is the leading edge of an alarming future – one in which few people escape cataloging in a government database.

Perhaps, you’re thinking, “Don’t get arrested” and everything will be OK.

In Texas, random citizens are corralled and intimidated into participating in a Federal “DNA screening” where they are asked to give saliva or blood.

The local Dallas/Ft. Worth news channel seemed to have some trouble getting details from either the contractor or the government:

NBC DFW confirmed that the survey was done by a government contractor, the Pacific Institute for Research and Evaluation, which is based in Calverton, Md.

An agency spokeswoman sent an email confirming the government is conducting the surveys in 30 cities across the country in an effort to reduce impaired-driving accidents.

She did not respond to another email from NBC DFW asking specific questions about the program.

DNA is a powerful, personal signature. It is all too easy to contrive a story about testing for impaired drivers as a ruse to have access to a citizen’s blood or saliva.

In Tennessee, drivers stopped at “check points” don’t get asked.

It’s bad enough to see militarized police at such a “check point” but when you add a soldier into the mix, you get that twisting sensation in the pit of your stomach.

Federal, state and local governments try to put you at ease (or acclimate you?) by using National Guard soldiers instead of Active Duty. This gives the appearance of adhering to the 1878 Posse Comitatus Act which restricts the use of full-time military for domestic operations.

However, those same Guardsmen have been slowly assimilated into a Federal force structure via some disturbing precedents.

Many of us have seen the toll long deployments have taken on the National Guard serving in Iraq and Afghanistan. You have to stretch “citizen safety” pretty far to defend sending part-time Guardsmen to participate in the “War on Terror”.

But you may not know that the “state militias” have extended their reach far beyond the Middle East.

* The New Jersey National Guard has deployed to Botswana.

* The South Carolina National Guard recently deployed in support of Bill Clinton’s war in Kosovo (yes, there are still rotations to Kosovo, Bosnia and Serbia, all invisible to the mainstream media).

* The Tennessee National Guard is “partnering” with Uganda.

* Two years after Lithuania declared her independence, she partnered with American military: the Pennsylvania National Guard.

* A Missouri National Guardsman was killed in Guatemala.

The Guard is stretched so thin bouncing all over the world that, when they’re needed at home, they aren’t there.

The culmination of this migration has been centralizing the National Guard and giving the Guard’s highest-ranking officer a seat on the Active Duty Joint Chiefs of Staff. It is a move that left James Joyner of Outside the Beltway baffled:

In a move that makes no sense whatsoever, Air National Guard General Craig McKinley has become a member of the Joint Chiefs of Staff. …

The National Guard Bureau’s top officer is now a member of the Joint Chiefs of Staff. A provision in the 2012 National Defense Authorization Act, signed into law Dec. 31 by President Obama, adds the Guard leader to the nation’s highest military advisory group.

The Joint Chiefs of Staff advises the president on national security matters.

Its members voiced firm opposition during a hearing on Capitol Hill in November as lawmakers pushed to create a seat for the Guard.

During the Nov. 10 hearing of the Senate Armed Services Committee, the six four-star generals voiced opposition to the proposal, saying it would create needless confusion and reduce their authority.

“There is no compelling military need for this change,” Army Gen. Martin Dempsey, chairman of the Joint Chiefs, said at the time. …

So, the entire Joint Chiefs and the Secretary of Defense opposed this move and yet it was made anyway? Why?

—Baffled, unless you have plans for those National Guard soldiers to carry out an important Presidential mission.