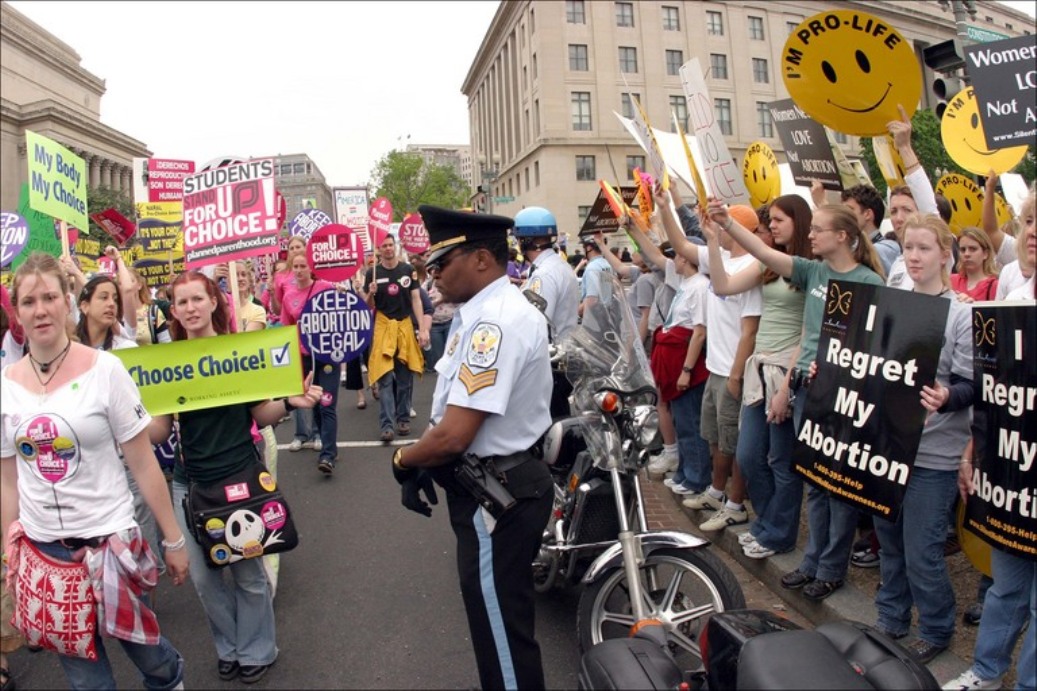 What a way to spend our L-rd’s Sabbath—screaming and cackling in the most obnoxious fashion over the “right” to murder your unborn child.

Such was the “rally” today in Washington DC.

What terrible judgment awaits those who have taken the precious innocents—their own flesh and blood—and torn them limb from limb out of their selfish love of licentious promiscuity or warped sense of “freedom.”

And worse, for those that knew what they were doing and encouraged or facilitated the death of those tiny lives. Know this:

…judgment is without mercy to the one who has shown no mercy. ~ James 2:13, NKJV

What depraved society rips the arms off of babies and lets rapists and murders live and often go free?! Heaven forbid the government should threaten a woman’s ability to have sex without consequences.

Make no mistake. We will be held accountable for what we have done:

Then Jesus said to His disciples, “If anyone desires to come after Me, let him deny himself, and take up his cross, and follow Me. For whoever desires to save his life will lose it, but whoever loses his life for My Sake will find it. For what profit is it to a man if he gains the whole world, and loses his own soul? Or what will a man give in exchange for his soul? For the Son of Man will come in the Glory of His Father with His Angels, and then He will reward each according to his works.” ~ Matthew 16:24-27, NKJV (emphasis added)

Especially when you stand before the Judgment Seat without the Blood of Christ covering you:

Women who fight for abortion—you are the victim! Victims of men who use you and are then only too happy to have you eradicate your own child to free them from responsibility.

You will be judged just as harshly as the Canaanites who threw their children into bonfires to worship demons:

“‘And they built the high places of Baal which are in the Valley of the Son of Hinnom, to cause their sons and their daughters to pass through the fire to Molech, which I did not command them, nor did it come into My Mind that they should do this abomination, to cause Judah to sin.’” ~ Jeremiah 32:35, NKJV

Satan laughs at the women who champion such perversity. Groups that claim to be “advocates” for women are, in fact, the instruments by which irreconcilable damage is done to them.

One of the biggest clowns at the rally was actress/comedian Whoopi Goldberg. She had this gem to shriek out:

“…what God has given you, let no man tear asunder, child! God gave us freedom of choice, they say that’s what elevates us above the animals…”

How satan loves to warp that which is the most sacred (and to use the most ignorant of pawns to do it). To stand up in front of a group of people, advocating something as despicable as abortion, then have the nerve to quote Scripture (completely out of context and wrong) and use His Name in support of something He thinks is abominable takes a special kind of in-your-face perversion.

The amazing thing is that it’s been done before…and condemned before:

Destruction is certain for those who drag their sins behind them, tied with cords of falsehood [as if to say “We are proud of our wickedness and want the whole world to see!”]. They even mock the Holy One of Israel and say, “Hurry up and do something! Quick, show us what You can do. We want to see what You have planned.” ~ Isaiah 5:18-19, NLT

Across thousands of years, the judgment for those then, and these now, will all be the same:

“The Son of Man will send out His Angels, and they will gather out of His Kingdom all things that offend, and those who practice lawlessness, and will cast them into the Furnace of Fire. There will be wailing and gnashing of teeth. Then the Righteous will shine forth as the sun in the Kingdom of their Father. He who has ears to hear, let him hear!” ~ Matthew 13:41-43, NKJV