If you ever needed proof that “the Jews!” don’t control the media, it just passed on Tuesday after nearly 70 years of fulfilling the Jesuit agenda of lies, disinformation and propaganda.

John McLaughlin died on August 16th, 2016, at 89 years of age after almost two decades as a television media pundit—most notably for the show he hosted titled “The McLaughlin Group”.

But more than that, McLaughlin was a key player in politics, as well, having unsuccessfully run for United States Senate as a Jesuit priest.  Why not?  His Jesuit brother, pro-abortion priest Robert Drinan became an anti-Vietnam Leftist Democrat Congressman for Massachusetts from 1971 to 1981—and never took his collar off.

America has come a sad, long way from her founding where Roman Catholic citizens (not to mention clergy) were barred from the vote because American Protestants remembered all too well the Papal tyranny and persecution they had run from in Europe.

McLaughlin would’ve been the perfect pro-Vietnam foil for his brother, just as the blood oath they both took swore them to be:

You have been taught to plant insidiously the seeds of jealousy and hatred between communities, provinces, states that were at peace, and to incite them to deeds of blood, involving them in war with each other, and to create revolutions and civil wars in countries that were independent and prosperous, cultivating the arts and the sciences and enjoying the blessings of peace; to take sides with the combatants and to act secretly with your brother Jesuit, who might be engaged on the other side, but openly opposed to that with which you might be connected, only that the Church might be the gainer in the end, in the conditions fixed in the treaties for peace and that the end justifies the means. 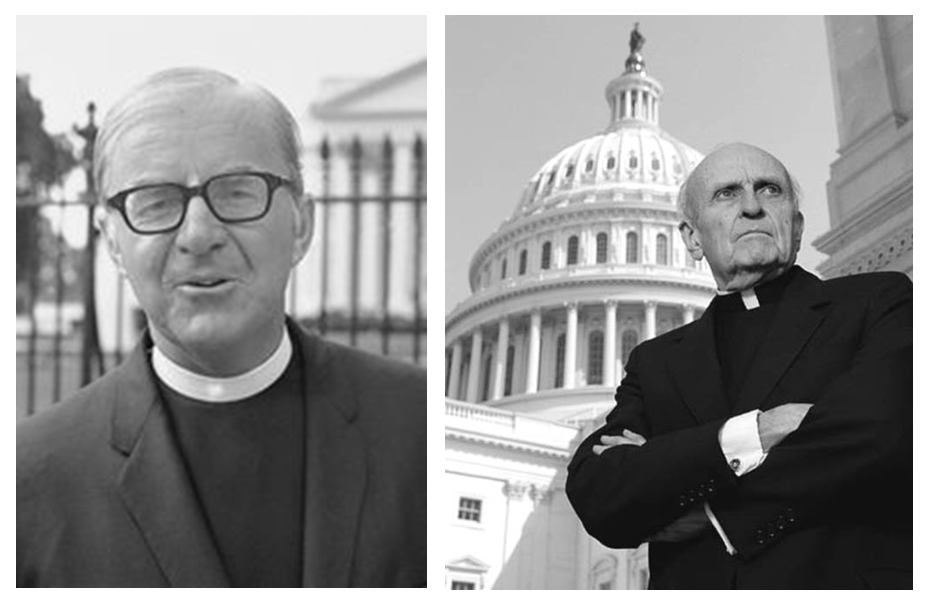 Instead, McLaughlin became the Jesuit who put words in the mouth of their minion, Richard Milhous Nixon.

The Jesuits have always been telling their American puppets what to say.

The Teleprompter In Chief

Although Americans have no idea who Barack Obama is, it is clear that he is heavily controlled by powers beyond him.

Obama is so controlled, he is required to speak from a teleprompter even when he is before a classroom of 6th grade children, as was the case in Falls Church, VA in January of 2010.

Even Left-wing comic Jonathan Leibowitz (more popularly known as “Jon Stewart”) couldn’t pass up the opportunity to lampoon this event574, but the idea that Obama is handled from a higher power just as, if not more malignant towards America than he is, is no laughing matter.

Who is telling Obama what to say?

Favreau started his political career via an internship with Skull and Bones alum John Kerry while attending Jesuit Holy Cross.

From there, his Leftist ideology passed the test for the Society of Jesus and he was given to Barack Obama…

[Chris] Matthews is one of the most well-known vitriolic Leftists in mainstream media.

What isn’t as well known is that he had a special Catholic education starting with Jesuit La Salle College High School and then on to Jesuit Holy Cross.  He has an honorary degree from Jesuit Fordham, as well.892

He was cultivated by the premier Catholic Leftist of his day, Thomas P. “Tip” O’Neill. Matthews was his top aide.  O’Neill held his protected seat in Congress for thirty four years—ten of those as Speaker of the House of Representatives.

O’Neill was a graduate of Jesuit-run Boston College.893

As Jesuit-trained Jon Favreau would tell Barack Obama what to say in his speeches, Chris Matthews would do the same for President Jimmy Carter.894 ~ Illuminati Unmasked 1

Good ole radical Catholic Leftist “Tip” O’Neill was a late-night drinking buddy with “Conservative Patriot” Ronald Wilson Reagan.  Matthews enjoyed manipulating it so much, he wrote a book to brag about it; Tip and the Gipper.

“Conservative Patriot” Ronald Reagan is one of the best propaganda efforts America has ever seen; gun control, higher taxes, legalized illegal aliens, bigger government—Reagan did it all.

Understanding that the Jesuits created both Nazi fascism and Communism, if we take away “taking down the wall”, the Presidency of Ronald Reagan was little different than his Leftist predecessor Jimmy Carter.

What did Reagan do to deserve the re-write of history?

He reunited America with her puppeteer.

In investigating the assassination of Abraham Lincoln, so many ties were found to the Vatican that the United States severed relations with the “sovereign entity” in 1867.  The man to change that in late 1983 was Ronald Reagan.  …it was his administration that signaled the complete control of America by “the Unseen Hand”.

THE PHALLUS OF OSIRIS

It is, indeed, an historical fact that on January 20th , 1981, Ronald Wilson Reagan was the first President of the United States to conduct his inauguration on the west front of the Capitol instead of the east front.  As [ex-Jesuit priest] Alberto Rivera predicted, he was facing the Washington Monument. ~ Illuminati DEFEATED, Johnny Cirucci.com

Few know that Reagan was raised by a Catholic father and he openly practiced Catholicism as a late teen.

Even those that buy into the lie of the “Cold War” admit that Ronald Reagan was absolutely surrounded (and controlled) by Roman Catholics—most of them either Jesuit-trained or Jesuits, themselves!

Most vital was William Clark, who replaced Allen.  Clark supervised and implemented the formal National Security Decision Directives crucial to confronting the Soviet empire.  A student of Aquinas, Fulton Sheen and Thomas Merton, who as a young man attended an Augustinian novitiate in upstate New York, Clark was dubbed Reagan’s “most impressive” and “most important and influential” adviser by official biographer Edmund Morris.  Morris rightly discerned that no other person was as close to the president spiritually.  Clark and Reagan prayed together, particularly the Prayer of St. Francis.

Also notable, given Reagan’s moniker “the Great Communicator,” was the contribution of Catholic speechwriters, such as Peter Robinson, who wrote the Brandenburg Gate speech, Peggy Noonan, author of the Challenger remarks, and chief speechwriter Tony Dolan, who penned Reagan’s most memorable foreign policy addresses.

Then there were Reagan’s poignant relationships with high-profile Catholics such as Terence Cardinal Cooke, Mother Teresa and, of course, Pope John Paul II.  To all three, Reagan confided that he believed God had spared his life during the March 1981 assassination attempt for the purpose of taking down Soviet communism.  He and John Paul II were jointly committed to that historic endeavor. ~ USA Today

Reagan was part of the same game Rome plays on us today: pseudo-Right and rabid Left.

Writing the script on the one side was Chris Matthews for “Tip” O’Neill.  On the Reagan side of the Hegelian dialectic was Patrick Joseph Buchanan.  Buchanan was Reagan’s Communications Director, having first been trained at Blessed Sacrament Grammar School, Jesuit-run Gonzaga College High School, and then Jesuit-run Georgetown University.

Each one of these personalities would leave politics for propaganda at NBC/MSNBC as well as CNN and FoxNews.  It’s all the same.

Of course, like so many others who have appeared to leave the Company of Loyola or the priesthood altogether, McLaughlin only took off his cassock for appearance’ sake.  He went to his grave doing the bidding of the Superior General.

Who runs the media, the Jews or the Jesuits?

The answer is clear.

Resistance Rising 104: Johnny And Bill Hughes Take On The Nicodemites

Resistance Rising 104: Johnny And Bill Hughes Take On The Nicodemites