There’s a solitary man at the financial center of the Ferguson protest movement. No, it’s not victim Michael Brown or Officer Darren Wilson. It’s not even the Rev. Al Sharpton, despite his ubiquitous campaign on TV and the streets.

Rather, it’s liberal billionaire George Soros, who has built a business empire that dominates across the ocean in Europe while forging a political machine powered by nonprofit foundations that impacts American politics and policy, not unlike what he did with MoveOn.org.

Mr. Soros spurred the Ferguson protest movement through years of funding and mobilizing groups across the U.S., according to interviews with key players and financial records reviewed by The Washington Times.

In all, Mr. Soros gave at least $33 million in one year to support already-established groups that emboldened the grass-roots, on-the-ground activists in Ferguson, according to the most recent tax filings of his nonprofit Open Society Foundations.

The financial tether from Mr. Soros to the activist groups gave rise to a combustible protest movement that transformed a one-day criminal event in Missouri into a 24-hour-a-day national cause celebre. 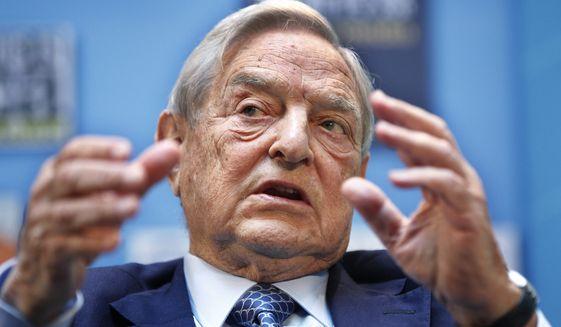 “Our DNA includes a belief that having people participate in government is indispensable to living in a more just, inclusive, democratic society,” said Kenneth Zimmerman, director of Mr. Soros‘ Open Society Foundations’ U.S. programs, in an interview with The Washington Times. “Helping groups combine policy, research [and] data collection with community organizing feels very much the way our society becomes more accountable.”

Mr. Zimmerman said OSF has been giving to these types of groups since its inception in the early ‘90s, and that, although groups involved in the protests have been recipients of Mr. Soros‘ grants, they were in no way directed to protest at the behest of Open Society.

“The incidents, whether in Staten Island, Cleveland or Ferguson, were spontaneous protests — we don’t have the ability to control or dictate what others say or choose to say,” Mr. Zimmerman said. “But these circumstances focused people’s attention — and it became increasingly evident to the social justice groups involved that what a particular incident like Ferguson represents is a lack of accountability and a lack of democratic participation.”

Other Soros-funded groups made it their job to remotely monitor and exploit anything related to the incident that they could portray as a conservative misstep, and to develop academic research and editorials to disseminate to the news media to keep the story alive.

The plethora of organizations involved not only shared Mr. Soros‘ funding, but they also fed off each other, using content and buzzwords developed by one organization on another’s website, referencing each other’s news columns and by creating a social media echo chamber of Facebook “likes” and Twitter hashtags that dominated the mainstream media and personal online newsfeeds.

Buses of activists from the Samuel Dewitt Proctor Conference in Chicago; from the Drug Policy Alliance, Make the Road New York and Equal Justice USA from New York; from Sojourners, the Advancement Project and Center for Community Change in Washington; and networks from the Gamaliel Foundation — all funded in part by Mr. Soros — descended on Ferguson starting in August and later organized protests and gatherings in the city until late last month.

All were aimed at keeping the media’s attention on the city and to widen the scope of the incident to focus on interrelated causes — not just the overpolicing and racial discrimination narratives that were highlighted by the news media in August.