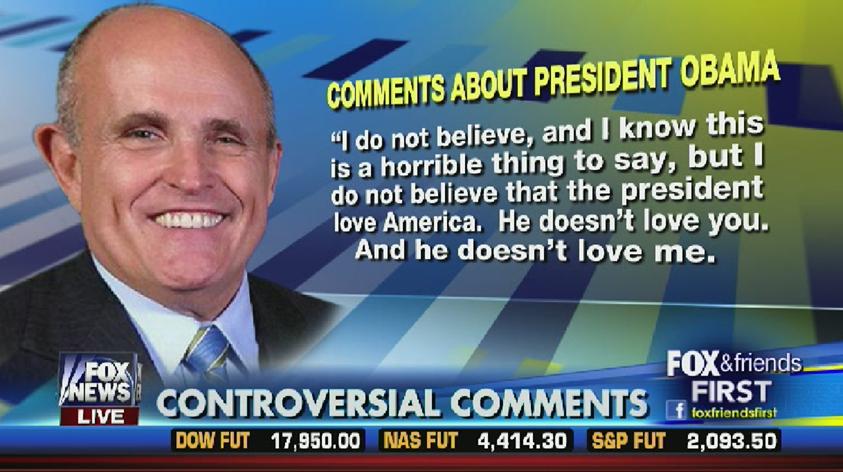 The current flap over unflattering comments former NY mayor Rudolph Giuliani made regarding Barack Obama is completely contrived as both work for the same team.

Allow me to elucidate from quoting my new book:

Barack Obama’s rhetoric has been pricking the ears of “Liberal” Catholics; some of whom are saying, “He sounds just like I do!”175

Many will be surprised to know that Obama’s Communist roots have Catholic origins.

As Andrew Higgins of the Washington Post noted176, while much a due is made of Obama’s 1 year at a muslim madrasa, the rest of his time in Indonesia was spent under Catholic tutelage. …

Obama is so controlled, he is required to speak from a teleprompter even when he is before a classroom of 6th grade children, as was the case in Falls Church, VA in January of 2010.

Even Left-wing comic Jonathan Leibowitz (more popularly known as “Jon Stewart”) couldn’t pass up the opportunity to lampoon this event574, but the idea that Obama is handled from a higher power just as, if not more malignant towards America than he is, is no laughing matter.

Who is telling Obama what to say?

Favreau started his political career via an internship with Skull and Bones alum John Kerry while attending Jesuit Holy Cross.

From there, his Leftist ideology passed the test for the Society of Jesus and he was given to Barack Obama …~ Illuminati Unmasked, pp. 42, 199

The Knights of Malta are a front group for temporal Catholic power—political power amongst nation states.

The Independent (a British newspaper) tried to make light of the pull the Knights of Malta have but were forced to acknowledge this:

Leaked lists of their supposed membership read like a Who’s Who of the global establishment: the first President George Bush; Rupert Murdoch; the head of the CIA; Tony Blair; Michael Bloomberg. All, apparently, signed-up representatives of the Sovereign Military Hospitaller Order of Saint John of Jerusalem of Rhodes and of Malta.

“The Knights are your CIA, your politicians, your lobbyist, your previous, present and future presidents,” Google tells us. “They are the most powerful group known to man. They are the agents of the dark lord.”218 …

Fox News is one the most popular mainstream news outlets in America. It is strongly contrasted by the overt Left-wing bias of the other news agencies. Featuring supposed Right-wing ideologues like Irish Catholics Sean Hannity and Bill O’Reilly, what Fox News has become is the creation of Australian billionaire Rupert Murdoch.

Amongst Murdoch’s lesser-known accolades are that he is a Knight of Malta733 and a Papal Knight of Saint Gregory.734 ~ Illuminati Unmasked, pp. 62, 246

This was on the heels of another Army scandal where parents had been shocked to learn that their children from 3 years old down to three months old had been sexually assaulted on the other side of the country in a West Point daycare facility. Even more upsetting to the parents; officers, administrators and commanders at West Point were all claiming they bore no responsibility for the outrage1451. United States Attorney Rudolph Giuliani was the man entrusted by the Elite to make it go away. …

Giuliani was a loyal Loyola insurgent, educated at (Catholic) Christian Brothers’ Manhattan College1453 with an honorary degree from Loyola. His pro-abortion stance may have bothered a bishop or two, but it didn’t bother the Jesuits.1454

When pedophile priest and personal friend Monsignor Alan Placa (who had officiated at Giuliani’s wedding) needed a place to run to and be hired with, “Giuliani Partners in New York” was there for him.1457

Giuliani seems to fit right in with such perversion. He has appeared in public dressed as a woman no less than four different times since 1997—the last time was for the homosexual TV show Queer As Folk.1458

When Georgetown alum George Tenet (then Director of the CIA) would oversee the most treasonous mass-killing in America on September 11th, 2001, Giuliani was the man in NYC to see it done on his end. ~ Illuminati Unmasked, pp. 510-511