I think the Bible is pretty clear on that. [some capitalization added to correct irreverence]

Whatever the L-RD pleases, He does,
In Heaven and in Earth, in the seas and in all deeps. ~ Psalms 135:6

“Declaring the end from the beginning,
And from ancient times things which have not been done,
Saying, ‘My purpose will be established,
And I will accomplish all My Good Pleasure’…” ~ Isaiah 46:10

“All the inhabitants of the Earth are accounted as nothing,
But He does according to His Will in the host of Heaven
And among the inhabitants of Earth;
And no one can ward off His Hand
Or say to Him, ‘What have You done?’” ~ Daniel 4:35

You will say to me then, “Why does He still find fault? For who resists His Will?” On the contrary, who are you, O man, who answers back to G-d? The thing molded will not say to the molder, “Why did you make me like this,” will it? Or does not the potter have a right over the clay, to make from the same lump one vessel for honorable use and another for common use? ~ Romans 9:19-21

Then how can He allow so much evil?

—Because evil has a purpose…and that purpose has more to do with His Son than it does you.

Those who receive fame, fortune and/or power without spiritual depth and maturity are accursed. That’s why it’s man’s highest calling to toil for his daily bread. [Genesis 3:19]

Do you have a grueling job that wears you out but pays the bills and takes care of your family? Rejoice! You are living the literal Will of your Heavenly Father!

Pain, challenge, trail; these are the things that deepen the soul.

Why is this so important? Because your highest calling is to be the Bride of Christ [Revelation 19:6-9]; the best companion for Him possible. In order to do that, you must be as much like Him as you are able [Romans 8:29]. Whoever wanted a Companion that they had nothing in common with?!

So, there is a purpose for “evil”…and “evil” knows this.

In fact, there is an aspect of what the Adversary and his minions do that they see as “noble”. Shockingly, some of it may very well be.

The apocryphal book of Jubilees tells a fascinating story. After the Flood, unclean spirits began to lead the sons of Noah astray again. They sensed what was going on and beseeched their father to call upon the L-rd and the L-rd responded. He was going to bind every last one of them, but the chief Watcher, “Mastema”*, begged Him to stay His Hand and YHWH agreed!

“And the chief of the spirits, Mastema, came and said: ‘YHWH, Creator, let some of them remain before me, and let them listen to my voice, and do all that I shall say unto them; for if some of them are not left to me, I shall not be able to execute the power of my will on the sons of men; for these are for corruption and leading astray before my judgment, for great is the wickedness of the sons of men.’

And He said: ‘Let the tenth part of them remain before him, and let nine parts descend into the place of condemnation.’” ~ Jubilees 10:8-9

As the Accuser eradicates all vestiges of Christendom from Western public life and replaces it with sin and satanism, the Body of Christ sits idle.

When egalitarians mitigate the influence Christians can have by making them equal with “all other religions”, Christians agree to the terms!

In a sense, they are being both tried and weeded out—proven to be unworthy or unwilling. Only those who overcome and endure to the end shall be saved.

And Jesus answered and said to them, “See to it that no one misleads you. For many will come in My Name, saying, ‘I am the Christ,’ and will mislead many. You will be hearing of wars and rumors of wars. See that you are not frightened, for those things must take place, but that is not yet the end. For nation will rise against nation, and kingdom against kingdom, and in various places there will be famines and earthquakes. But all these things are merely the beginning of birth pangs.”

“Then they will deliver you to tribulation, and will kill you, and you will be hated by all nations because of My Name. At that time many will fall away and will betray one another and hate one another. Many false prophets will arise and will mislead many. Because lawlessness is increased, most people’s love will grow cold. But the one who endures to the end, he will be saved.” ~ Matthew 24:4-13

This Adversary has overwhelming control of the entire world system. The sons of Adam have voluntarily given up their authority over stewardship and the sons of the devil have usurped their power.

But they must keep the great masses asleep ‘til the end with bread and circuses and, even now, they see the writing on the wall.

In the circles of awake and aware Christian Resistance to the Luciferian order it is now common to dissect the Babylonian rituals of the entertainment industry. One YouTube “Truther”, the Vigilant Christian, actually seeks insider information to insure that his debunking videos are released right alongside, if not before, the song or video or commercial he is examining.

Not only do we all know and expect the industry extravaganzas at the Super Bowl to be a premier platform for perversion but many are now waking up to just how rigged even the game, itself, appears to be.

The Luciferian high priestess of lust and witchcraft, today, is Katy Perry and all of us Red Pill crowd knew full well why she was chosen for the halftime “entertainment”.

When we saw her unveiled atop some great predatory beast we all knew what we were being told. 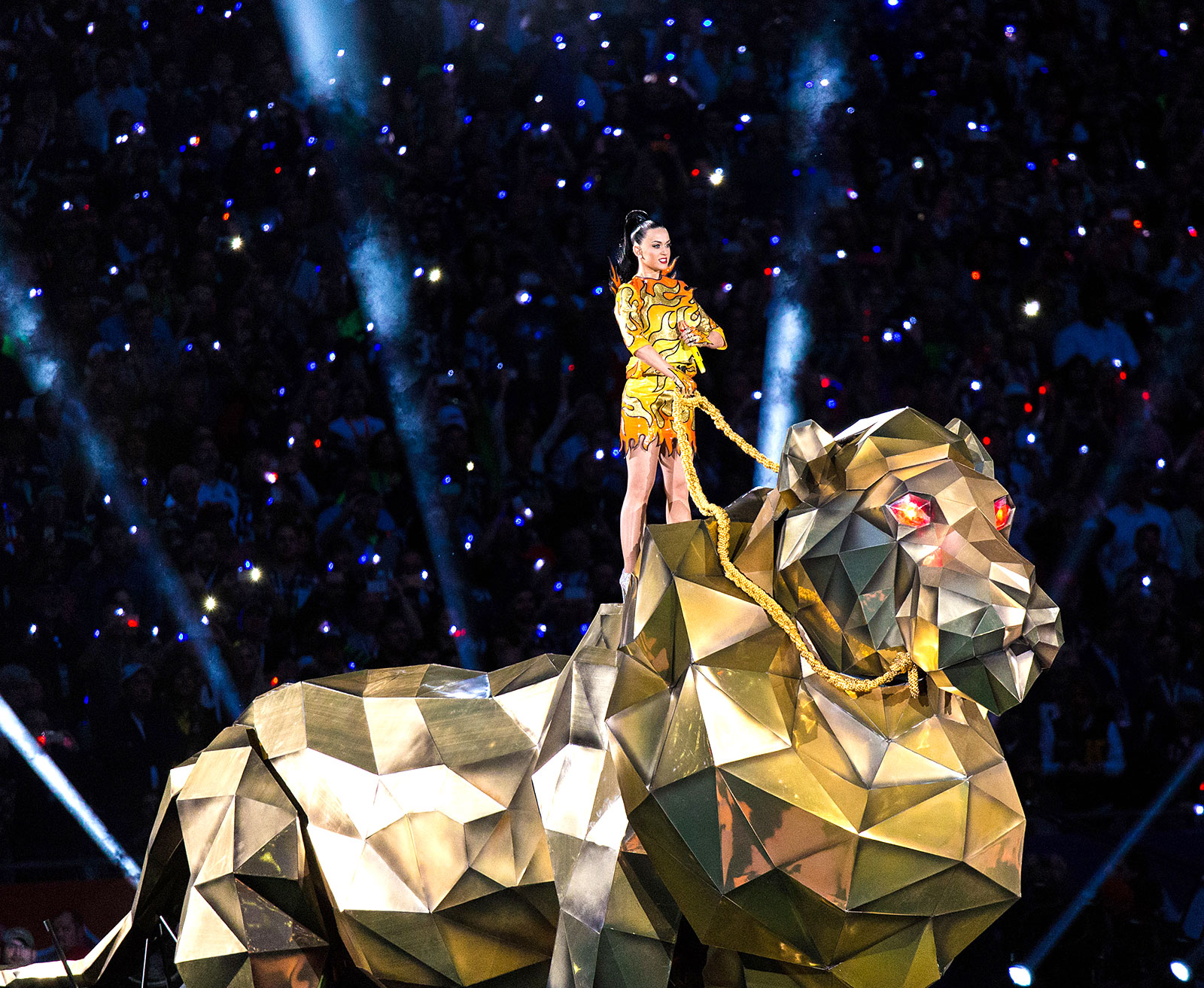 Then one of the seven angels who had the seven bowls came and spoke with me, saying, “Come here, I will show you the judgment of the great harlot who sits on many waters, with whom the kings of the earth committed acts of immorality, and those who dwell on the earth were made drunk with the wine of her immorality.” And he carried me away in the Spirit into a wilderness; and I saw a woman sitting on a scarlet beast, full of blasphemous names, having seven heads and ten horns. The woman was clothed in purple and scarlet, and adorned with gold and precious stones and pearls, having in her hand a gold cup full of abominations and of the unclean things of her immorality, and on her forehead a name was written, a mystery, “BABYLON THE GREAT, THE MOTHER OF HARLOTS AND OF THE ABOMINATIONS OF THE EARTH.” ~ Revelation 17:1-5 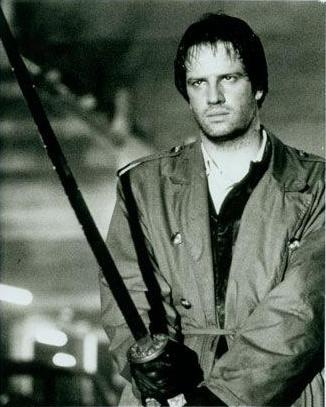 Perhaps they were hesitant to be too obvious and put the Whore upon a lion and not something more clearly related. Perhaps they wished to mock how thoroughly they control Christendom as Christ is the Lion. [Revelation 5:5]

But why make this association at all? It’s not particularly flattering. It simply tells those who are awake, “Yes, you’re right.”

Were the Patriots really scheduled to win the Super Bowl? Why? Is this a tacit acknowledgment that the Luciferians know a Resistance is rising and their doom is nigh at hand, their mission to test the Body having nearly been fulfilled?

In the final climactic battle between McLeod and the Kurgan of Highlander (1986), the massive adversary raises his sword in salute to the hero just before he loses his head.

He knows, there can be only one.

He also knows the Word…to some degree, better than Johnny.

And the beast which I saw was like unto a leopard, and his feet were as of a bear, and his mouth as the mouth of a lion: and the dragon gave him his power, and his seat, and great authority. ~ Revelation 13:2, King Jimmy

* Some scholars believe this is the devil, himself. This is actually implied in Jubilees 10:11.