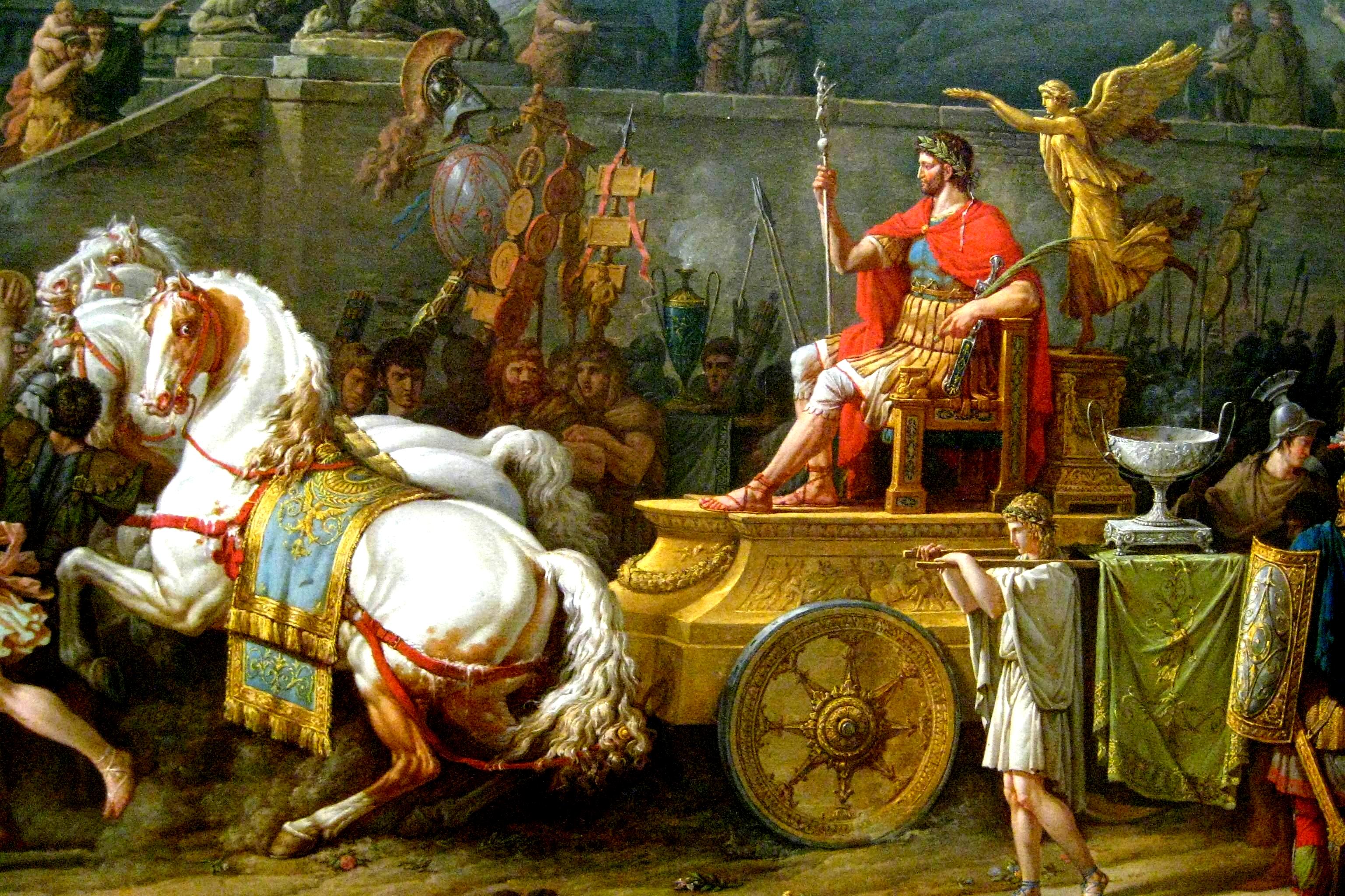 The Long Coup D’etat to Finally be Celebrated!

For generations, Rome (lead by the Jesuits), has subverted and infiltrated her greatest philosophical enemy: Protestant America. She has repeatedly used her secret society puppets to control America’s most poisonous foes—her own intelligence agencies and financial institutions.

The takeover has been so complete, September 24th, 2015 will mark the triumphal entrance of the Vatican’s first Jesuit Pope; Jorge Mario Bergoglio, “Francis I”.

It was announced by their man running the House of Representatives, John “the Crying Speaker” Boehner.

Whenever they can’t control everyone, they control key positions—gatekeepers.

Speaker of the House is one of their favorites, as I’ve told you previously.

The Presidio has been the reward of other Congressional Catholic Communist faithful like John Murtha (ensconced in power until carried out in a pine box) and former House Speaker Nancy Pelosi. …

Pelosi was sworn in back in 2007 by her benefactors when, for the first time in Congressional history, a Jesuit priest gave the invocation on the floor of Congress:

USF [University of San Francisco] President Stephen A. Privett, S.J. called upon Congressional leaders to put aside self-interest and to pursue the common good of all people during the invocation of the opening of the 110th Congress and the swearing in of Nancy Pelosi as the speaker of the House of Representatives in January. ~ USF President Delivers Prayer at Opening of Congress, USF Magazine

In the picture below (left to right), you will see the then-Chaplain of the House of Representatives, Father Daniel P. Coughlin, San Francisco University President and Jesuit Priest, Steven A. Privett, and their happy little helper, Nancy Pelosi. 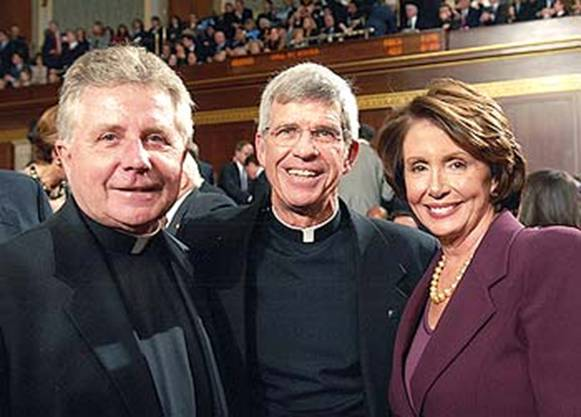 Boehner has done a stellar job protecting their man, Barry, from attack. I warned you about that, too.

When current House Speaker John Boehner replaced his arch villain hated rival from the other Party, Nancy Pelosi, he gave her a big fat smooch. “Thanks sweetie! We’ll take it from here.” 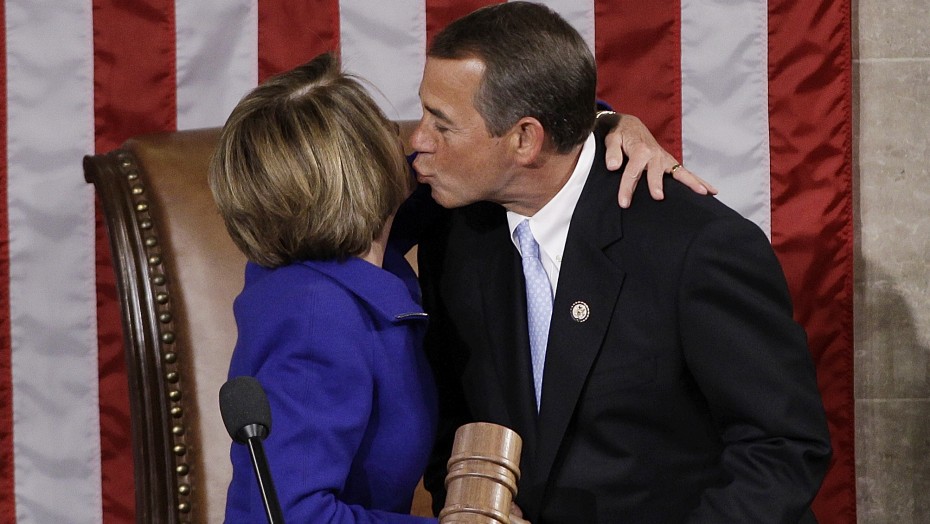 Recall in my last column how I told you that Pelosi had a special swearing-in ceremony lead by the first Jesuit to ever darken the floor of Congress, or that the current House Chaplain is also, you guessed it, a Jesuit.

Yes, the House of Representatives is just one big happy Catholic family…happily flooding America with illegal aliens…happily watching as Barack Obama tears the nation asunder…happily adding jetfuel to the bonfire of our guaranteed fiscal collapse. Every one of them should be fired and most should be dangling from a rope.

Boehner has been watched over since attending Moeller Catholic High School in Cincinnati and received real training at the hands of the Jesuits at Xavier.

Boehner is far from the only one. What many consider America’s greatest contemporary President—Ronald Wilson Reagan—ushered in the Age of Rome in Amerika.

Although I have great respect for Ronald Reagan as a true outsider who loved America there were several areas where he was either manipulated or simply wrong, from taking true select-fire “assault weapons” out of the hands of the common man** to allowing Catholic Edward Kennedy talk him into amnesty for illegal aliens. Scandals such as Iran/Contra made it clear that Reagan was handicapped by his Vice President, George Herbert Walker Bush, former Director of the CIA and nicknamed “Magog” from his Skull and Bones days. It was no coincidence that, 61 days after his inauguration he was shot by a Bush family friend.

In investigating the assassination of Abraham Lincoln, so many ties were found to the Vatican that the United States severed relations with the “sovereign entity” in 1867. The man to change that in late 1983 was Ronald Reagan. Perhaps knowingly or unknowingly, it was his administration that signaled the complete control of America by “the Unseen Hand”.

It is, indeed, an historical fact that on January 20th , 1981, Ronald Wilson Reagan was the first President of the United States to conduct his inauguration on the west front of the Capitol instead of the east front. As Alberto Rivera predicted, he was facing the Washington Monument.

For the full story on what the “Washington Monument” really is, go here.

From “religious tolerance” installed by the Vatican-sent Jesuit Carroll family at America’s founding, through the takeover by Vatican-controlled Freemasons, through the repeated murder of American leaders from Adams to Jefferson…Patton, Lincoln and Kennedy; the rise of Nazism, Communism, Islam and world wars; the Whore of Rome has been behind it all.