On November 14, 1965 in the Ia Drang Valley of Vietnam, in a small clearing called Landing Zone X-Ray, 400 young fathers, husbands, brothers, and sons—all troopers from the U.S. 7th Cavalry (Air Mobile)—were surrounded by 2000 enemy soldiers. The ensuing battle was one of the most savage in U.S. history. Here is a tribute to the nobility of those men under fire, their common acts of uncommon valor, and their loyalty to and love for one another. ~ David Bruce, Hollywood Jesus

Movie-goers will be touched by this film but military families in particular will be especially moved by it (the wife cried through half of it). 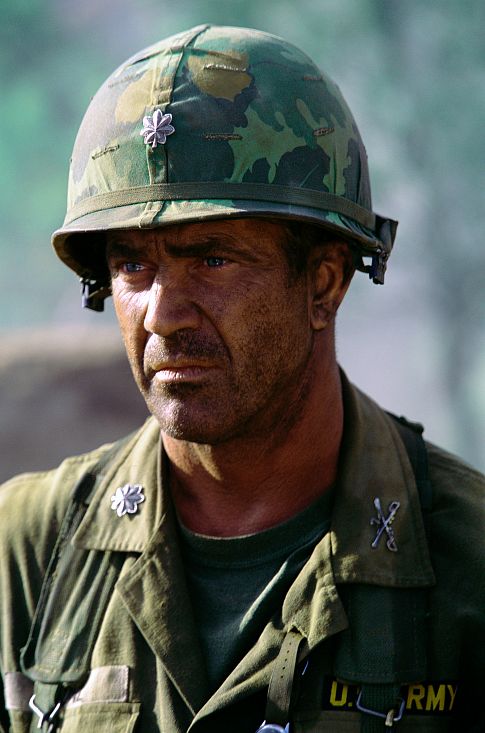 Like the Band of Brothers series, Blackhawk Down and Saving Private Ryan, the war film has finally come of age. This movie is a must-have for all soldiers and enthusiasts…especially when Mel Gibson liberally includes his now signature reverence for God throughout the movie.

These movies have ushered in a new genre of “war movie”, one that emphasizes realism, accuracy and brotherhood as well as a subtle form of patriotism.

This is to be contrasted with movies like Platoon, Full Metal Jacket and Apocalypse Now—movies that lean strongly left with their agendas and often lack authenticity as well. Wonderfully absent from this film are the drugged-up, undisciplined, disrespectful soldiers so disproportionally accented in Platoon, or the psychotic, DI killing, suicidal recruit in Full Metal Jacket (never have forgiven R. Lee for participating in that).

Did soldiers do drugs? Did Marine recruits lose it? —Yes, but in such small numbers that it does all soldiers and all Marines a disservice to accent them in a 2 hour movie for the sake of Hollywood sensationalism (which is all part of the “do anything for $” priority). It is a welcome event to have a movie show the brutality of war yet still be inspired by it, verses wanting to go out after the movie and stick your head in an oven because you’re an American.

Of course, this movie was based on the autobiographical account of real events depicted in Lt Gen Hal Moore’s highly-acclaimed book, We Were Soldiers Once…And Young which spent 17 weeks on the NY Times best-seller list.

It was co-authored by the UPI reporter who was actually there, Joe Galloway, portrayed in the movie by Barry Pepper (PVT Daniel Jackson—sniper—in Saving Private Ryan). Pepper did a top-notch job, and Galloway was shown as a cut above the typical reporter, coming in by Huey as the battle started to get hot. At one point, the NVA attack was so fierce and overwhelming he joined in the defense by firing an M-16 left by a fallen soldier. It reminded me of the scene in John Wayne’s The Green Berets (1968) where skeptic reporter George Beckworth (played by David Janssen) turns to help the SF soldiers he was previously so cynical towards because their outpost is about to be over-run. It’s ironic in the light of the criticism Wayne took for his movie being “filled with propaganda”.

After the battle of Landing Zone X-ray is over, a C-47 Chinook helicopter deposits a gaggle of reporters who scurry around bothering LTC Moore and reporter Galloway who is sharply contrasted to them, dirty and bloody in his GI greens and unflinching at artillery bursts. It was a great slap at the leftist media, a la Duke Wayne. 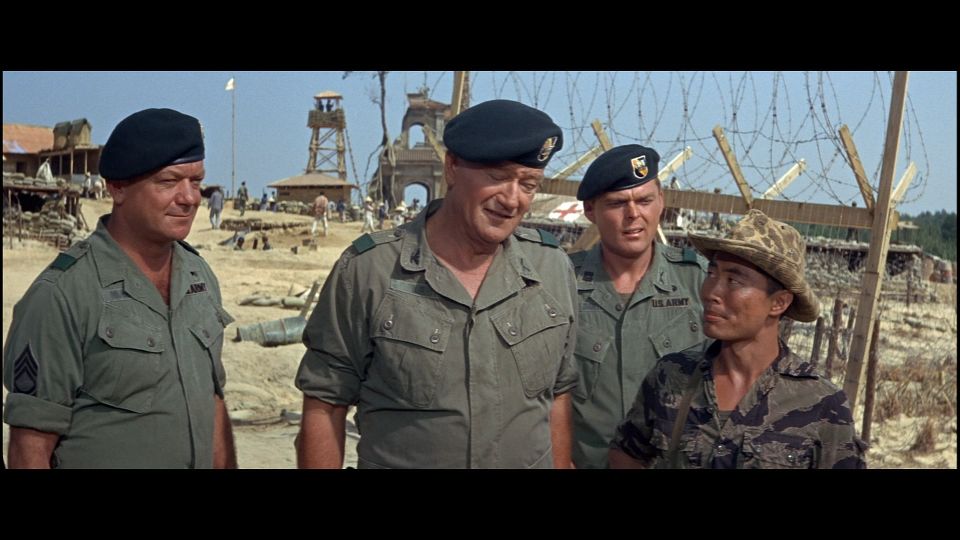 In fact, there were no major players who were obnoxiously stereotyped. Mel Gibson did an outstanding job portraying LTC Hal Moore who was depicted as a sensitive, studied, God-fearing soldier. This movie joins the ranks of the handful of others that treats Christian faith with reverence and respect. Knowing what we now know about Mel, he surely had a lot to do with that. There is a cute clash of Catholicism and Protestantism between Mel and his very young “daughter”. Tastefully done.

Nearly every movie about Viet Nam is a tragedy of some kind, but the tragedy of blundering incompetence wasn’t over done as is usual for Hollywood. LTC Moore saw ahead of time the stacked deck he would face, perhaps most poignantly foreshadowed when Moore is told that his unit would be redesignated the 1st BN, of the 7th REG (1/7th) for the deployment. He pauses and looks back cynically saying, “Custer’s regiment”. 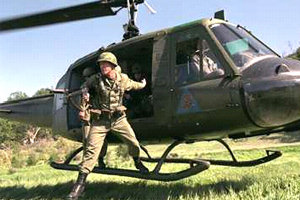 This movie is also an excellent study in leadership. Much is made of how LTC Moore—the BN CDR responsible for 395 soldiers (“exactly”, his sergeant major tells us) was the first one to set foot on the battlefield, and the last one to step off. It was a great slow-motion sequence of Mel’s foot stepping off the Huey at the start and back on at the finish of the battle.

In a speech at Ft. Benning before 1/7th deploys, he promised to bring every soldier back with him…alive or dead. At several points during the battle he checked for accountability. Before Somalia, before there was a Soldier’s Creed, there was Hal Moore.

During one of those accountability checks LTC Moore finds a young 2LT, “Jack Geoghegan” (played by Chris Klein), killed trying to rescue a wounded black soldier. Geoghegan’s character is also well done. We are shown during the movie that racism exists, but Geoghegan stops during a foot march to tenderly check the bare feet of that same black soldier. Geoghegan and his wife were Christian missionaries before he was commissioned—

Jesus…got up from supper, and laid aside His Garments; and taking a towel, He girded Himself. Then He poured water into the basin, and began to wash the disciples’ feet and to wipe them with the towel with which He was girded. ~ John 13:3-5, NASU

He died for that soldier—

There is a tender scene between Gibson and Klein in a chapel before the deployment. It involved a great discourse that was punctuated with Gibson giving an inspiring prayer with wiry humor. Very unique in a big-budget movie.

The worst character in the group is a glory-hound platoon leader who also gets killed due to his exploits.

Another well-played character was that of LTC Moore’s BN sergeant major, CSM Basil Plumley (played by a mustache-less Sam Elliott). His one-liners were the only times my wife laughed during the movie. At one point, Gibson turns to Elliott lamenting about how they were outnumbered just like George Custer, to which Elliot responds gruffly, “Sir, Custer was a pussy.”

Some of the aspects that set this movie apart were the points of view. Being that LTC Moore’s adversary was the uniformed North Vietnamese army, the audience saw what went on in the NVA command bunker, done in Vietnamese with subtitles (no other way if you want to go for realism).

There are a couple of reasons this seemed to be unique;

Another side of events not often shown is how the wives coped during the time their husbands were deployed. Madeleine Stowe plays LTC Moore’s wife, Julie. The movie DVD has a behind-the-scenes feature where Julie Moore complimented Stowe for her efforts at research. Lt. Gen. Moore and Joe Galloway said the same about their respective parts—the actors and movie-makers were sincerely interested in getting it right.

I don’t know about historical accuracy but the movie portrays wives getting a telegram from a taxi driver to let them know their husband was dead because “the Army wasn’t prepared for the casualties”. Stowe takes it upon herself to hand-deliver each notification rather than let the cab driver do it.

If that’s true, it is absolutely appalling (but not shocking for those of us who have ever been in the military). If you’ve read the book and that is corroborated, write me so that I can update this review.

As far as historical accuracy, the battle seems to unfold on screen just as it happened. Times and places are given before appropriate scenes. They match perfectly with information found on the official web site (a fantastic site that even includes flash animation depicting how the battle unfolded).

Uniforms, weapons and especially aircraft were expertly accurate. I was particularly thrilled to watch two A-1 “Sandys” give close air support. There were also sorties by F-100 Super Sabers, an F-4 Phantom and an A-4 Skyhawk. Computer graphics were done to affect that and I felt it was worth the effort. I have never seen an F-100 in a Viet Nam movie and that, too was a thrill. 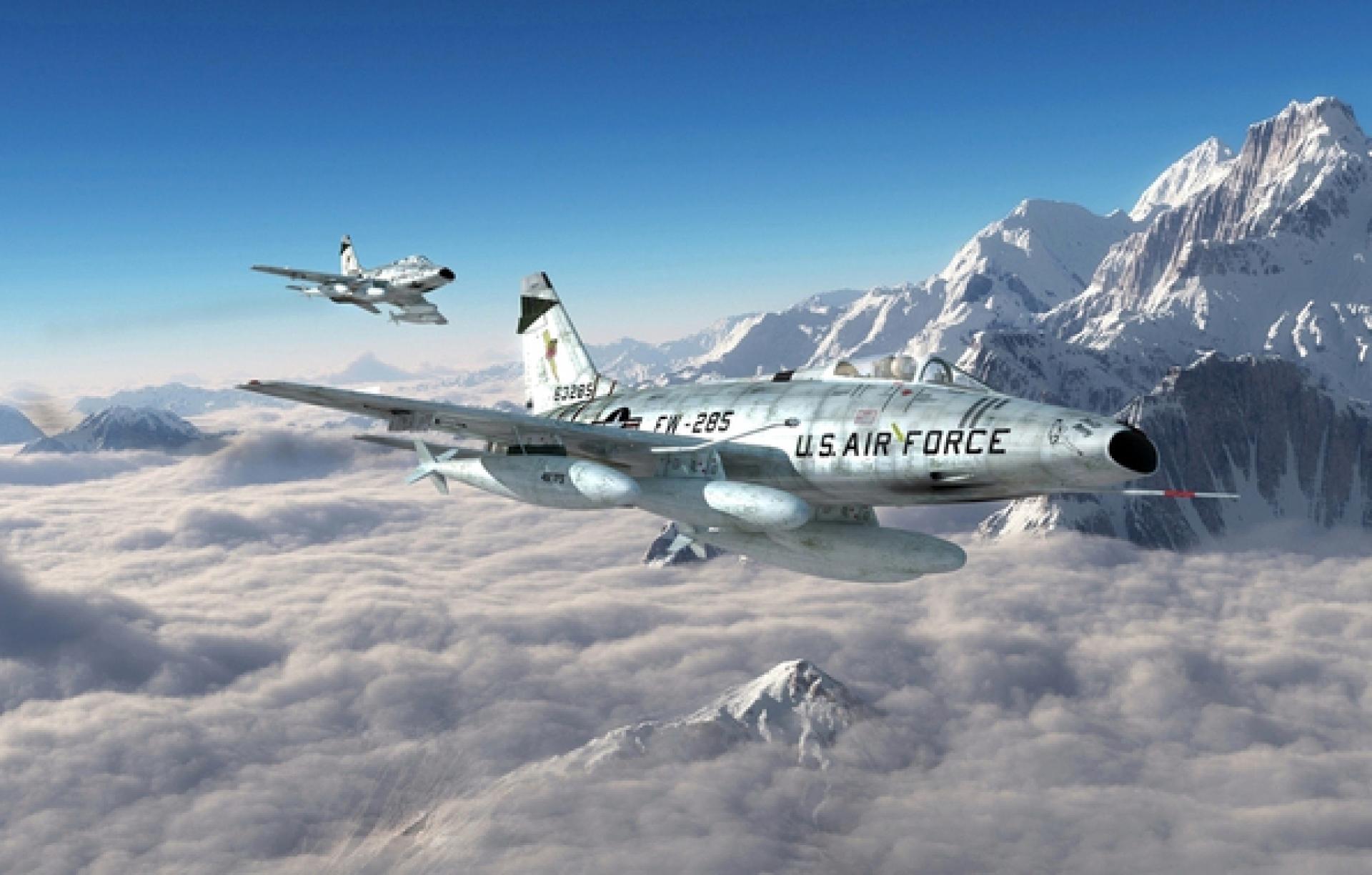 The only negative thing I have to say about the movie is that Mel may have tried to give a southern accent at certain times. It was not consistent. If it were I would’ve been very impressed. You may not even pick up on it as you watch but it seemed to come across that way.

Over all, I give this movie an “8” out of “10”—well worth seeing. The replay value is only “5” due to the gory battle scenes and heart-wrenching death notifications…but the wife and I will probably buy it anyway because it was that good and we want to support another great, God-fearing Mel Gibson movie. 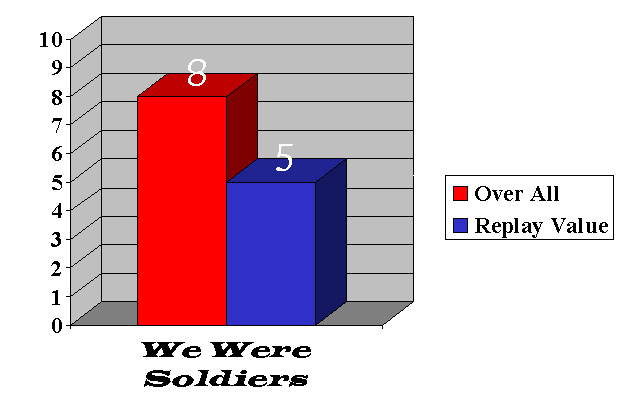 Oh, my mother wants credit for being the first one to tell me about this movie (happy?).

Lastly, there is an astounding tragedy linked to this movie. Many of the men who fought that battle in 1965 are around to see the battle immortalized on the silver screen. One of them is not.

Lt. Rick Rescorla, was a Platoon Leader, in B CO during that battle. A photo of him was taken just prior to the bayonet attack on the morning of November 16, 1965. It was the photo that was used on the cover of LTC Moore’s book.

He’d fought against Communist-backed insurgencies in Cyprus from 1957 to 1960, and in Rhodesia from 1960 to 1963. These experiences had made him a fierce anti-Communist. The reason he had come to America, he said, was to enlist in the Army, so that he could go to Vietnam. ~ The Real Heroes Are Dead, James B. Stewart, NewYorker.com 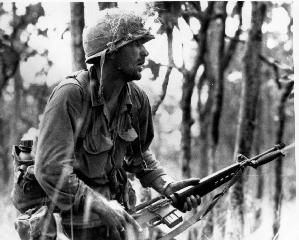 But Rick Rescorla wasn’t around to see this movie when it was released. He was killed on September 11, 2001.

Rick was vice-president for corporate security for Morgan Stanley Dean Witter. He was in Tower 2 that day and despite official requests to remain in the building he was last seen holding a megaphone ordering hundreds of his employees to evacuate the South Tower (almost certainly saving those lives).

Rick survived the Communists in 1965, only to be killed by Islamic terrorists in 2001.

And the fight continues…

I am an American Soldier.
I am a Warrior and a member of a team.
I serve the people of the United States and live the Army Values.

I am disciplined, physically and mentally tough, trained and proficient in my warrior tasks and drills.
I always maintain my arms, my equipment and myself.
I am an expert and I am a professional.
I stand ready to deploy, engage, and destroy the enemies of the United States of America in close combat.
I am a guardian of freedom and the American way of life.
I am an American Soldier.