Arizona governor Jan Brewer has been painted as a “Tea Party” Patriot because of some moderately strong stands on making the Central government help pay for the illegal immigrant scourge plaguing the Grand Canyon State. A few weeks ago, this picture made the rounds on social media falsely leading Patriots to believe that Brewer had handed it to Barack Obama during a visit. Less well-known is this picture from the same visit, showing just what a messiah lapdog Brewer is.

Further proving her status as a Machine schill, Brewer has vetoed a series of powerfully right-leaning bills that may never see the light of day again (given the difficulty of sponsoring a tough bill, getting it though various committees and, depending upon the state, through both legislative bodies to finally rest on the executive’s desk).

The first two despicable vetoes were of a bill that would’ve stopped Arizona campuses from being “gun free slaughter zones” and the second bill was one that would’ve put teeth into the Constitutional requirement for presidential candidates to prove they are natural born citizens (at least for Arizona voters).

The latest veto outrage is one that would’ve affirmed the state’s primacy over the Leviathan Central gov’t and the role of sheriffs in executing that responsibility. It is a particularly heinous betrayal of the people of Arizona given the frightening expansion of Central gov’t power under Barack Hussein Obama. 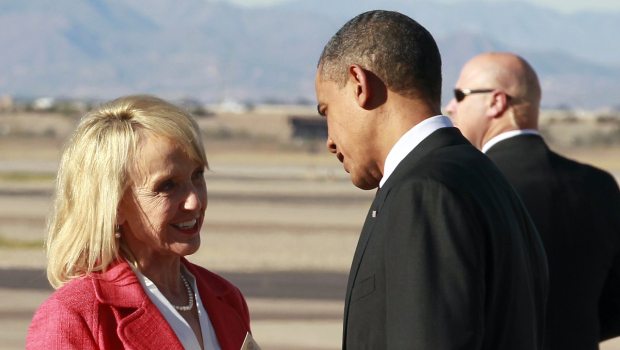 Apparently, the outrageous attacks by Planned Slaughterhood on the breast cancer group Komen (after they dared to stop funding from the clear connection between killing babies in the womb and breast cancer), the research organization has decided to greatly magnify it’s penance to the Alters of Molech in a pledge to fund seventeen new abattoirs.

Child Paralyzed By Vaccinations And Stolen From Mother By State

LIVING LARGE WHILE THEY KNOCK YOU INTO THE STONE AGE

MICHELLE ANTOINETTE ON YET ANOTHER VACATION (because you owe them)

The really big corporations simply move. The ones that can’t afford to move implode and take their jobs with them—exactly as they were designed to do.

WATCHING, AND EXECUTING YOU

MICROSOFT’S “KINETIC” IS WATCHING YOU

BLACK FEMALE PROSECUTOR CHOSEN BY WHITE REPTILICAN FL GOV TO RAILROAD ZIMMERMAN INTO JAIL
The New American: For her part, Corey’s words at the press conference where she announced the charges were unusual to say the last. Said Corey, “It was less than three weeks ago that we told those sweet parents that we would get answers to all of their questions no matter where our quest for the truth led us. And it is the search for justice for Trayvon that has brought us to this moment.”

The remarks almost sound as if Corey is working for the Martins and the not people of Florida, the plaintiffs in the case.

A SLIP OF HIS FORKED TONGUE

KING MESSIAH: “Jesus was a Son of God.”

A Global Genocide against Christians Underway