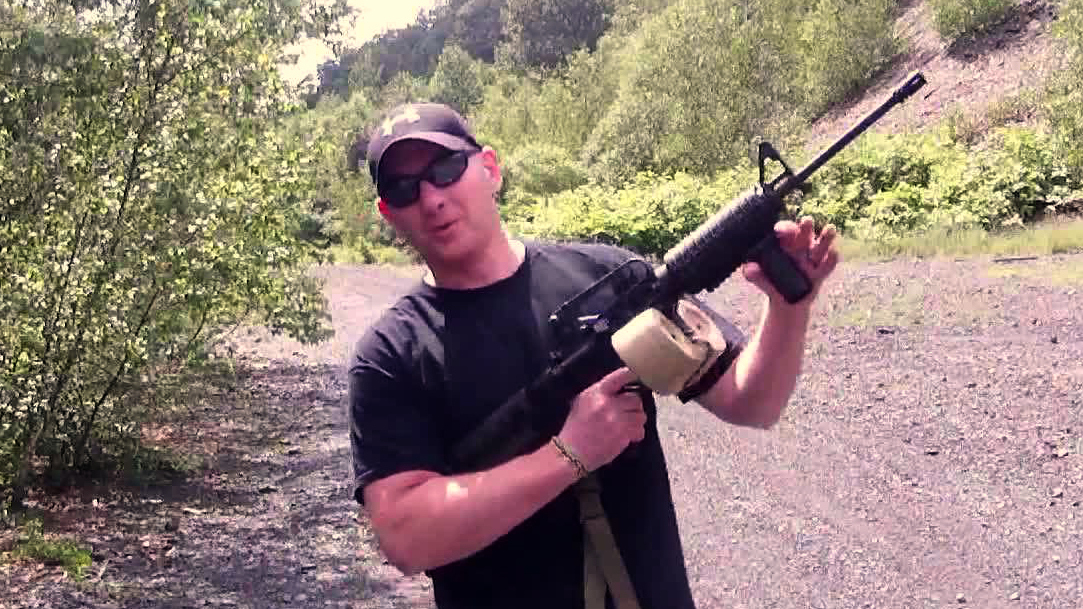 Is Mark Kessler One of the Most Dangerous Men in America?

I normally leave updates at the end of a column but it is critical for the reader to know that since this was published, Mark Kessler has been embroiled in yet more controversy which finally proves that he is, at best, mentally unstable and, at worst an agent provocateur for the traitors running the United States government. For more, read the column below:

Mark Kessler could be the most dangerous man in America, but if you tell him he is, he’ll say he doesn’t care.

Yesterday, an interesting event was held in an obscure Pennsylvania town: the first meeting of the local “Constitutional Security Force”. Spurred by a perceived overwhelming encroachment of the Federal government on personal liberty and private property, the meeting was a somewhat clichéd gathering of rural folk, some clad head-to-toe in camouflage.

But what keeps the “CSF” from being a bad episode of National Geographic’s Doomsday Preppers is its founder: Gilberton Borough Police Chief Mark Kessler.

Kessler is a no-nonsense lawman whose primary influence in politics and values appears to have been his father, Joseph Kessler, a man who served with distinction in Viet Nam.

In January of 2013, Kessler made the national scene by submitting a resolution he sponsored for consideration by the Borough council. Unanimously adopted, the resolution is quite astounding. It essentially nullifies all Federal, state and local gun control measures.

All federal, state or local acts, laws, orders, rules or regulations regarding firearms, firearms accessories or ammunition are a violation of the 2nd Amendment along with Article 1, section 21 of The Pennsylvania Constitution and in violation of this resolution.

Further, the resolution proclaims that Gilberton public officials do not recognize said “unconstitutional restrictions” on the 2nd Amendment and requires those representatives to adopt or enact any and all measures as may be necessary to prevent the unconstitutional enforcement of any federal, state or local acts, laws, orders, rules, or regulations in violation of the 2nd Amendment of the Constitution of the United States along with Article 1, section 21 of the Pennsylvania Constitution “The right to keep and bear arms”.

Yes, Gilberton Borough is a small province boasting a population of only 867 but a local resolution of this magnitude is brazen, indeed. Not since the sleepy town of Kennesaw, Georgia made headlines with its 1982 ordinance requiring every household have a firearm in it has such an official statement been made in defiance of state and national authorities.

News of the Kessler resolution spread like wildfire and the police chief received calls for interviews from sources all over the country to include nationally-syndicated radio talk show host Alex Jones.

The interview was such a success, Jones ran spots for Kessler on his news website as well as his nightly news program.

The impetus behind Chief Kessler’s bold move was a desire to defend against the deluge of gun control measures that were introduced by politicians after the Sandy Hook Elementary School Shooting. The worst of these measures was a bill by Senator Diane Feinstein (D, CA)—the same politician who so instrumentally pushed the Clinton-era so-called “assault weapons” ban in 1995:

Feinstein’s new bill was such a draconian over-reach that some sources were linking it to the gun confiscation legislation of Nazi Germany.

Defenders of the 2nd Amendment put so much effort into stopping Feinstein that when the career public servant’s legislation was declared “dead on arrival”, they began to rest easy. Sadly, there are still many more battles raging on such as a Federal push for more stringent background checks on gun purchasers. With the support of key Republicans, this measure could very easily pass despite dire warnings that such data has historically been used as a precursor to gun confiscation. Instead we are told that we should simply “trust the government”. They would never maintain or abuse personal information they promised not to.

Meanwhile, dangerous politicians were pulling out all the stops to strip citizens naked:

But according to Chief Kessler, one organization that showed no interest at all in his resolution was the National Rifle Association. Kessler stated during his town hall and to me by phone that his first attempt to get advice from the NRA (including help in how to word a legal resolution) went completely ignored and when he put effort into keeping them informed via e-mail he was asked to stop due to supposed “death threats” the organization was getting as a result of being associated with him. As of this writing my attempts to contact the official in question have also been ignored.

An idyllic-looking father and son…a bearded gentleman with “PASTOR” emblazoned on his ball cap…an elderly husband and wife…a handful of disheveled-looking people outfitted in Marine Corps woodland digital camouflage…the audience for Chief Kessler’s Constitutional Security Force meeting was as divergent as it was unusual and to his credit he appeared to treat all comers with equal respect.

The audience was no reflection on Kessler’s lineup of speakers which included childhood friend and defense attorney Joseph Nahas. Nahas spoke on his involvement in the high-profile case of an illegal alien found dead after an altercation with three local teens. According to the lawyer, Luis Ramírez was questioned by the boys for having a 14 year old girl with him after 11 PM and the contact devolved from there. Nahas told the audience that the death of Ramírez was accidental and an earlier state court acquittal of Derrick Donchak and Brandon Piekarsky of murder seemed to be in line with his assertion.

Then the Federal government stepped in. In an effort to please radical racist lobby groups such as LULAC and La Raza (“the race”) then Democrat governor Ed Rendell appealed to Federal authorities to act and re-try both the boys along with local law officers who were seen as “obstructing” the investigation. In what some have called a “witch hunt”, Federal prosecutor Myesha Braden proceeded to use the Fair Housing Act to prove the boys had committed a “hate crime”.

The take-away for the audience according to Nahas? “If the government wants you, they are going to get you.” Truly, one powerful definition of “tyranny” is a government that has so many laws and regulations that any citizen can be targeted at will and the appropriate infraction can be easily found against them. As we sit in the shadow of very unpatriotic warrantless wiretapping and unmanned surveillance drones flying overhead, the statist bromide of “if you aren’t doing anything wrong you have nothing to fear” rings ruefully hollow.

Nahas also stated that he has never met a more corrupt cabal than the “Civil Rights Division” at the United States “Department of Justice”. Sadly, I’m inclined to agree. When a government attorney is so repulsed by the decision of Attorney General Eric Holder to drop a clear case of black-on-white voter intimidation that he resigns his position, it’s clear that vendettas against “racism” flow only in one direction.

Chief Kessler’s audience was then treated to a second legal speaker, 2nd Amendment attorney Joshua Prince who has argued against the necessity of concealed-carry licensing before the Commonwealth Court of Pennsylvania. Unusual fare for what outsiders would’ve considered unvarnished onlookers, Prince shocked his attentive listeners with stories of how easy it is for a government to deprive a citizen of their right to own a firearm whether it was a “protection from abuse” order (granted with frightening ease) or a simple paperwork error at the local hospital who neglected to mark your self-admittal for psychiatric help as “voluntary”.

The legal advice ended with a disturbing warning of several gun control measures facing Pennsylvanians, none of which are getting media coverage. State Senate bill 435 is a Democrat-sponsored attempt to reinstitute the Clinton “Assault Weapons” ban and a slew of House bills would do even more including making it a crime to use lethal force against a home invader when you can “retreat”, requiring neighborhood watch groups to register with the State Attorney General’s office and create general havoc for firearm shops across the Commonwealth. It’s not surprising that a Leftist Philadelphia Democrat is behind them all.

After all of this repeated bad news, Mark Kessler revealed his trump card. Reaffirming his commitment to maintain the law and not initiate a hostile action with any offending government agency, he assured his audience he would end one. The police chief then put “truth to power” by introducing his guests Justin and Joe from Fast-Tactics firearms training academy. They were present to discuss a future opportunity to make real-world firearms training available to the common citizen provided you could BYOG&A (Bring Your Own Guns & Ammo).

This was getting real.

Nowhere else was I aware of a constituted law enforcement officer with outstanding legal representation putting their reputation on the line to create a true “citizen militia” for protection against government tyranny.

Perhaps Mark Kessler was putting more on the line than that.

Less than 5 days ago, Mingo County West Virginia Sheriff Eugene Crum was literally assassinated as he sat in his squad car eating his lunch. He had just taken office. Most mainstream news agencies were claiming that the motive was Sheriff Crum’s hard stance against illicit drugs. Tennis Melvin Maynard is currently being held as the primary suspect. 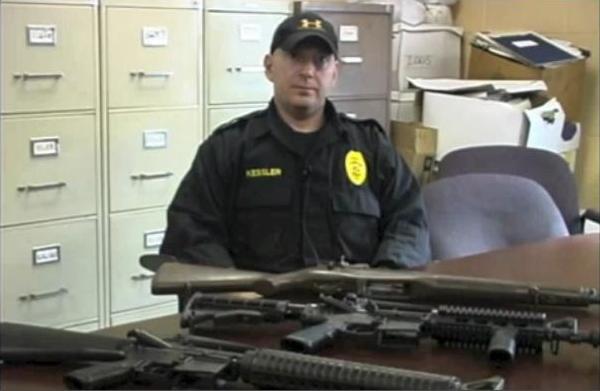 But rather than drugs, or even a criminal history of any kind, only mental illness is in Maynard’s past. The assassination of high-profile targets by proxy is no Hollywood myth. Such operations are made even more successful when unwitting dupes are backed up by trained professionals.

Before hanging up with him I mentioned to Chief Kessler that his efforts to legitimize citizen militias may have made him the most dangerous man in America, at least where the ruling power structure was concerned. Had he taken precautions to protect his reputation and even his life?

Mark Kessler laughed and told me that, although he took all threats seriously (such as the death threat he received on the internet just prior to the meeting), as we listened peacefully to each speaker, well-placed confidants were watching inside and outside the building, ready for anything.

As I pondered the conversation, I thought with foreboding that “anything” may be right around the corner.