In July of 2006, the muslim terrorist group “Hezbollah” conducted a pre-emptive strike against Israel from safe haven in Lebanon.

First launching rockets and mortars indiscriminately into Israel’s civilian border enclaves, the Islamists then sent RPG teams into Israel to attack an armored Humm-V patrol, killing 3 Israeli soldiers and taking 2 captive back to Lebanon. A nearby tank attempted to pursue the attackers but was hit by an Improvised Explosive Device, killing all 4 of the crewmen.

Israel responded, but not in a decisive manner, launching artillery and air strikes that did more to galvanize sympathy for Hezbollah rather than weaken the organization. At the same time, an Israeli naval vessel was damaged by a missile provided to the Islamist group from Iran and hundreds of “Katyusha” rockets were fired into Israeli population centers, some landing as far south as the port city of Haifa.

Psalms 83:1-8
A Song, a Psalm of Asaph.
1 O G-d1, do not remain quiet;
Do not be silent and, O G-d, do not be still.
2 For behold, Your enemies make an uproar,
And those who hate You have exalted themselves.
3 They make shrewd plans against Your people,
And conspire together against Your treasured ones.
4 They have said, “Come, and let us wipe them out as a nation,
That the name of Israel be remembered no more.”
5 For they have conspired together with one mind;
Against You they make a covenant:
6 The tents of Edom and the Ishmaelites, Moab and the Hagrites;
7 Gebal and Ammon and Amalek, Philistia with the inhabitants of Tyre;
8 Assyria also has joined with them;
They have become a help to the children of Lot. Selah.
New American Standard Update (capitalization and abbreviation added to correct disrespect)

If you take a few moments to look into the histories of the names mentioned, you may come to an astounding conclusion.

Certainly, the peoples who surround Israel (both then and now) despise her. But, surely, there must be differences between them all crossing so much time in human history.

It may be easier to say, “My grandparents were Teutons” which gives your bloodline—your “tribe”—and would tell us the location of where those people existed across the many changing borders and names of various nations.

Not coincidentally, this method would be immediately recognizable to any Middle Eastern people who also trace identity via tribes and bloodlines. Occasionally, there may be some guesswork because a tribe is not so well known to us, but if you have the resources, this is an effective technique.

The first tribal name that jumps out at us is that of “Ishmael”. Ishmael was the child that Sarah facilitated by telling Abraham to sleep with her slave (Genesis 16).

Although this made sense given the customs of the time, given that G-d had promised to make a great nation of the childless Abraham, it was not a good example of “the Father of Faith”. The child that resulted was Ishmael.

But that was not G-d’s Plan. Ishmael was not the son of Abraham and Sarah. He was the son of Abraham and Hagar. G-d would wait past even Sarah’s ability to conceive to prove the miraculous nature of their son Isaac. Soon Ishmael began to compete with Isaac and mock him out of fear for his legitimacy. Sarah would have none of it and pressured Abraham to banish both Hagar and Ishmael—certain death in the arid desert regions they were living in.

But Hagar cried out to the L-rd in her distress and He answered her, promising to make a great nation of Ishmael.

And that He did, for nearly all Arab muslims in the Middle East claim derivation from this son of Abraham. 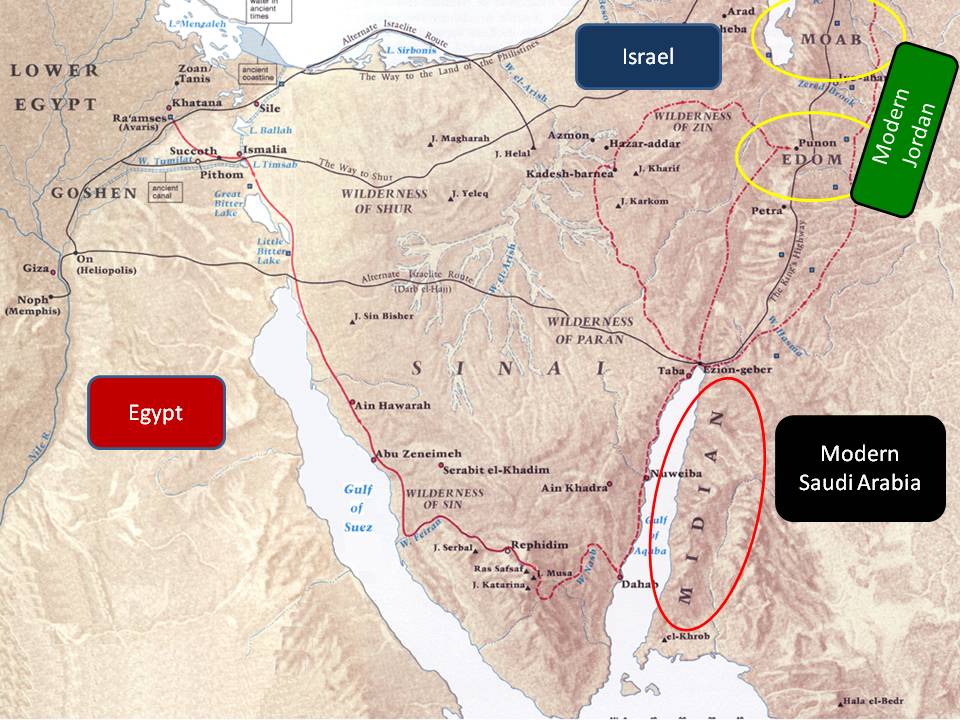 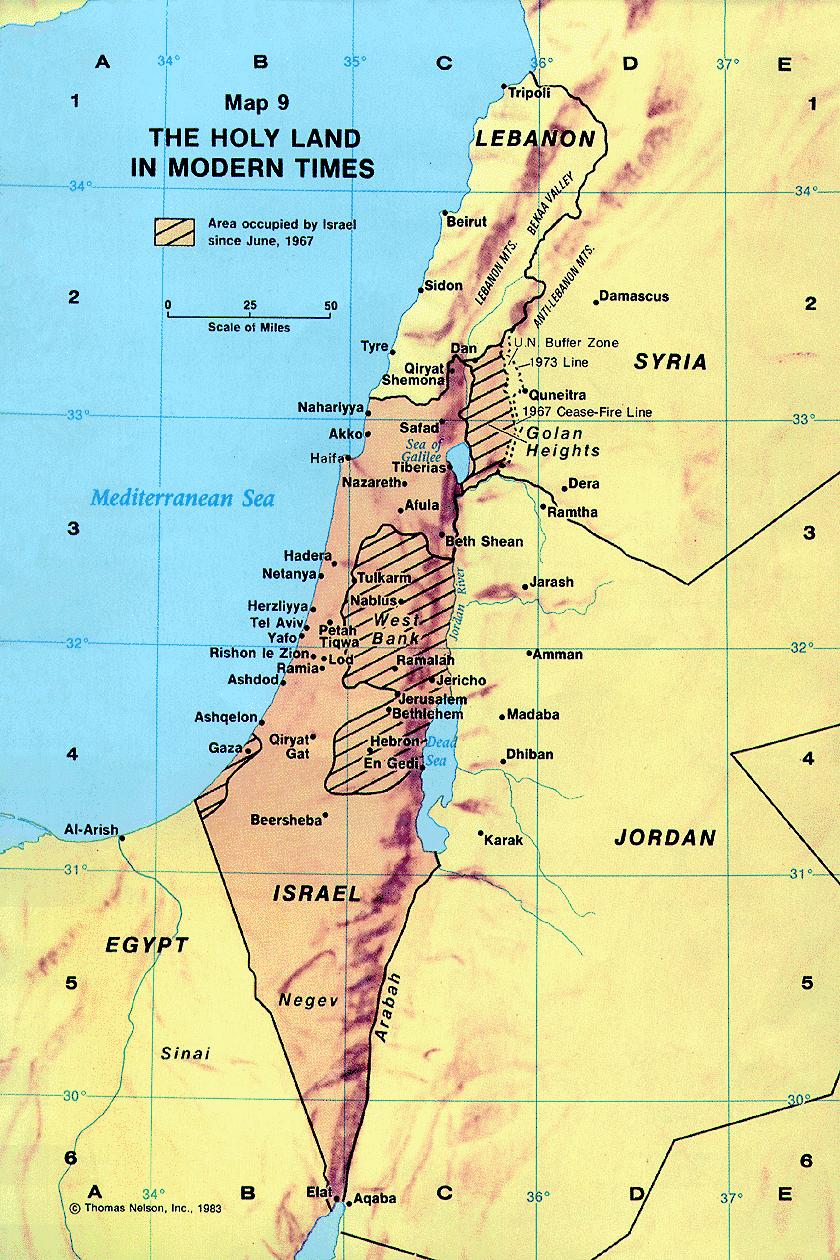 The tribe of Midian traces its lineage from a child that Abraham had with his second wife, Ketruah (after the death of Sarah). They can be considered a sub-tribe of Ishmael even though the lines are distinct and from different mothers—Ishmael is who they identify with [Fausset’s Bible Dictionary].

“Edom” traces their lineage to Esau, son of Isaac and brother of Jacob. Moab is derived from a union between Lot (the brother of Abraham) and one of his daughters. Having just escaped from Sodom, Lot and his 2 daughters fled to a cave in fear. After several days convinced they were the last living beings on the Earth, Lot’s 2 daughters proceeded to get him intoxicated enough to give them children; Moab and Ammon (Genesis 18 & 19). Obviously, Sodom was not a good place to grow up in.

“Tyre and Sidon” are today, modern Lebanon. That one’s easy because those two, powerful port towns have kept their names through the ages.

In (Arabic: عملاق,ʿimlāq‎) is the singular of giant, and the plural is (عمالقة, ʿamāliqah) or (عماليق, ʿamālīq), suggesting the sons of this tribe were known for being unusually tall.2

Not only were many of Israel’s neighbors filled with hatred for her, but they were also lead by genetically-altered super-warriors thanks to intermingling with demons.3

There were and are spiritual forces that constantly seek the demise of Israel.

Psalms 83:11-15
11 Make their nobles like Oreb and Zeeb
And all their princes like Zebah and Zalmunna,
12 Who said, “Let us possess for ourselves
The pastures of G-d.”
13 O my G-d, make them like the whirling dust,
Like chaff before the wind.
14 Like fire that burns the forest
And like a flame that sets the mountains on fire,
15 So pursue them with Your Tempest
And terrify them with Your Storm.
NASU

Just who are “Zebah and Zalmunna”?

Zebah and Zalmunna were two kings who lead hords of Midianites through Israel around 1150 B.C. G-d selected Gideon to deliver them and he did so in miraculous fashion (Judges 7, 8).

Gideon had intended to spare their lives once they were captured, but in interrogating them, he found that they had murdered his brothers during their raids of conquest through Israel and he executed them, himself.

The Midianites were simply doing what the nomadic Middle East peoples had always done; when you’re strong enough, you raid your neighbors, slaughter their men, rape their women, enslave their children and take their valuables.

In the 7th Century, a man named “Muhammad” codified this behavior and gave it a spiritual writ which would eventually be called “Islam”, which means … “SUBMISSION”.

There was much power in the monotheism of the Jews and Christians but which god to worship? Muhammad’s own background made him intimately familiar with the hundreds of pagan gods of the Meccan Ka’aba. It was said that there were so many you could worship a different god every day of the year.

“Hubal”, also known as “al Ilah”, the moon god was the one he eventually chose. It was a god very well known to Arabians.

Judges 8:21
21 Then Zebah and Zalmunna said, “Rise up yourself, and fall on us; for as the man, so is his strength.” So Gideon arose and killed Zebah and Zalmunna, and took the crescent ornaments which were on their camels’ necks.
NASU But is al Ilah/Allah simply a construct? Or is this god a real spiritual force?

If you believe the Bible to be the Word of G-d, there can be no doubt for you. While the prophet Daniel was deep in fasting and prayer on behalf of his home, Israel, the L-rd sent an answer to him through an angel.

But the angel didn’t arrive as soon as he was sent. Why?

Daniel 10:12-13
12 Then he said to me, “Do not be afraid, Daniel, for from the first day that you set your heart on understanding this and on humbling yourself before your G-d, your words were heard, and I have come in response to your words.
13 But the prince of the kingdom of Persia was withstanding me for twenty-one days; then behold, Michael, one of the chief princes, came to help me, for I had been left there with the kings of Persia.”
NASU (abbreviation added)

It would appear that angels and demons are given authority over nations; a fallen angel ruled Persia then (and certainly rules and directs Iran, now) and one of the most well-known archangels—Michael—watches over Israel.

Loyal angels humble themselves before men, refuse to be worshipped and state clearly that we all are in service to the L-rd (Revelation 19:10).

Fallen angels impersonate G-d and seek to steal worship that is rightfully His:

Deuteronomy 32:15-17
15 “But Jeshurun grew fat and kicked —
You are grown fat, thick, and sleek —
Then he forsook G-d who made him,
And scorned the Rock of his Salvation.
16 They made Him jealous with strange gods;
With abominations they provoked Him to anger.
17 They sacrificed to demons who were not G-d,
To gods whom they have not known,
New gods who came lately,
Whom your fathers did not dread.”
NASU (capitalization and abbreviation added to correct disrespect)

And this brings us to the crux of Psalm 83: it is a call upon G-d to vanquish the enemies who surround Israel. Every tribe mentioned here (and in other judgment passages of Scripture) point towards, what are today, nations governed by Islam—Turkey, Jordan, Syria, Egypt, Iran, Saudi Arabia and even the once-Christian Lebanon is now ruled or bullied by muslim extremists.

But just as Gideon vanquished the moon-god worshipping Midianites, the Messiah of Israel will arrive (return) and vanquish her enemies when she calls upon Him. 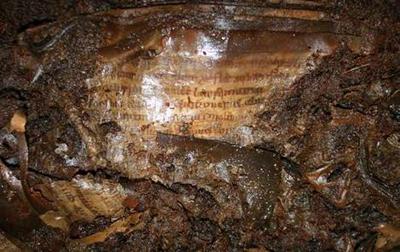 In July of 2006, in the heat of the Israel/Lebanon conflict, a construction worker made an astounding discovery near the town of Fadden More, Ireland; a medieval Christian prayer book (called a “psalter”), preserved in a bog for over a thousand years. Experts hailed it as the European version of the Dead Sea scrolls, and immediately called it a find beyond an ability to value.

The psalter was open to Psalm 83.

How often have you heard a Christian say the words “Oh my God!”? It is a vain (meaningless) usage of His Name and qualifies as blasphemy.

So, in an effort to draw the attention of Christians to this issue, I have taken the tradition of Orthodox Judaism which hyphenates the Name of G-d out of respect for that Name.

Interestingly enough, a scrap of a copy of the Gospel of Matthew (known as “The Magdalene Papyrus”) that has been astoundingly dated to between 73 and 74 A.D. writes the Name of Jesus as “J-s”.

However, I have chosen to not follow suit because of what I see as one of the most miraculous aspects of the Gospel: that G-d emptied Himself into the form of a man to put a Face and a Name to Who He is to us so that is a Name we should know with loving familiarity…